Today I’m starting a series on Omaha, Nebraska’s Temple Israel Cemetery. When I was visiting Christi in fall 2017, I was hopeful I could visit because it’s there that the ashes of Emil Brandies, Omaha’s only Titanic disaster victim, are buried.

What Younker’s was to Des Moines, Brandeis was to Omaha. Emil was part of the Brandeis family who established a much-beloved chain of department stores in Nebraska in the 1880s. Ask anybody over 50 who grew up in Omaha what they remember about J.L. Brandeis & Sons Department Stores and the stories will start pouring out. Purchasing a first party gown, working at the jewelry counter, marveling at the window displays, and meeting friends in the Tea Room are just a few glimpses of its history. 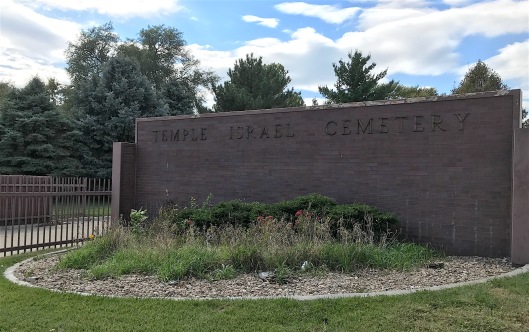 Temple Israel Cemetery is also known as Pleasant Hill Cemetery but there’s another cemetery by that name in Omaha as well.

Established in 1871, Temple Israel Cemetery (a Reform congregation) is the oldest Jewish cemetery in Omaha but not the only one. There are several others that came later.

According to Temple Israel’s website, Max Meyer, Emmanuel Simon, and Meyer Hellman formed the B’nail Israel Society in March 1871 when they recognized the need for a sanctified Jewish burial ground. In August 1871, they bought five acres for a cemetery at 42nd Street and Redick Ave. The B’nai Israel Society deeded the cemetery property to the Congregation of Israel, which later became Temple Israel.

Within the Temple Israel Cemetery are separate sections for B’nai Jacob and B’nai Shalom Cemeteries. Find a Grave notes there are about 800 graves recorded for Temple Israel but I think there are many more that just haven’t been photographed or had memorials made for them yet.

J.L. Brandeis and his sons created a memorable shopping experience for their customers.

According to a detailed two-part article by journalist/blogger Leo Adam Biga, the Brandeis family has roots in Prague in what is now the Czech Republic. Born in 1837, Jonas Leopold (J.L.) Brandeis was an Austrian-Jewish immigrant who arrived in America in his late teens. He started as a merchant in Wisconsin, where he did business with Indians. Francesca “Fannie” Teweles of Milwaukee married him in 1862 and the couple started their family in Manitowoc, Wisc. They had four children that lived to adulthood, three boys (Arthur, Hugo, and Emil) and one girl (Sarah).

After moving the family to Omaha in the 1880s, J.L. started building his first venture, The Fair, on South 13th Street. By 1888, he and his sons were full partners when they rented a new site at 114 South 16th Street, calling it The Boston Store. The J.L. Brandeis & Sons name first appeared over the door there and would appear on building plates on all future Brandeis stores. An 1894 fire that destroyed a second store didn’t keep J.L. down and he built a bigger, better store on the same site at the northwest corner of 16th and Douglas.

J.L. and Fanny got active in local organizations right away, with J.L. helping establish one of Nebraska’s first synagogues. He and relative Carl Brandeis (who is also buried at Temple Israel) worked together to create a chapter of the Independent Order of B’nai B’rith. An Omaha chapter was founded by Carl.

Emil became a member of the firm in 1885 at the age 21, where he eventually directed the planning, building, and maintenance of the Brandeis buildings. He was also responsible for the general oversight of the men’s goods department.

After J.L.’s death in 1903, Arthur became president. Emil continued to supervise construction and maintenance of the company’s building projects. Hugo sent buyers to foreign markets and managed the store’s sales policies. Cousin George Brandeis was brought in and his skills would prove timely later.

A bachelor, Emil enjoyed working with his brothers and traveled a great deal. In late January 1912, he went to Europe to visit his niece, Mrs. Irving Stern (Ruth, the daughter of his brother Arthur) and her husband in Italy. The trio traveled through Spain, Egypt, and Rome to Vevey, Switzerland, where they visited his sister, Sarah Brandeis Cohn. Sarah had been widowed less than a year.

Portrait of Emil Brandeis as a young man, who was only 48 when he died in 1912 when the Titanic sank.

Emil arranged to return home on the Titanic, which had received much press for its elegance and speed. Much of his time on the ship was spent with old friends, Mr. and Mrs. Henry B. Harris. After the ship hit the iceberg and and evacuation started, Mrs. Harris was placed in a full lifeboat. She later said and as it pulled away that she saw Emil and her husband standing among the men on deck, awaiting their fate, she reported, “without fear.”

One rumor spread at the time was that Emil put on women’s clothing in order to try to get a place in a lifeboat but that was quashed by other survivors who saw him as Mrs. Harris did among the men on deck that night.

Emil’s body was recovered by the crew of the cable repair ship, the CS MacKay Bennett. Among his effects were diamond cuff links, a gold knife, a gold pocket watch, a platinum and diamond watch chain, a gold pencil case, a gold ring, a gold cigarette case and match box, a pearl tie-pin and a 500 franc note. His pocket watch was part of an exhibit a few years ago at Omaha’s Durham Museum.

Many books and articles claim that Emil’s body was brought back from Halifax, Nova Scotia to Omaha for burial at Temple Israel Cemetery. But according to a May 4 article in the Omaha Bee, his body was sent from Canada to Chicago first. An Omaha funeral director hired by the Brandeis family traveled to Chicago to receive Emil’s body, oversee his cremation, then bring his ashes home. The Chicago crematory is not named in the article, but I suspect it was the one at Graceland Cemetery. Many well-known wealthy Chicagoans are buried there and it was one of three cemeteries in the city that had a crematory at that time. 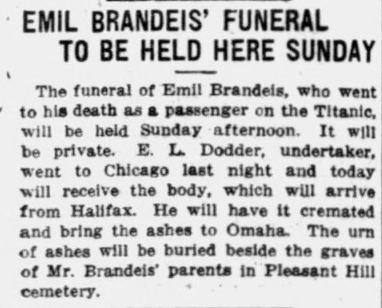 From the May 4 edition of the Omaha Daily Bee, I learned that Emil Brandeis was cremated before his ashes were buried at Temple Israel Cemetery.

At first, I wondered why a Jewish family would have a family member cremated because in the Jewish faith, a body is traditionally buried within 48 hours of death. Then it occurred to me that the tragic circumstances surrounding Emil’s death prevented that. By the time his remains were brought to Chicago several days after the tragedy, they were in poor condition. The Brandeis family were also Reform Jews, whose congregations tend to have less conservative religious beliefs. So cremation made a lot of sense.

A large memorial service held on April 21 at the Brandeis Theater was attended by many Omahans. Emil’s graveside funeral at Temple Israel Cemetery was private. His ashes were buried beside his parents’ graves (Fanny died in 1905) on a Sunday in early May.

Emil’s brother, Hugo, would die only a few months later.

Sadly, brother Hugo died in July of that same year after an operation. He is also buried at Temple Israel. That left Arthur to run the business and cousin George Brandeis proved invaluable with his leadership. In 1914, Arthur handed the store’s leadership to George and become vice president of Stern Brothers dry goods store in New York.

When Arthur died in 1916, his will left in excess of $1 million in personal property and real estate in a trust to his young son, E. John Brandeis. George would mentor E. John and eventually Arthur’s son would take over the reins from George.

At its zenith in the early 1970s, the family-owned retail chain grew to 15 stores, 3,000 employees, and $100 million in sales. But as more shoppers headed to suburban malls, the flagship store became an albatross. When it closed in 1980 as part of a general downsizing, it marked the end of an era. Younker’s bought Brandeis’ remaining stores in 1987.

A few days before I started writing this post, I saw an article in the Omaha World-Herald that the Brandeis Mansion, built in 1904 for Arthur Brandeis and his wife, Zerlina, has been fully restored and is enjoying a comeback with new owners. Christi has attended parties there in recent years. Omahans are pleased to see a happy piece of their past is still alive and well.

I’ll be back next week with more stories from Temple Israel Cemetery.

Now known as the Brandeis-Millard Mansion, the 1904 home has been fully restored. (Photo source. brandeismansion.com)