There are several cemeteries that I often talk about visiting, but find myself not being able to make it happen. Rose Hill was in that category for years. Located about 100 miles and 2.5 hours from my house, it’s not that far away. But I don’t usually have that kind of time to set aside when I’ve got a house to run and a family to take care of.

But in April 2018, I finally made the trip. My husband and son were on a Boy Scout camping trip all weekend. My friend and fellow taphophile (cemetery enthusiast) Cathy and her roommate, Lynn, wanted to come along. When Cathy volunteered to drive, I was flying out the door.

We set out on a Sunday morning, the weather already promising to be hot and humid. That’s just a given in Georgia, even in April. You’re going to sweat! 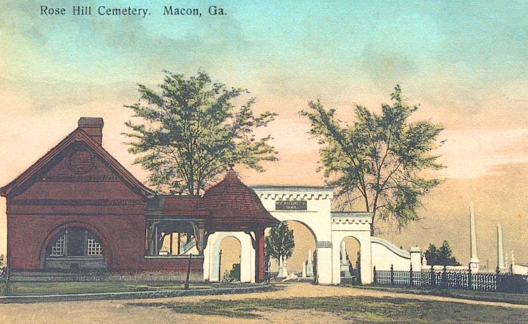 Rose Hill is not the oldest cemetery in Macon but it is the largest at about 65 acres. In 1836, Macon was growing so a committee was named consisting of Simri Rose, Jerry Cowles, J. Williams, and Isaac Scott. They selected its location on the banks of the Ocmulgee River.

Simri Rose played the largest role in its planning, wanting to model the cemetery after the park-like grounds of Cambridge, Mass.’s Mount Auburn Cemetery. He set about planning the carriageways and plots, and planting many trees and shrubs, some of which were imported.

An ambitious newspaperman, Simri Rose was also instrumental in planning the city of Macon and the cemetery that would eventually be named after him.

A newspaperman who founded what would become the Macon Telegraph, Rose was also a botanist, horticulturist, and florist. Because of his efforts in planning the cemetery (and other parts of the city), the mayor and council voted to name the cemetery after him and gave him his choice of lots.

This is how the front gates looked in April 2018.

Undoubtedly, the most famous residents of Rose Hill are the Allman brothers, Duane and Gregg. The two were part of the Southern Rock band the Allman Brothers. Buried with them is bandmate Berry Oakley. Thousands visit their gravesites every year.

That in itself would make them appropriate to write about. However, the Allman Brothers stand apart because they had a strong bond with Rose Hill Cemetery from the time they arrived in Macon in 1969 from Florida. It was a place of inspiration they valued and returned to often, especially in their early days when money was scarce but music was flowing freely.

The nature of that time was not always about music. Gregg Allman went so far as to say, “I’d be lying if I said I didn’t have my way with a lady or two down there.” While I’m hopeful that’s not going on at the cemetery now, I’m sure Gregg was not the only fellow doing so back in those days.

I won’t got into the history of the band. But I want to share some of the lasting legacy of their relationship with Rose Hill and how Southern Rock pilgrims continue to make the journey to their graves to pay their respects.

Duane Allman’s death devastated bandmate Berry Oakley (left), sending him into a dark depression before his death the next year.

Before our visit, I was not an especially big fan of the band and didn’t know much about them. My favorite song of theirs has always been “Jessica”.  Their songs “Whipping Post”, “Midnight Rider”, “Statesboro Blues” and “Melissa” are probably better known.

Slide guitar player and founding band member Duane Allman died at the age of 24 on Oct. 29, 1971 in a motorcycle accident. He was the first to be buried at Rose Hill. Bass player Berry Oakley died (or was “set free” as his marker says) on Nov. 11, 1972, also in a motorcycle accident that was only a short distance from where Duane died. He is buried beside Duane.

Because of the large numbers of fans that visit the graves, a fence was erected around them as protection. But it is easy to get a good photo through the fence posts and you can easily make out the inscriptions. A steady stream of visitors came by when we were there.

The gravesites of Duane Allman and Berry Oakley as they looked in April 2018.

Gregg Allman passed away at the age of 69 from liver cancer in 2017, bringing enormous crowds to Rose Hill to pay their respects at his funeral. His former wife, Cher, was present among the many celebrity mourners.

When we visited Rose Hill, work had not begun on combining Gregg’s plot with Duane and Berry’s. It was cordoned off with plastic-flower encircled chains at the time, as you can see.

In April 2018, work had not yet begun on incorporating Gregg Allman’s grave into the plot with his brother and bandmate Berry Oakley.

The chains around Gregg Allman’s grave were wound with plastic flowers. Fans left several mementos. Notice the peace sign made out of sticks.

When I checked recently to see if progress had been made, I saw that much work had been done. Thanks to the photos of Mike Goldwire and Lou Evatt on Find a Grave, I was able to see it. Gregg’s new stone had been installed. The Allman family funded the entire project. It’s uncertain who the other empty plots are planned for.

The band’s song “In Memory of Elizabeth Reed” is actually based on a woman band member and guitarist Dickey Betts was dating at the time he wrote the song in 1970. To hide her identity, Betts named it after a woman buried at Rose Hill, and her grave is located not far from the band’s plot. But many think the song was based on the real Elizabeth Reed herself.

I didn’t know where Elizabeth’s grave was was when we visited so I’m using a photo from Find a Grave. As the band’s first instrumental number, I wasn’t familiar with the title but when I pulled it up online to listen to it, I remembered it at once.

I had not heard of the title “In Memory of Elizabeth Reed” but when I found it on Youtube, I recognized the tune as soon as it started. (Photo source: Dave Kyle, Find a Grave)

Elizabeth Jones Reed came to Macon to attend Wesleyan College. She married Confederate Army Captain Briggs Hopson Napier on April 26, 1865 and they had 12 children. Three died before reaching adulthood. The couple were farmers and Briggs Napier was at one point editor for the Monroe County newspaper. The couple also operated a local pub in Macon in the early 1900s. Elizabeth died at the age of 89 on May 3, 1935.

The song “Little Martha” has a similar situation attached to it as the one with Elizabeth Reed. Many web sites claim the monument to 12-year-old Martha Ellis was the inspiration for the song. Again, that’s not exactly true. While the band members passed by Martha’s monument often and knew her name, the tune was considered by Duane Allman to be an ode to his then-girlfriend Dixie Meadows. He sometimes called her Martha because of her affection for vintage clothes. Duane would tell her, “You look like Martha Washington.”

Born in 1883 to Theodore and Eugenia Ellis, Martha was the youngest of their seven children.

But like Elizabeth Reed, Martha Ellis was real. Her father was a Civil War veteran who worked as a druggist before becoming a lumber merchant. Mother Eugenia Rogers was the daughter of Dr. Curran Rogers of Thomaston, Ga. Born in 1883, Martha was the youngest of their seven children. 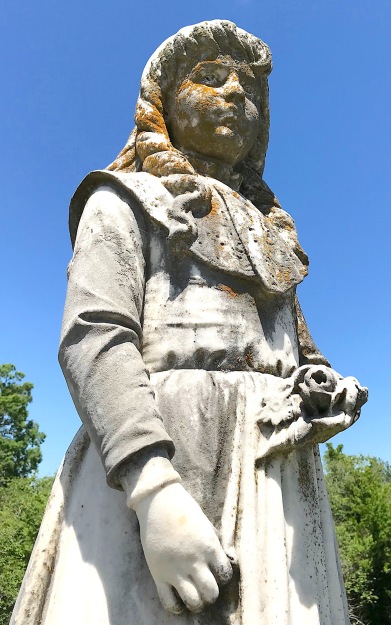 Martha Ellis died of peritonitis in 1896.

Only a month before her 13th birthday in January 1896, Martha died of peritonitis (inflammation of the tissues of the stomach). The funeral was held at the Ellis home and she was buried at Rose Hill. Her parents died within two months of each other in 1923 and rest in the plot beside Martha.

“In the Sweet Bye and Bye”

The inscription on Martha’s monument reads:

She was love personified
and her memory is a sweet solace by day,
and pleasant dreams by night
to Mamma, Papa, brothers and sisters.
We will meet again in the sweet bye and bye.

The back cover of the Allman Brothers’ first album, aptly titled “The Allman Brothers Band” features the Bond family tomb, which was the last place in the cemetery that we visited. I had no idea that this site was so important when we were there but I’m glad I photographed it.

Here is the actual Bond monument above the tomb. Time, vandalism, and tornadoes have had their way with it over the years. At one time, there were supposedly four figures surrounding the base but they are long gone.

Joseph Bond was a prominent cotton grower who died at the hands a former employee.

Born in 1815, Col. Joseph Bond was thought to be one of the wealthiest men in middle Georgia before the Civil War. According to Find a Grave, he was the state’s largest cotton grower and most successful planter. I’m not sure if that’s true. It’s reported that in 1857, he set a world record with a cotton sale of 2,200 bales for $100,000. On March 12, 1859, at the age of 44, Bond was killed by a former overseer he had employed by the name of Brown. 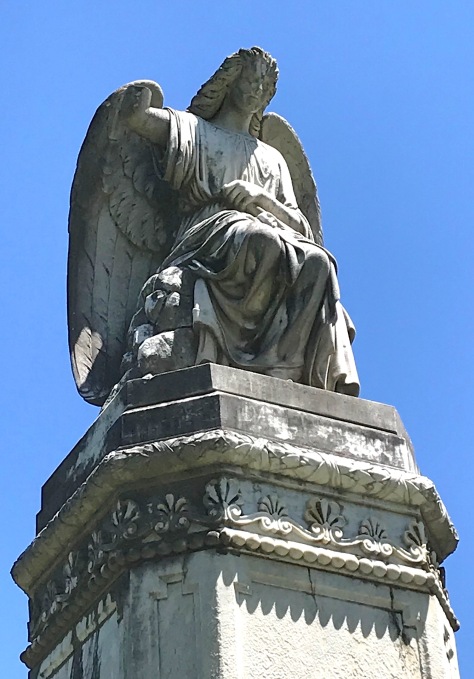 The Bond angel is missing part of her arm.

You take these steps from the Bond monument down to the tomb. The Ocmulgee River is in the background.

Here’s the back cover of the Allman Brothers Band album.

Take a look at what the tomb looks like today. As you can see, it gets a lot of attention from fans and at times, there’s been graffiti spraypainted on it over the years.

After our visit to Rose Hill, we enjoyed a very late lunch at H&H Soul Food Restaurant. It was another favorite haunt of the band. Founded in 1959 by Inez Hill and Louise Hudson, H&H briefly closed when Mama Hill died but reopened with Mama Louise’s blessing. The two were life-long friends of the band, and photos of the musicians are all over the restaurant.

I know when we walked out into the hot Macon sun with full stomachs that I can see (and taste) why people return to H&H year after year to chow down on their home-grown goodness.

At the same time, there’s a lot more to Rose Hill than the Allman Brothers. I’ll be back with more of that next time.