Last week, I shared the story of Southern Rock band the Allman Brothers’ connection with Macon, Ga.’s Rose Hill Cemetery. This week, we’ll go back a little further in history to explore the lives of some more of its residents.

Some of the information in today’s post is from work done before I ever visited Rose Hill. Stephanie Lincecum has been exploring and researching Southern cemeteries for 15 years. She has a few different blogs going, along with her main page Southern Graves. Her information has proven invaluable in my quest to get the stories behind the stones at Rose Hill. Thank you, Stephanie! 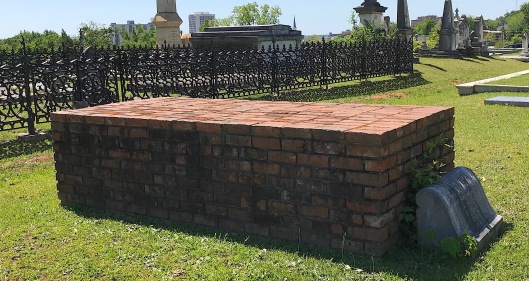 What looks like a plain brick box is actually the first grave at Rose Hill Cemetery from 1840.

One thing I forgot to include last week was the first recorded interment at Rose Hill, which happened after the death of Caroline Danielly Wilson on Feb. 28, 1840. She was the wife of Col. David Wilson. The lot was owned by her brother-in-law, Alexander McGregor. Col. Wilson is not buried with her. I did find out he was one of Macon’s first aldermen, elected in 1833.

Caroline’s sister, Elizabeth, was McGregor’s first wife. He was a carpenter who died in 1856 of “bilious colic” at the age of 60. 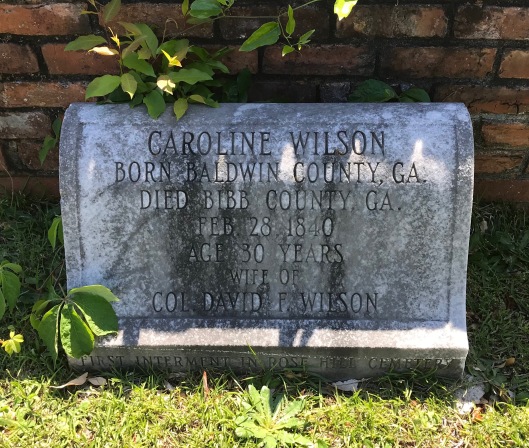 I don’t know where Col. Wilson is buried. It is likely he remarried.

One of the first grave markers I saw after we’d driven through the front gates and parked was for a dog. That’s something you don’t see every day in an older “human” cemetery. But clearly this canine was special and it soon became clear that he was. 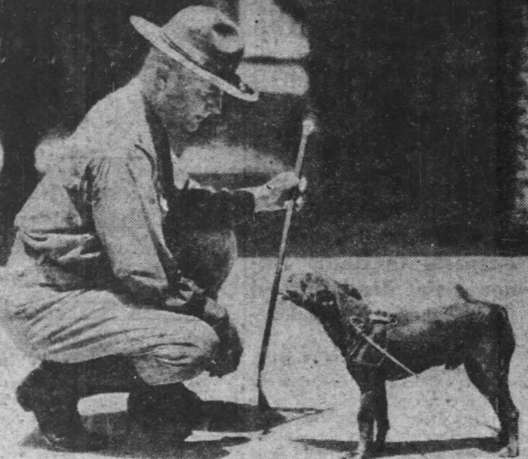 This photo was from a 1930 Atlanta Constitution article about the 121st Infantry’s summer training at Fort Foster in Jacksonville, Fla. You can see a tiny saber attached to a harness on Lieutenant Bobby’s shoulder.

The brown terrier that became known as “Lieutenant Bobby” belonged to Capt. David Clinton (D.C.) Harris, Jr. Born in Macon in 1897, Harris served overseas during World War I. Shortly afterr, he was attached to Company C of the 121st Infantry Division of the National Guard stationed at Fort Benning, Ga. They were known as Floyd’s Rifles, a nickname from their Civil War days. 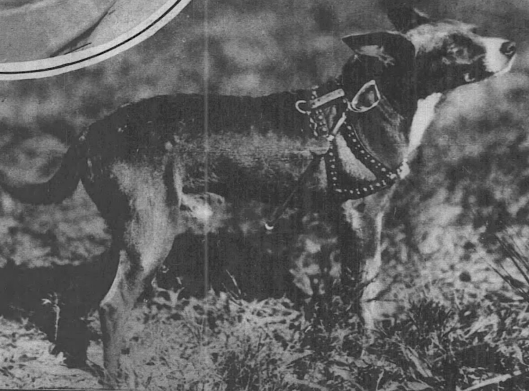 This 1933 photo of Lieutenant Bobby was part of a photo montage in the Atlanta Constitution. Again, you can see the saber on his shoulder.

Capt. Harris took Bobby with him everywhere and he soon became a favorite with the soldiers. Bobby received his commission as lieutenant in 1928 when papers were submitted stating that the dog had given years of faithful service. Apparently, President Calvin Coolidge signed the request and the terrier became the first dog to be commissioned in the U.S. military.

Death of a Loyal Friend

Lieutenant Bobby was buried in the Harris family plot at Rose Hill with full military honors on Feb. 9, 1936. 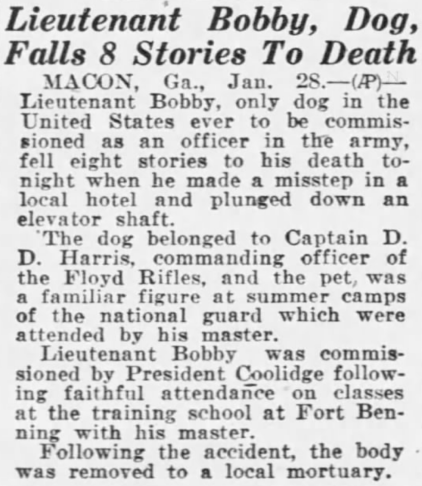 Several stories were written about Lieutenant Bobby’s death in the Atlanta Constitution. 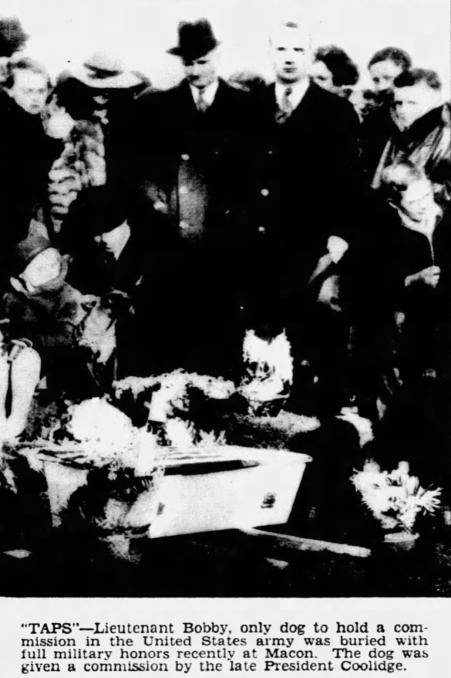 This is an Atlanta Constitution photo of Lieutenant Bobby’s funeral at Rose Hill Cemetery on Feb. 9, 1936.

After Capt. Harris died on July 6, 1943 at the age of 46, he was buried beside Lieutenant Bobby. He was 46. I have no idea if Capt. Harris was married, had children, or how he died. His father, David Clinton Harris, Sr., is buried in the same plot. 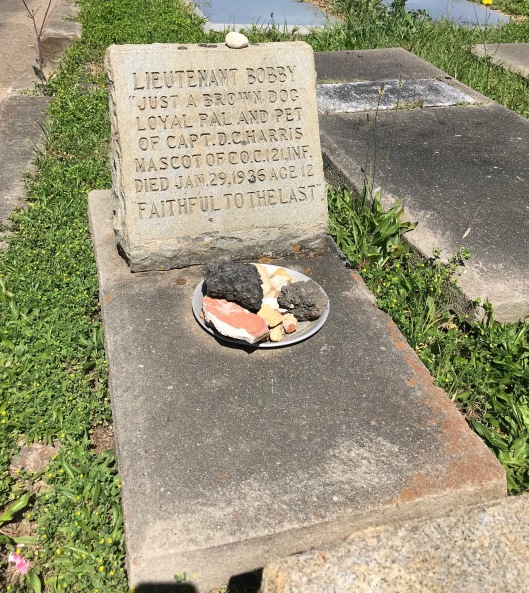 “Just a Brown Dog” Lieutenant Bobby was much loved by the men of the 121st, Company C.

Not far away from Lieutenant Bobby and Capt. Harris’ graves is the Hammond family plot. I include them because not only does it contain what I believe is the only one of two white bronze (zinc) markers in the entire cemetery, it also includes two cast iron grave coves and those are even more rare. 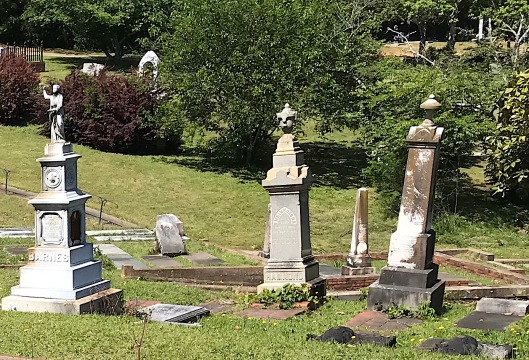 Not a great photo of the family plot but you can see Rosa Ida Hammond Barnes’ white bronze monument on the left.

A native of Pickens County, S.C. born in 1806, Dudley Whitlock Hammond married Martha Eleanor Speer. He studied medicine in Charleston, S.C. before they moved to Monroe County, Ga. The Hammonds settled in Macon in 1853 and later, Dr. Hammond treated many Confederate soldiers during the Civil War.

Dr. D.W. Hammond was one of the state’s oldest surgeons still in practice when he died in 1887.

An Atlanta Constitution article about Rosa Ida Hammond Wiley’s demise. No cause of death is listed.

Rosa’s handsome white bronze monument is topped by a figure holding a Bible.

A Flower Just Blooming Into Life,
Enticed an Angel’s Eye
Too Pure for the Earth, He Said, “Come Home,”
And Sade the Floweret Die.

Buried beside Rosa is her oldest daughter, Minnie Barnes Bradley. She died in 1927 at the age of 51.

Younger daughter, Nettie, married twice and her husbands were brothers. First husband Henry Ross, an insurance salesman, died in 1905 when he fell from a moving train. Some thought he might have been pushed. Their daughter, Rosa, was named after her grandmother but died at the age of three in 1902.

Nettie then married Dr. Samuel Ross. She died in 1925 at the age of 44. She is listed as being buried at Rose Hill but there is no photo of her marker on Find a Grave. Henry Ross and Dr. Samuel Ross are both listed at a different cemetery in Jones County, Ga. Find a Grave has a photo of Samuel’s grave but none for Henry, whose obituary states he was to be buried at “the old family burying ground.” 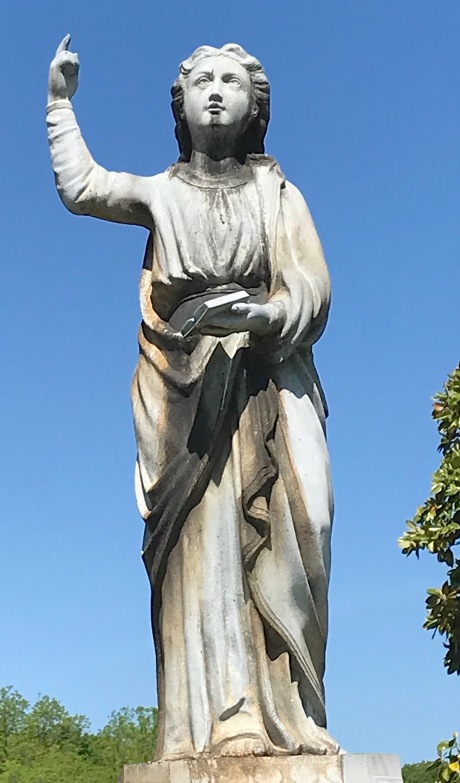 This white bronze (zinc) monument to Rosa Ida Hammond Barnes is one of only two white bronze markers that I saw at Rose Hill.

Very close to Rosa’s monument are two very rare cast iron grave covers whose name plates have been lost to time. But I think they were most likely two of her sisters who died in infancy. 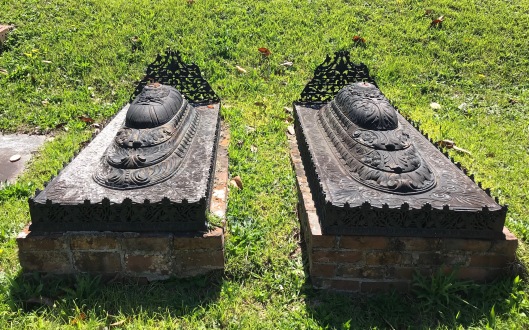 These cast iron grave covers, the brainchild of Joseph A. Abrams of Birmingham, were made for a short time in the 1870s. 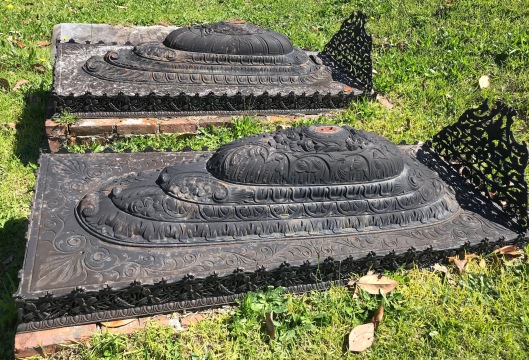 As I wrote some time ago, Joseph Abrams patented his cast iron grave covers in the 1870s and they can be found mostly in the Southeast. They were usually meant to protect the graves of children. Because of the fragile nature of the fretwork on the nameplates, many of those have vanished over the years. Several are also missing the finials on the top center of the cover, as are these. The finials were often molded in the shape of a sleeping child, a seashell, or the Bible.

“A Pure and Upright Man”

On Dr. Hammond’s marker is the epitaph:

He Died as He Lived
A Pure and Upright Man

One of the more tragic stories I found came from looking up information on the marker for Lt. Robert Burgess and his wife, Rebecca Artope Burgess. Southern Graves provided much of the story you will read below.

Born around 1834 in England, Robert George Burgess was the son of Robert Burgess and Jessie Miller Burgess. The family soon moved to America and were settled in New York by about 1838. After the father’s death, the rest of the Burgesses moved south to settle in Macon around 1856.

In 1862, Robert joined the Confederate Army with Capt. Massenburg’s Battery, Jackson Artillery. On March 10, 1864, Robert married Rebecca Artope in Macon. James B. Artope and Susan Raine Artope were her parents.

James was a marble cutter and stone mason who hailed from Charleston, S.C. In fact, you can see some of his work at Rose Hill Cemetery. Until I started looking more closely at my photos this week, I hadn’t realized it. In one of the Jewish sections at Rose Hill, the Waxelbaum boys share a marker with James Artope’s name on it. You can see it to the bottom right beneath “Waxelbaum”. 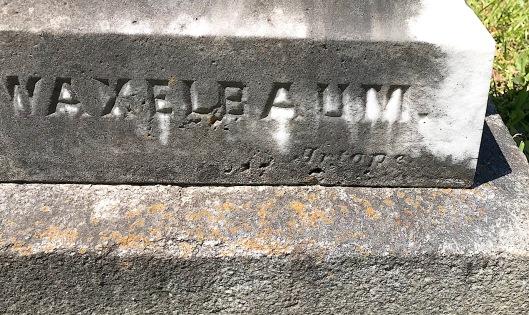 Most grave markers are not signed but James Artope left his name on this one for the Waxelbaum boys. 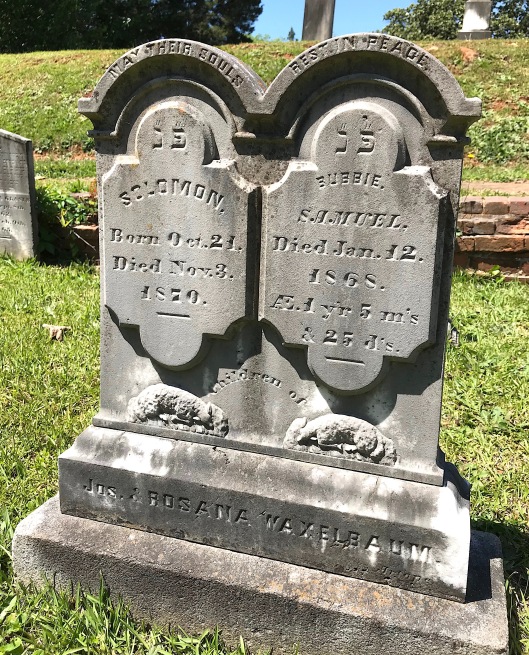 Brothers Solomon and Samuel “Bubbie” Waxelbaum died within two years of each other. Their parents are buried in Salem Fields Cemetery in Brooklyn, N.Y.

Tragically, Robert and Rebecca’s marriage only lasted five months. Robert’s obituary in the Macon Telegraph on Aug. 27, 1864 explains why:

Death in any form is sad, but to be suddenly snatched from earth while in the enjoyment of health and usefulness is sad indeed. Lieut. R. G. BURGESS, the subject of this notice, while examining an Ammunition Chest in Massenburg’s Battery, was almost instantly killed by the explosion of the chest, on the 12th inst. He lived about four hours after the accident occurred, and death came and relieved him of the intensest agony. 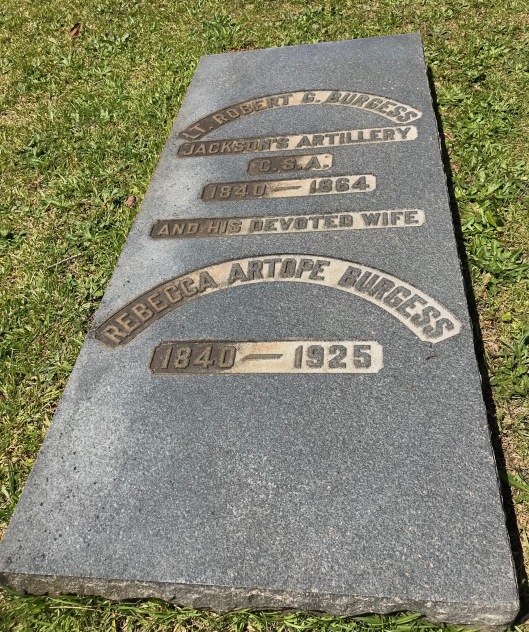 The Artopes would grieve again when Rebecca’s unmarried sister Julia Elvira Artope died in 1868. I believe she was in her 30s. Her monument is located in the Artope plot. I am fairly certain that her father, James, carved it himself but I did not see his name on it. At the top, it says “Meet Me In Heaven.” 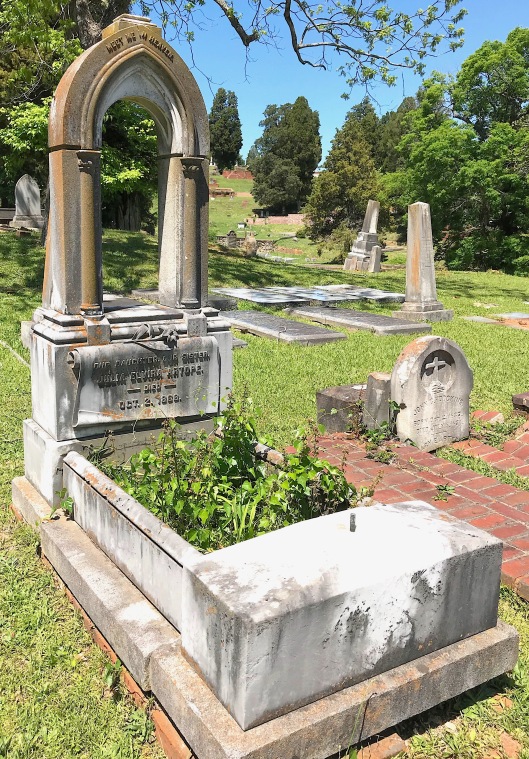 While Julia Artope’s monument appears to be unsigned, her stone carver father most likely did the work. 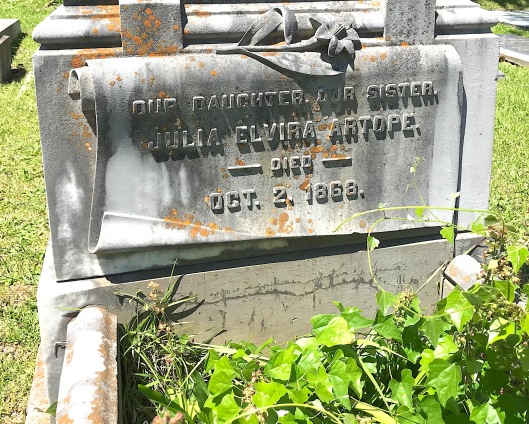 Julia was most likely in her 30s when she died.

James died in 1883 and his wife, Susan, died in 1901. They are buried together with several of their children at Rose Hill.

Rebecca never remarried after Robert’s death. In her later years, she shared a home in Macon with her mother, her spinster sister, Susan, and her bachelor brother, William. She died in 1925 and was buried at Rose Hill. 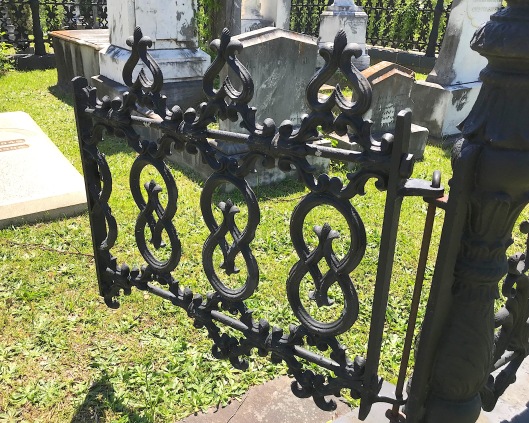