Do you remember the old TV show “Gilligan’s Island”? During the show’s first season, the  theme song, near the end, included a lyric that goes, “And the rest!” That was the Professor and Mary Ann. As a bit of trivia, Bob Denver (who played Gilligan) demanded his costars be included in the song so it was changed in future seasons.

That early lyric fits the mood of today’s post as I wrap up my series on Macon, Ga.’s Rose Hill Cemetery. Here is “the rest” that deserves to be mentioned and talked about.

It should come as no surprise that there are a lot of Confederate soldiers buried at Rose Hill Cemetery. Some died in battle, others in hospitals of disease and the rest who survived the war and died later in life. According to a plaque, Macon became a key location for Confederate hospitals during the Civil War. Only Richmond, Va. is thought have had a greater number of wounded.

The first Confederate dead interred at Rose Hill were four of seven Macon soldiers who were killed in battle in Pensacola, Fla. in 1861. They are in the first row of what is known as Soldiers’ Square at Rose Hill. According to one witness, a thousand people attended the funerals. 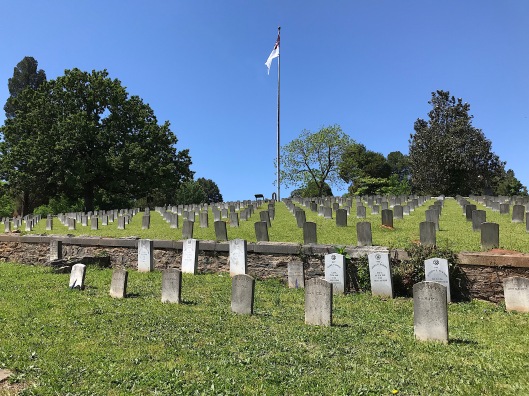 An estimated 1,746 are buried in Soldiers’ Square at Rose Hill Cemetery.

After the war, Ladies Memorial Association president Jane Lumsden Hardeman initiated an effort to move those Confederate dead buried at various hospitals around the area to Rose Hill. She erected wooden headboards with the name, company, regiment and date of death for each soldier. She also helped organize the first Confederate Memorial Day at Rose Hill on April 26, 1866. 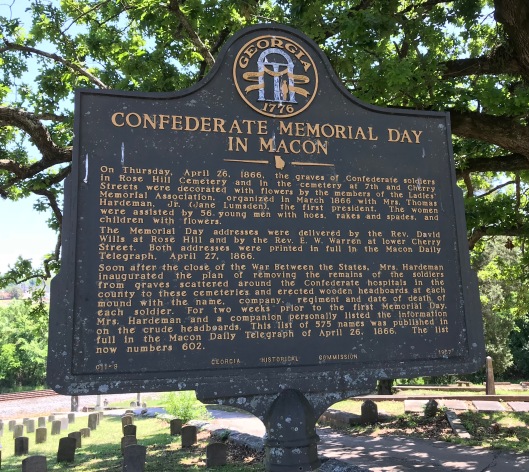 A plaque describes the efforts of Jane Lumsden Hardeman to bring the Confederate dead buried at other sites around Macon to Rose Hill Cemetery.

The Book of Life

Sometimes I like something just because it’s different than the norm. The grave marker for Edwin Summers Davis and his wife, Camille Johnson Davis, fits the bill.

Born around 1877, Edwin was the son of Confederate veteran Capt. William A. Davis, who was a prominent banker in Macon and a member of just about every fraternal organization from the Masons to the Odd Fellows to the Elks. 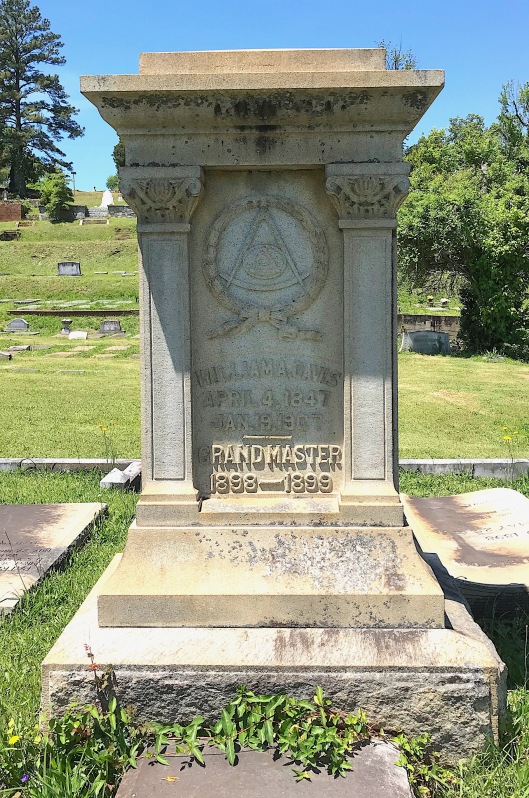 Capt. William A. Davis was Grand Master of his Masonic Lodge between 1898 and 1899, along with being a member of several other fraternal groups.

Edwin got his degree at Macon’s Mercer University and married Camille Johnson in 1898. Most of his career was in selling insurance. The couple had three children.

Camille died first in 1931 of a cerebral hemorrhage. Edwin lived another 29 years before dying in 1960. Their “open book” marker is in the Davis family plot. It’s a clever way to present all the pertinent information. 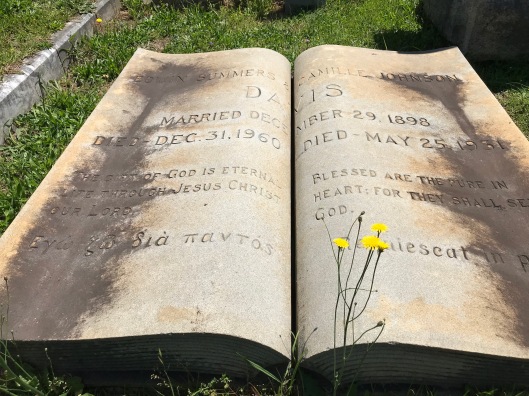 You can even see the indentations of the “pages” on the side. 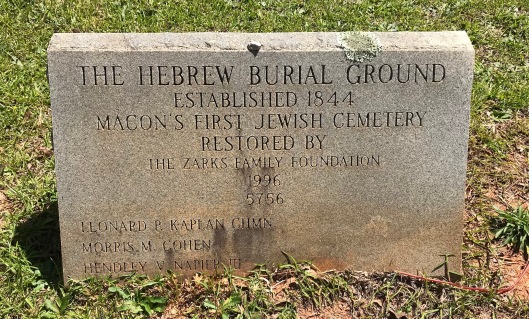 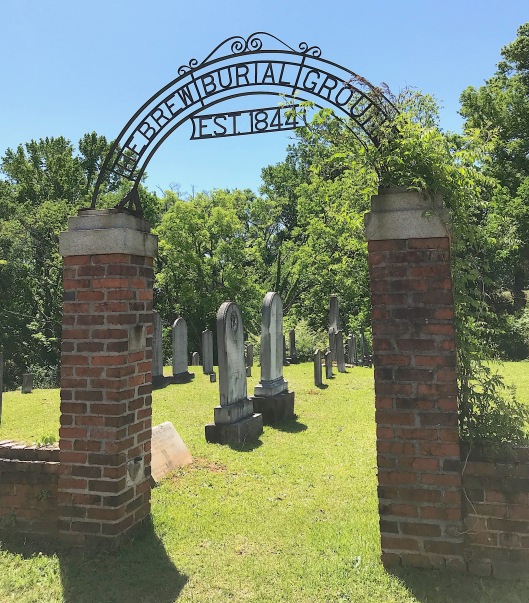 The Hebrew Burial Ground is located just across from Soldiers’ Square.

The first burial there was Leopold Bettman who died in August of that year in Perry, Ga. The second burial was his brother, David Bettman, who died in Hawkinsville, Ga. in October of the same year. In 1859, when Congregation Beth Israel was established, it took over the cemetery.

“She is Now Sweetly Sleeping”

Lena was born in 1875 in Bialystok, Poland, although it was part of Russia at that time. She emigrated to American and married Abraham Roobin. They settled in Cordele, Ga., and had one child together before Lena died of typhoid fever in September 1896. There’s some question as to the exact day. 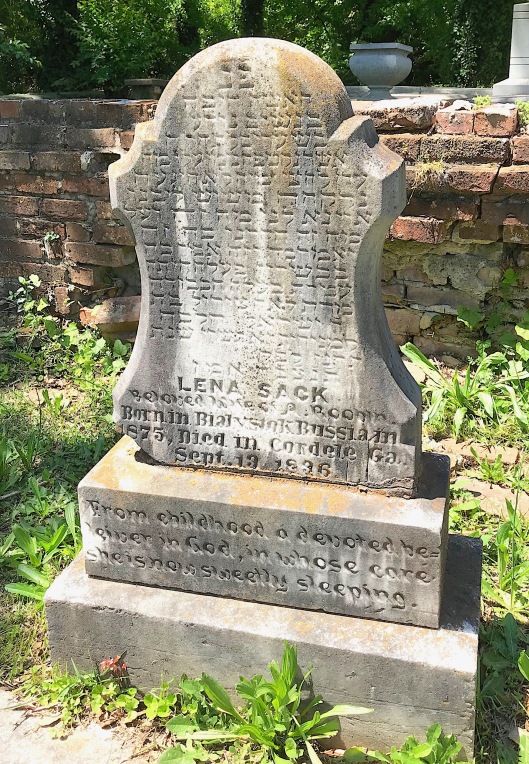 Lena Roobin married and had a child before dying at the age of 21. 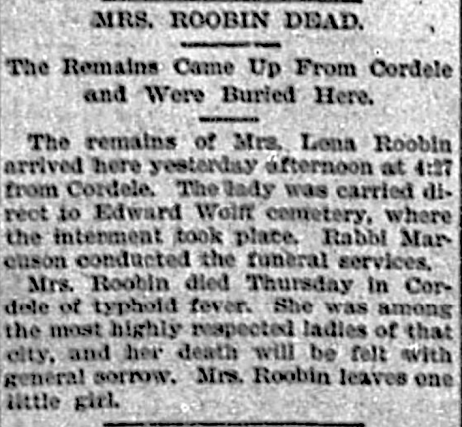 By 1879, a new Jewish cemetery had opened within Rose Hill called the William Wolff Cemetery. According to the Jewish Federation of Macon and Middle Georgia’s web site, the Hebrew Burial Ground was not generally used after that, though there are some graves there that date into the early 1900s.

Larger than the original Hebrew Burial Ground, William Wolff Cemetery was named after the benefactor who donated the land for it. A slice of the predominately black Oak Ridge Cemetery next door was sold to him in 1879 to use as a burial ground for Temple Beth Israel Synagogue. Wolff was a prominent dry goods merchant in Macon for many years. He and his brother, Edward, were German immigrants who came to Macon in the 1860s. Both became very successful businessmen over the years. 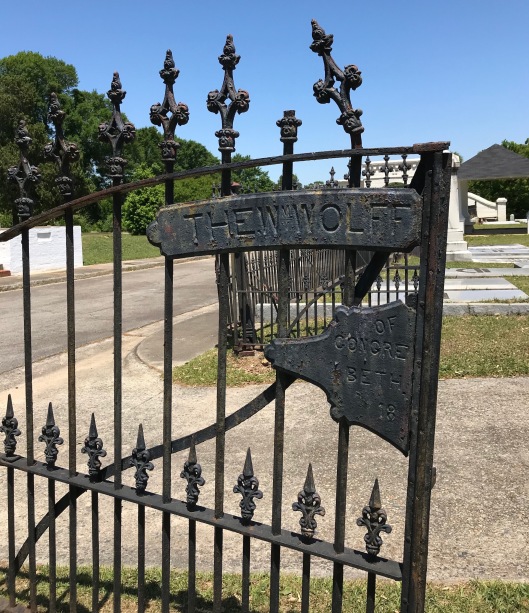 One side of the gates to William Wolff Cemetery within Rose Hill Cemetery.

There’s a story behind the monument to the wife of William Wolff, Bertha. She was born about 1852 to 1854 in Europe, and died Sept. 15, 1904. It only has her name on it with no dates. When I saw it, I knew at once who might have carved it but didn’t think to search it for a possible signature. Turns out it was on the back. 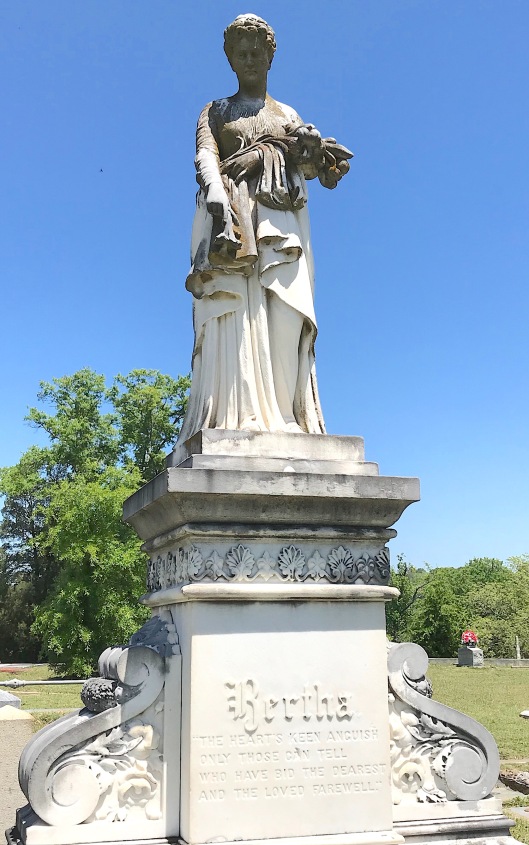 Bertha Wolff’s monument has no dates on it.

If you’ve been reading my blog for a while, this monument might look familiar to you as well. When I looked up her name on Stephanie Lincecum’s Rose Hill site, she confirmed that it was indeed done by sculptor John Walz. His best known work is probably the much loved (and photographed) monument of Gracie Watson in Savannah, Ga.’s Bonaventure Cemetery.

The woman holding calla lilies theme is one he favored a great deal. They usually represent marriage and fidelity. You can see similar figures Walz carved in the Davis plot at Laurel Grove South Cemetery in Savannah, the McMillan plot at Bonaventure Cemetery, and the Wolff’s in Macon. Only the heads are different, although the base of the Davis monument is markedly unique from the others. 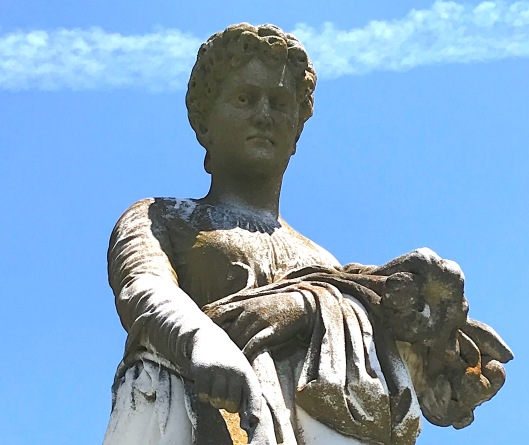 Was this the likeness of Bertha Wolff?

Walz made an effort to replicate face of the deceased on the face of the monument’s statue based on photographs he was given.

“The heart’s keen anguish only those can tell
Who have bid the dearest and the loved farewell.”

William died almost six years after Bertha on March 5, 1910 and was buried in the Wolff plot with her. His brother, Edward (a cotton broker and “linter”), died Aug. 25 of the same year after suffering a heart attack. He is interred in one of the few mausoleums in the Wolff Cemetery with his wife, Ricka, who died in 1936. 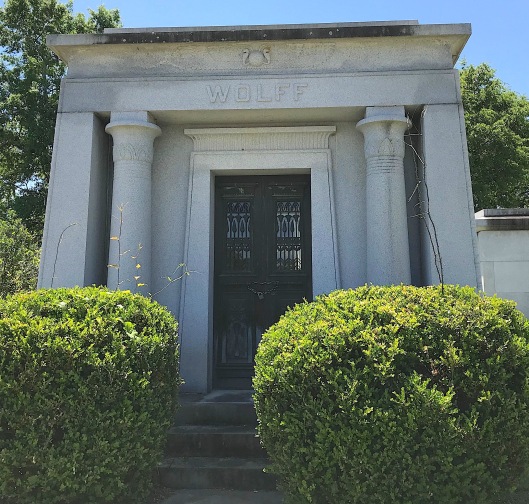 Edward Wolff, the brother of William Wolff, was a very successful cotton merchant and “linter” when he died a few months after his sibling in 1910. Note the winged disc with snakes above the door, often a symbol of the Masons. 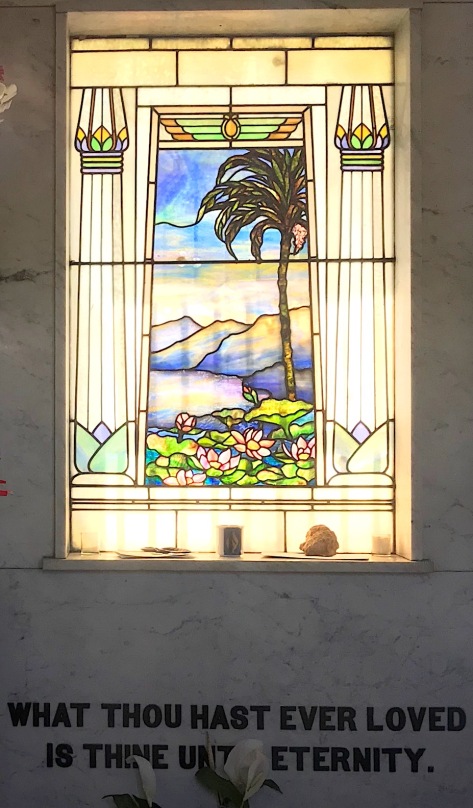 Fortunately, I was able to get a good photo of the stained glass inside the Wolff mausoleum.

The Hebrew Aid Society burial ground was started in 1899 by newly arriving Eastern Europeans. Congregation Sherah Israel, who opened their adjacent section in 1923, gradually took it over by removing the wall separating the two areas, dividing the lots among the owning families in 1929.

Small areas for Congregation B’nai Israel (1870), the Workman’s Circle (1920) and the new section of Sherah Israel that opened in 1987 are also within Rose Hill Cemetery. 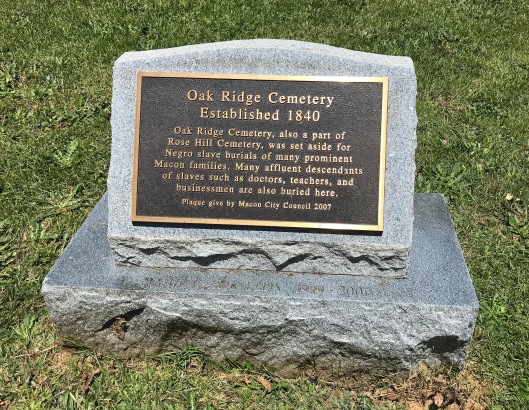 Most of the graves in Oak Ridge Cemetery are unmarked.

Of the 961 burials recorded between 1845 and 1865, only two names were recorded. “A free man of color named Hannibal Roe” was buried in 1846 and “Essex” because he was allegedly disinterred by local medical students in 1858. At least 1,000 formerly enslaved people are thought to be buried in unmarked graves at Oak Ridge. After the Civil War, many poor whites were also buried there.

One of the few markers I saw in the Oak Ridge area was for Julia Ann Brooks, the wife of John W. Brooks. She was born around 1824, Julia was a native of Richmond, Va. Julia and John are both listed as “mulatto” (an antiquated term thankfully no longer in use) or of mixed race. The 1880 U.S. Census lists John as being a retail grocer and their household included John’s sister, Mary Ann Brooks. It is interesting to note that Julia was at least 10 years older than her husband. 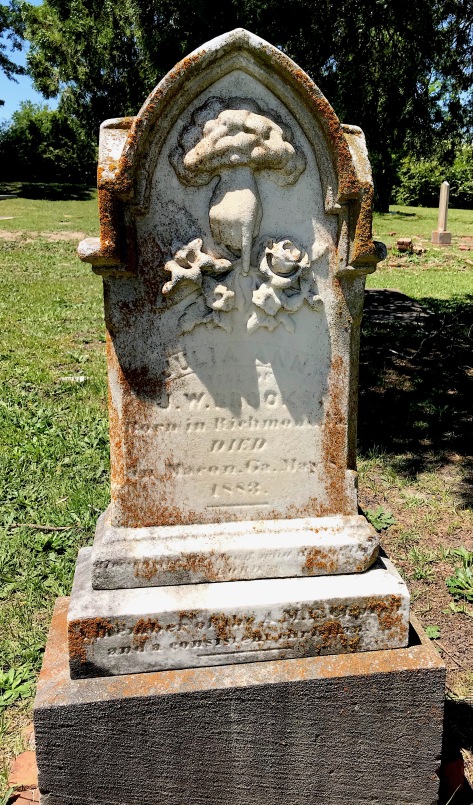 A hand with forefinger pointing down represents God reaching down for the soul.

Julia Ann died on May 8, 1883. She was probably around 60 years old. Her marker says she was a “member of the A.M.E. Church and a consistent Christian.” A finger pointing down from the clouds (often thought to represent God reaching down for the soul) clasps a few blooming flowers.

At the end of the afternoon, I was hot, sweaty but very happy. It’s often how I feel after I’ve spent a wonderful day visiting a historic cemetery like Rose Hill with such a variety of marker styles. It also left me wishing I could spend more time wandering the rows and discovering more of the stories.

Perhaps that’s what is so compelling about visiting cemeteries, knowing you may someday return and learn more about “the rest” that’s quietly waiting to be discovered. 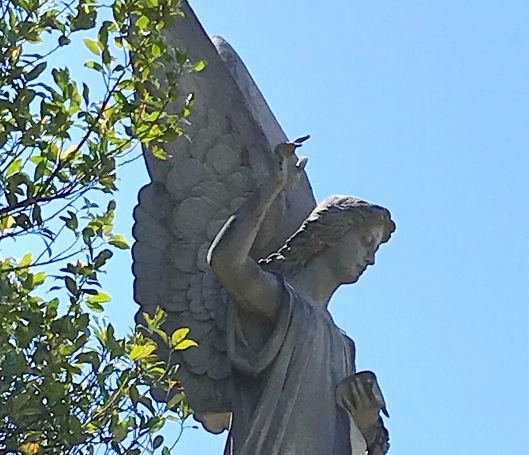