I’ve mentioned on more than one occasion that I got both of my degrees at the University of Georgia in Athens (journalism and English literature). When people hear this, they usually assume that I’ve been to Oconee Hill Cemetery.

Truth be told, until May 2018, I’d never been! That’s a little embarrassing to admit but back in the late 1980s to early 90s, cemeteries were the last thing on my mind. I was a full-time student at UGA and an intern at the Athens Daily News. But it was definitely near where I spent a great deal of my time in those days.

I moved into Payne Hall on the UGA campus my junior year in the fall of 1988. Built in 1940, there’s nothing distinguished about the building except that famed NFL Vikings football player Fran Tarkenton lived there when he played for the Georgia Bulldogs during the late 1950s. I can remember waking up on Saturday mornings to the sound of eager fans passing by my window on their way to Sanford Stadium. 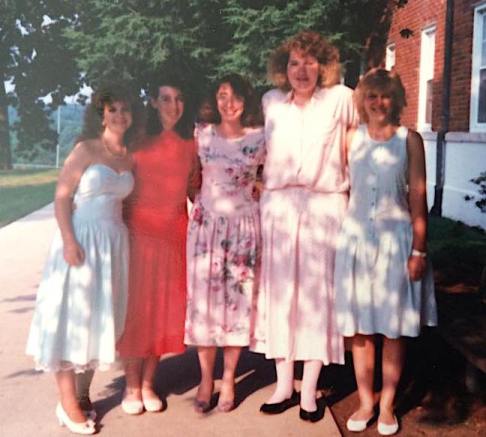 This blurry photo was taken outside Payne Hall (my room was on the first floor to the right) in May 1989 when we celebrated my 21st birthday. I am still in touch with three of these ladies today. That’s me on the far left with the big hair and green dress.

Sanford Stadium actually has a cemetery of its own. Georgia’s Uga mascots began coming onto the field in 1956. Sanford Stadium is the final resting place of each English Bulldog that’s served as the team’s mascot. The mausoleum includes an epitaph of their tenure. Moved twice since 1981, the mausoleum’s current location is near Gate 9.

When Mother’s Day rolled around last year, I asked if we could go to Athens and visit my old haunts. Getting inside Oconee Hill Cemetery was a “must do” on my list.

When I attended UGA, many people walked through Oconee Hill Cemetery to get from their apartments to the campus.

According to the cemetery web site, the first gravesites in Athens were located on unused portions of the college campus. That included the Jackson Street Cemetery, whose history you can read more about here. Because the burial ground had spread close to the homes of the president and the university’s professors, trustees urged the mayor and wardens of Athens to create a public cemetery for the community.

In 1855, 17 acres of land beside the Oconee River were purchased for $1,000 and Oconee Hill Cemetery was opened. Several graves at the cemetery predate the purchase. While most Southern cemeteries were segregated, Oconee Hill was noted for its policy of acceptance of all races, even during the 1800s.

Only a parking lot exists between Payne Hall and Sanford Stadium. Across the street from it is Oconee Hill Cemetery. To give you an idea of just how close they are, I took this picture. On autumn Saturdays, Athens comes alive with the roar of avid Bulldog fans but Oconee Hill’s residents remain silent year after year.

Only a railroad track and a street down below separate UGA’s Sanford Stadium and Oconee Hill Cemetery.

The first monument I photographed turned out to be a prominent figure in Georgia history and politics.

Born in 1815, Howell Cobb got his degree from the University of Georgia before apprenticing with a local attorney.

A native of Jefferson County, Howell Cobb was born in 1815. He was a University of Georgia graduate who apprenticed to become a lawyer. He married heiress Mary Ann Lamar in 1835 and they had 12 children, six of whom survived to adulthood. Thomas Willis Cobb, a member of the U.S.Congress and namesake of Georgia’s Cobb County, was a cousin.

As Cobb’s fortunes rose, so did his political ambitions. A Jacksonian Democrat, he was dedicated to a policy of moderation. He would eventually fill the roles of Congressman, Speaker of the House, Governor of Georgia from 1851-1853, U.S. Secretary of the Treasury under President James Buchanan and Civil War Confederate major general. 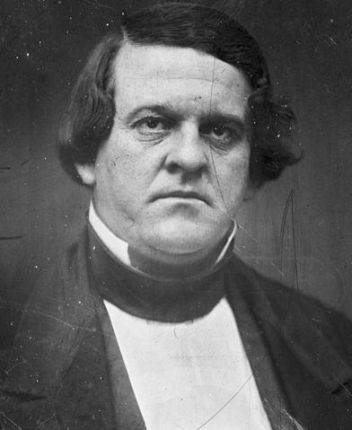 Abraham Lincoln’s election in 1860 shattered Cobb’s faith in compromise. He urged Georgia to secede from the Union and united with his brother Thomas Cobb and Governor Joseph E. Brown to spearhead the state’s secession movement.

Cobb served as president of the Provisional Confederate Congress and entered the Confederate Army as a colonel in the 16th Georgia Infantry after it adjourned. During the Antietam campaign, his brigade was destroyed while fighting at Crampton’s Gap.

In October 1862, he assumed command of the district of middle Florida. Promoted to major general, he took command of Georgia state troops in September 1863. He surrendered to Union forces in Macon on April 20, 1865. Cobb died of a heart attack while vacationing in New York on October 9, 1868.

The next family plot I glimpsed nearby was for the Baxters. That name rang a bell immediately. While Baxter Street (also called Baxter Hill) is not long, it is a main thoroughfare on the UGA campus that all students spend time traveling. It’s lined with dorms, restaurants, college bookstores, and bars.

The gate to the Baxter plot has a date of 1870 but the first person to be buried there died in 1844.

Sadly, much of the iron fencing around the Baxter plot has been piled up to the side and left to rust. The gate that says “1870” is still there but not much of the fence is still around the plot.

The obelisk has roots in Egyptian architecture and culture, representing a ray of sunlight. The draping provides the added cast of mourning, the death shroud, or the thin boudnary between Heaven and Earth.

The tall, draped obelisk with a draped urn on top is for Thomas Washington Baxter and his wife, Mary Wiley Baxter.

The son of Revolutionary War veteran, Thomas Baxter born in Greene County, Ga. in 1789, Thomas spent his early years in nearby Baldwin and Hancock Counties. Baxter gained a reputation for heroism during the Seminole Indian Wars. He married Mary Wiley in 1815 and they had 11 children together. Six of their sons would serve in the Confederacy during the Civil War.

When Cotton Was King

The Baxters moved to Athens around 1831, where Thomas accepted the presidency of the Athens Manufacturing Company. It became a key part of the thriving Athens textile industry. Baxter was also active in investing his growing fortunes and had his hand in banking enterprises as well.

Although Oconee Hill Cemetery did not open until 1856, Thomas W. Baxter died in 1844. He may have been buried elsewhere initially and moved.

Thomas died at the age of 54 on Aug. 18, 1844 of tuberculosis. That’s several years before Oconee Hill Cemetery officially opened. So I’m of the opinion he may have been initially buried elsewhere and moved later. Wife Mary died in 1869 at the age of 70.

To the right of Thomas and Mary’s obelisk is another for Major William Edgeworth Bird, their son-in-law. He married their daughter Sarah (“Sallie”) in 1848. Major Bird died in 1867 at their Hancock County, Ga. home, Granite Farms, in 1867. He was wounded at the Second Battle of Manassas in Virginia during the Civil War.

Beside Major Bird’s grave is that of his daughter and Thomas’ granddaughter, Mary Pamela Bird. She was their third and youngest child, born in 1853. 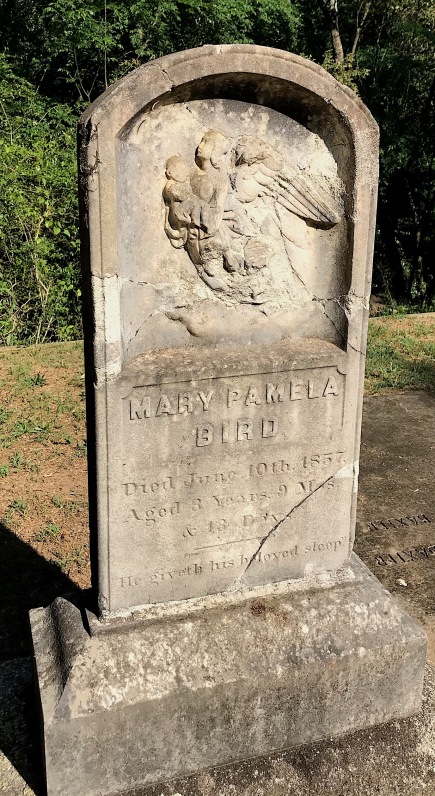 Mary Pamela had not yet reached her fourth birthday when she died in 1857.

Major Bird’s wife and Mary Pamela’s mother, Sallie Baxter, is not buried in the Baxter plot. Sometime in the 1890s, she moved to Baltimore, Md. to live with her eldest daughter, Saida Baxter Smith, and her family. Sarah died in 1910 and is buried next to her son, Wilson Bird, in Baltimore’s Green Mount Cemetery.

Across the way is the Childs family plot, which is dominated by a large monument featuring a woman holding a rope-encircled anchor.

The anchor is a common symbol found on graves. Its meaning has several origins, the most obvious of which is Hebrews 6: 19: “Which hope we have as an anchor of the soul, both sure and steadfast.”

Born on Dec. 9, 1820 in Springfield, Mass., Asaph King Childs learned the silversmith craft from his older brother, Otis. Asaph and Otis moved to Milledgeville, Ga. and they worked together from 1835 to 1846. After moving to Athens, they opened the Athens Hardware Company. Asaph also helped found the National Bank of Athens. Otis eventually returned to Massachusetts sometime around 1861.

From the June 14, 1872 edition of the Southern Banner. Susie was actually three when she passed away.

Susie’s marker fascinates me. It looks like an indentation was left for her death date but that ended up being carved below it. Instead the words “fell asleep” are inscribed there.

While those words may seem strange to see on a grave marker now, they were not unusual at the time. “Asleep in Jesus” is another such phrase. I consider them to be predecessors for the more modern “rest in peace.” Many believed that death was merely a momentary “sleep” from which the dead would rise when Christ returned. I think it was also a way, especially for those mourning the death of a little one, to believe that they were just sleeping and not gone forever.

Flower-encircled cross on the grave marker of Edward R. Hodgson.