After finishing up at St. John’s Lutheran Churchyard, Frank and I walked the short distance to St. Michael’s Church. It’s located in Charleston amid what’s known as the “Four Corners of Law.”  The term covers the presence of institutions representing federal, state, local, and ecclesiastical law on each corner of the intersection. I remember hearing about this as a child when my family toured Charleston in a horse-drawn carriage like the one pictured below.

The Four Corners of Law

St. Michael’s Church stands on the southeast corner of the intersection. On the northeast corner is Charleston City Hall, constructed between 1800 and 1804. On the northwest corner stands the Charleston County Courthouse. Originally built in 1753 as South Carolina’s provincial capital, the building was rebuilt in 1792 for use as a courthouse. On the southwest corner is the U.S. Post Office and Federal Courthouse, built in 1896.

Standing in front of St. Michael’s to take a photo can get you mowed down by a car so I borrowed this one from St. Michael’s website.

St. Michael’s is also the oldest surviving religious structure in Charleston. It was built between 1751 and 1761 on the site of the original wooden church built in 1681 by St. Philip’s Church, which was damaged in a hurricane in 1710. A new St. Philip’s Church was built several blocks away on Church Street. In 1727, what was left of the old wooden church was demolished.

While nobody knows exactly who designed St. Michael’s, some credit the influence of St. Martin-in-the-Fields, London, designed in the 1720s by James Gibbs. Samuel Cardy was the builder. The church’s walls are made of stuccoed-over brick painted white. The two-story portico facing Broad Street was the first of its size in colonial America and features Tuscan columns.

I didn’t have a chance to go inside St. Michael’s but this photo from Wikipedia shows it’s as lovely as the outside. 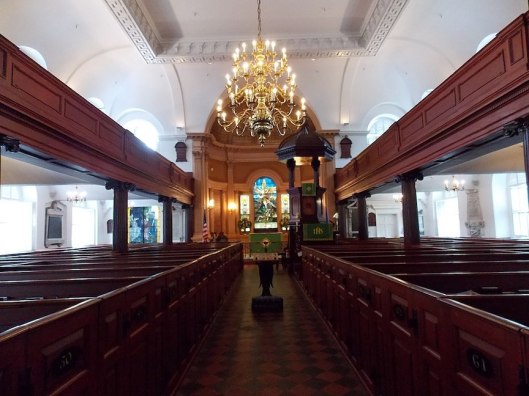 St. Michael’s was originally affiliated with the Church of England. Following the American Revolution, the church came under the jurisdiction of what is now the Episcopal Church of the United States. Currently, it’s a parish church of the Anglican Diocese of South Carolina. In June 2017 the diocese, and by extension St. Michael’s, were received into the Anglican Church of North America. The parish continues to worship according to Anglican rites and traditions.

Frank does a good job in his book of explaining how St. Michael’s was in the thick of it during both the American Revolution and the Civil War. Used as an observation tower during the American Revolution, St. Michael’s 186-foot high steeple was painted black to decrease its visibility. The British stole the church’s bells in 1782. Union shells hit St. Michael’s during the Civil War, ruining the chancel. You can still see evidence of the bombardment at the bottom of the pulpit.

An 1885 hurricane tore the top of St. Michael’s steeple off and swept away much of the slate roof. This is a view of the back of the church and part of the churchyard.

On Find a Grave, the churchyard at St. Michael’s has a list of almost 900 graves. If you visit, you’ll notice it is quite crowded. Some of the graves were built upon by the church over the years.

This photo gives you an idea of how crowded St. Michael’s Churchyard is.

St. Michael’s has the distinction of being the final resting place of two signers of the U.S. Constitution, John Rutledge and Charles Cotesworth Pinckney. Lamentably, I only photographed one of their graves. There’s a nice plaque summing up both their roles on the wall. As it turns out, the two men were connected by more than their role as signers.

A plaque details the lives of Charles Pinckney and John Rutledge.

A native of Charleston, John Rutledge practiced law in the early 1760s. Ten years later, he served as a delegate to the First and Second Continental Congresses. Also present was his younger brother, Edward Rutledge, who served as a delegate. Edward shared his law practice with Charles Pinckney, whom I’ll talk about later. In fact, Edward was 26 when he signed the Declaration of Independence in 1776, making him the youngest delegate to sign.

John Rutledge was in the forefront of efforts to defend his state against the British by pushing for the construction of Fort Moultrie on Sullivan’s Island. He also assisted in drafting the U.S. Constitution, serving on several committees. From 1779 to 1782, he served as Governor of South Carolina. 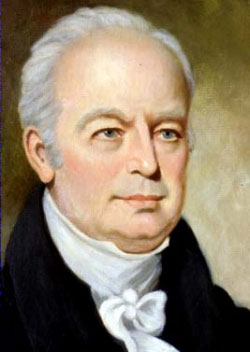 John Rutledge was the first Supreme Court nomination to be rejected by the Senate, and he remains the only “recess appointed” justice not to be subsequently confirmed by the Senate. (Photo source: Wikipedia)

In 1789, President George Washington appointed Rutledge as one of the inaugural Associate Justices of the Supreme Court. Rutledge left in 1791 to be Chief Justice of the South Carolina Court of Common Pleas and Sessions. Following John Jay’s resignation in 1795, Rutledge returned to the Supreme Court as Chief Justice. Because the vacancy came during a Senate recess, Washington named Rutledge as the new chief justice by a recess appointment.

Chief Justice of the Supreme Court

When the Senate reconvened in December 1795, it rejected Rutledge’s nomination. Rutledge resigned soon after and withdrew from public life. He holds the record for the shortest tenure of any Chief Justice.

When Edward Rutledge, now Governor of South Carolina, heard about the death of his friend President George Washington, he became so upset that he had a stroke. Edward died  on January 23, 1800 at the age of 50 and is buried at St. Philip’s Episcopal Church Cemetery just a few blocks away from St. Michael’s. John Rutledge died about seven months later in July 1800 at the age of 61. 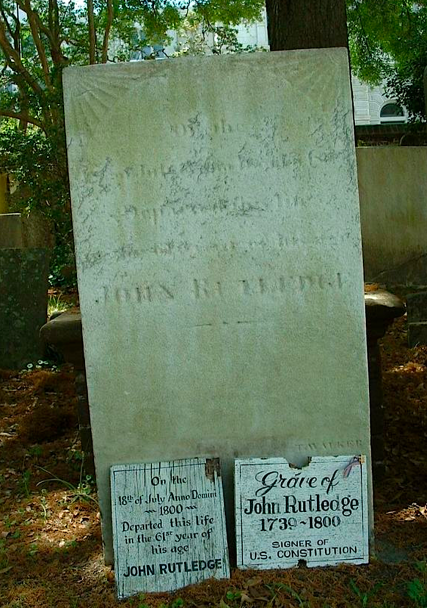 The grave of John Rutledge is worn by time and the elements. (Photo source: Philip Greendyk, Find a Grave)

Fortunately, I did get a photograph of the other Constitution signer Charles Pinckney. Of the two men, he’s probably the more colorful and caused more tongues to wag. Pinckney’s grave has a plaque above it with a long list of his accomplishments that cuts to the chase of what his great career encompassed.

As you can see, Charles Pinckney’s resume is very impressive.

Born into a powerful family of aristocratic planters in 1746, Pinckney practiced law with Edward Rutledge for several years before he was elected to the colonial legislature. Pinckney served in the American Revolutionary War. In Charleston, he was captured as a prisoner of war (as was his law partner, Edward Rutledge). Two years later, both were set free and Pinckney was brevetted to brigadier general.

After the war, Pinckney won election to the South Carolina legislature. An advocate of a stronger federal government, Pinckney served as a delegate to the 1787 Philadelphia Convention, which wrote a new federal constitution.

Pinckney and the XYZ Affair

After turning down George Washington’s first offer to serve in his administration, in 1796 Pinckney accepted the position of Minister to France. In what became known as the XYZ Affair, the French demanded a bribe before they would agree to meet with the U.S. delegation and Pinckney firmly declined. He returned to America, accepting an appointment as a general during the Quasi-War with France.

The Federalists chose Pinckney as their vice presidential nominee in the 1800 election, hoping to win support  in the South. While Alexander Hamilton worked to elect Pinckney president under the electoral rules then in place, both Pinckney and incumbent Federalist President John Adams were defeated by the Democratic-Republican candidates.

The Federalists chose Pinckney as their presidential nominee for the 1804 election but Thomas Jefferson won in a landslide. The Federalists nominated Pinckney again in 1808, but Democratic-Republican nominee James Madison prevailed.

After the 1808 election, Pinckney focused on managing his plantations and developing his legal practice. He died at the age of 79 on August 16, 1825. Interestingly, the final resting places of his two wives is unknown.

Next to Charles Pinckney (on the ground) is the grave of Frederick Rutledge, the son of fellow U.S. Constitution signer John Rutledge. 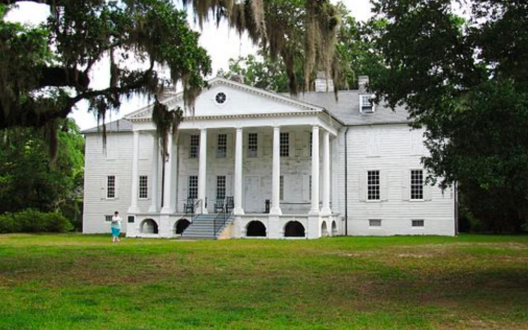 Hampton was once a bustling rice plantation that now belongs to the State of South Carolina as a museum. (Photo source: Brian Stansberry, Wikipedia)

Designed in the Georgian style, the construction of the home at Hampton Plantation was evolved over time starting in 1735 and ending around roughly 1791. The original core was built in 1735 by Noe Serre, a French Huguenot refugee, and was a central-hall two-story structure. The property was acquired in 1757 by Daniel Horry, Harriot Pinckney Horry Rutledge’s father, and he made additions to it.

While visiting Hampton Plantation in 1791, President George Washington was asked whether a certain oak tree should be cut down to create a better view from the portico. He replied that he liked the tree, and it was saved. From then on the tree was known as the Washington Oak.

Frederick Rutledge and Harriot made Hampton Plantation their home in 1797. They had eight children together. On April 12, 1824, in an odd repeat of his father’s death, Frederick had a stroke while crossing the Cooper River from Charleston to Haddrell’s Point. He fell backward into the river and drowned.

There are more stories to come from St. Michael’s Churchyard. Stay tuned.