I’m still at St. Michael’s Churchyard in Charleston, S.C. with just a few more graves I wanted to share. This first one is the only one of its kind that I’ve ever seen. I’d never even heard of wooden headboard grave markers until Frank Karpiel showed me the one at St. Michael’s.

Before I get started, you should know that what exists now at St. Michael’s is a replica. The original headboard managed to survive hurricanes, an earthquake, and several fires until it was removed in 2005 to keep it preserved. You can see it up close at the Charleston Museum. 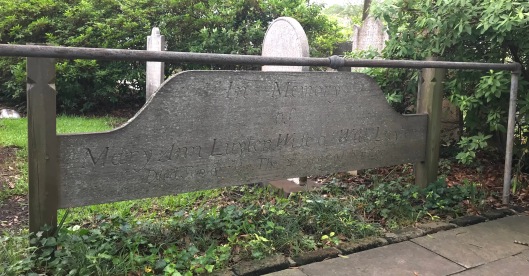 This wooden headboard is a replica of the one that William Luyten made for his bride, Mary Ann.

The story behind this headboard has been printed in various newspapers over the years with some variations. It was even featured by Ripley’s Believe it Or Not! in some editions because it survived so many years.

Young Mary Ann was 18 when she became engaged to a young Charleston cabinet maker from England named William Luyten. But only three days before the wedding, she was thrown from her horse and became paralyzed.

Mary Ann wanted to release William from of their engagement. But William “insisted that they be married, though there was no possibility that his bride would ever be able to rise from her bed.” He built her a wooden bedframe where she is said to have laid the entirety of their nine-year marriage. One version of the story even said she lost all of her beauty and her hair turned white.

Before her death at the age of 27 on Sept. 9, 1770, nine years later, Mary Ann asked that the bedframe be used to mark her grave at St. Michael’s Churchyard.

Mary Ann was not the only one with such a marker. While thought to be common at one time, there are few still in existence. I found these online at Midway Church’s Colonial Cemetery in Liberty County, Ga. Like the wooden crosses people sometimes place on graves, these also decayed over time and fell apart.

Frank also pointed out the slate marker of Robert Stedman (1723-1766), which is in wonderful condition for its age. A winged soul effigy with long hair decorates the top.

“He Was Much Respected”

Robert and his brother, John, along with their families, traveled to Charleston from England sometime around 1760. Robert and John both grew indigo on land they’d obtained near the Santee River. The brothers also opened a Charleston barbershop where they created perukes (wigs of shoulder-length hair), popular for men of that era.

The name of Robert’s wife is unknown and she probably died before he left for Charleston with their children. He supposedly remarried to a the sister of a friend, John Boomer, who administered Robert’s estate after he died on Sept. 9, 1766 in his early 40s. 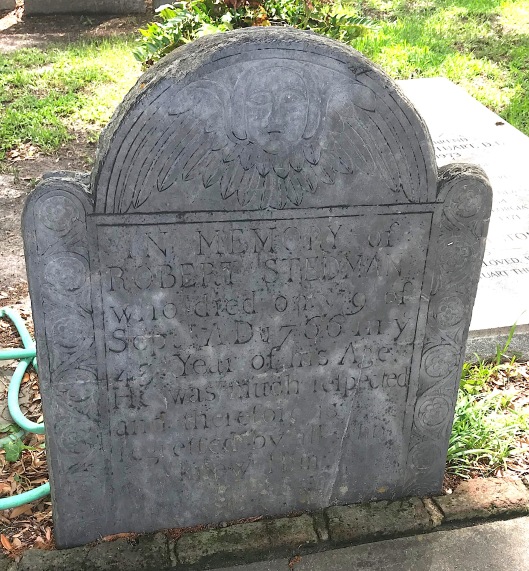 Robert Stedman and his brother, John, owned a barbershop in Charleston.

The next two markers are ones I particularly liked the look of more than anything else. I knew nothing about the Petigru family. But what I would find as I dug into their past was often sad and disturbing. It’s a cautionary tale in that while a man may go down in the history books for how his actions shaped a state’s future, the resulting cost of what his family endures in the process is a steep price to pay.

The first marker is for Daniel Elliot Huger Petigru (1822-1863). His beautifully carved marker does not reveal the strife that rippled through his family’s life.

Daniel’s father, James Petigru, is much better known than his son. James was a lawyer, politician, and jurist best known for his service as the Attorney General of South Carolina. His juridical work played a key role in the recodification of the state’s law code. He was also known for opposing nullification and, in 1860, state secession.  Petigru made it clear that he was against South Carolina’s leaving the union and thought it would bring ruin to the state.

Daniel Petigu’s father James, labeled a “Unionist”, was well known in Charleston for his opposition to secession.

Born in 1822, Daniel was one of James and Jane Amelia Postell Petigru’s three surviving children. According to “Life, Letters and Speeches of James Louis Petigru: The Union Man of South Carolina” by James Petigru Carson, Daniel is described as being his mother’s favorite despite his unruly behavior.

Life in the Petrigu home often difficult. James was gone much of the time and their oldest child, Albert, died from a fall off a third-floor banister at the age of eight. Jane was mentally fragile and developed an addiction to morphine. She was often ill, sometimes truly so while other episodes were feigned to gain attention. These circumstances affected James and the children.

Daniel was sent away to boarding school in Maryland, and suspended while at Princeton. He was admitted to the bar in Charleston but did little with that training. He joined the Third Regiment Dragoons of the U.S. Army and accompanied them to Mexico in October 1847. He made captain and was put in charge of a company but was later placed under arrest. Further brushes with trouble might have gotten him kicked out had the Regiment not disbanded the following year.

Discord in the Family

After losing a job in Savannah that his father had procured for him, Daniel worked in James’ law office off and on, living at home. Father and son did not get along well.

I found a sad letter written by James to his daughter, Caroline, about the death of Daniel. She was likely living in New York. While Daniel was often at home, he rented a room over a bookstore. It was there that he was found dead on the morning of Jan. 5, 1863 at the age of 42. He was buried at few days later at St. Michael’s Churchyard.

A hand descends from Heaven’s clouds to pluck an Easter lily, which is a symbol of resurrection and hope.

Despite their rocky relationship, James was deeply affected by his son’s death. He tried to look beyond the bad parts of Daniel’s character for anything that could be deemed admirable.

Now he is gone my mind loves to dwell on the circumstances that are favorable to his memory: and there are none more honorable than this, that he contracted no debts. At least I know of none, and his name is unsullied by any dishonesty or baseness.

James Petigru, already in poor health himself and struggling financially, died a few months later on March 9, 1863. I did not get a photo of his marker, but he is buried near James, his daughter, Sue, and wife, Jane.

Life of an Authoress

When I first saw the marker next to Daniel’s, I was intrigued because it features an open book with a quill lying across it. This was the grave of Daniel’s youngest sister, Susan “Sue” Petrigru King Bowen.

Sue was born on Oct. 23, 1824 and struggled with her mother’s mood swings and “illnesses.” When she went away to school, she soaked in all that was available to her from her academic classes to the glittering societal circles the glimpsed. Sue was not a wallflower and spoke her mind so her father despaired that she might attain a good matrimonial match.

A photo of Susan Petigru King Bowen in later years. (Photo source: South Carolina Historical Society – scanned from “A Family of Women: The Carolina Petigrus in Peace and War” by Jane and William Pease, University of North Carolina Press, 1999.)

But the King marriage was rocky. Henry and Sue had one child, Adele, in 1844. Sue was not happy with their lack of financial success as Henry was not ambitious. She often visited sister Caroline in New York. But Caroline’s husband was an alcoholic and she, too, was unhappy in her marriage. She would eventually separate from him in 1850 and enjoy life on the society circuit, pursuing painting.

Sue had dabbled in writing from girlhood. Her novels, which included Busy Moments of an Idle Woman (1853), Lily: A Novel (1855), Sylvia’s World: Crimes Which the Law Does Not Reach (1859), and Gerald Gray’s Wife (1864), focused on subversive portrayals of South Carolina aristocracy, in which men toyed with women’s affections, women plotted against one another’s best interests, and mothers forced daughters to choose wealth over romance. Her own life was rich fodder for such books.

Henry King died at the outbreak of the Civil War when fighting in the Confederate army, shot in the stomach during the Battle of Secessionville in 1862. Sue barely paused to mourn his death. Yet Sue kept on, affecting flamboyant behavior and setting tongues wagging in society circles.

In 1871, Sue shocked Charleston society and her family when she married Christopher Columbus “C.C.” Bowen. During the Civil War, Bowen enlisted in the Confederate Army and served in the Coast Guard. Upon the readmission of South Carolina to representation, Bowen was elected as a Republican to the 40th and 41st Congresses and served from July 1868 to March 1871. He was then a member of the S.C. House of Representatives during 1871 to 1872.

But Bowen’s past included a court martial for forgery from the Confederate Army and rumors swirled about other questionable behavior. He received a two-year prison sentence and a $250 fine for bigamy, but Sue appealed to President Ulysses S. Grant, who eventually offered Bowen a full pardon. C.C. was elected sheriff of Charleston County, a position he held through Sue’s death. 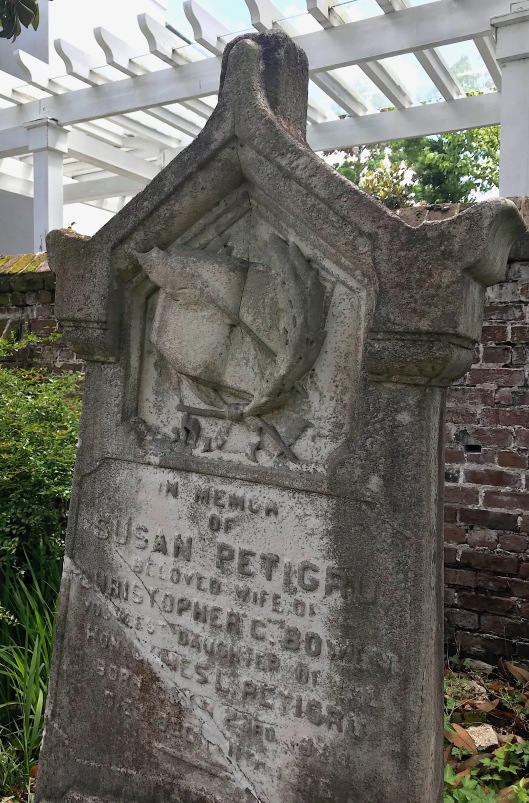 In her last years, Sue lived in social isolation, having burned her bridges with her family due to her marriage and behavior. When Sue died of pneumonia in December 1875, her legal will mysteriously disappeared along with her jewelry.

C.C. married within a year of Sue’s death to a young woman 30 years his junior. He died in 1880 at the age of 48 and is buried in Magnolia Cemetery in North Charleston.

Sue and Daniel’s mother, Jane, died in 1868. She is buried at St. Michael’s Churchyard with husband, Daniel, and Sue. Caroline lived her last years in Rome, Italy pursuing her painting and enjoying the society life there. She died in August 1892 and is buried at the Protestant Cemetery (Acattalico) in Rome.

Next time, I’ll be at another Charleston, S.C. churchyard at the First Scots Presbyterian Church.

The Sass family plot at St. Michael’s Churchyard. Jacob Sass (1813-1865) served as president of the Bank of Charleston during his career.