This post starts my eighth year of writing Adventures in Cemetery Hopping. When I wrote my first post in January 2013, my son was in kindergarten and I was just starting to get some time to pursue my family tree research. Now he’s in middle school and I’m still plugging along on this blog with little end in sight. And many of you have been along for the ride ever since.

There are simply too many awesome cemeteries to put the brakes on now. So I hope you’ll stay with me for the rest of the journey.

It seems fitting that this week I’m kicking off a new series on Bethel United Methodist Church’s (UMC) burial ground in Charleston, S.C. I’m referring to it as a burial ground rather than a churchyard because as you will find, it contains the remains of more than Bethel UMC’s congregants. My first visit and only visit to Bethel UMC was in September 2013, the first year of my blog and on a 10th anniversary trip I took with my husband to Charleston.

A photo my husband took of Bethel UMC’s burial ground in September 2013.

This visit is not part of my cemetery tour day in May 2018 with Frank Karpiel that I’ve discussed in the last several blog posts. I realized I had a quite a few photos from that 2013 visit and I’d not yet written about it. So why not now?

Bethel UMC’s origins are from 1797, when it met in a small wooden structure on the corner of Calhoun and Pitt Streets. Members were both black and white, with a specific order of whom sat where. Whites sat downstairs in the front rows, free persons of color occupied the seats in the back and slaves were allowed to sit in the upstairs gallery.

According to Bethel UMC’s web site, the original wooden building was moved westward on the lot facing Calhoun Street in 1852 to allow for construction of a new and larger structure. The early building, now known as Old Bethel UMC, was donated to the black congregation in 1876. In 1882, with the agreement of both white and black congregations, it was moved across the street to its present location, 222 Calhoun Street. It continues to serve as Charleston’s oldest standing Methodist church building.

A wonderful thing happened while I was putting together this post. I had posted a photo on this blog’s Facebook page of a grave from Bethel UMC’s burial ground of a child who died at the age of three months in 1859. A gentleman by the name of Grant Mishoe, who is connected with the Gullah Society, contacted me via Facebook with information about her. I began to learn about the complicated past that is the history of Bethel UMC’s burial ground.

Bethel UMC does not deny this past and acknowledged it by placing a marker in 2012 to confirm that many burials took place here that were not marked or whose markers no longer exist, were moved or even paved over in some cases. 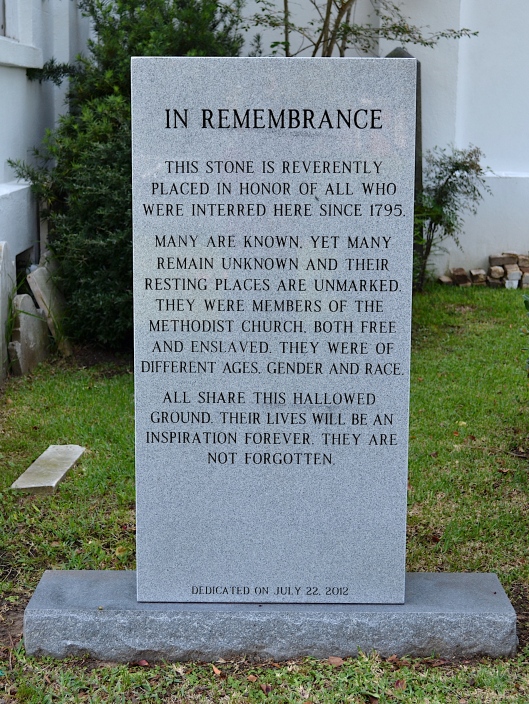 This marker indicates that there are indeed a number of unknown burials in this burial ground, under the church and the parking lots around it.

I could painstakingly go over the history of what parts of the old cemetery were paved over, what congregation they belonged to, and so on. Grant did a great job sharing his maps with me and it goes beyond Bethel to other black congregations (namely Trinity Colored Church Burial Ground and Eprath Burial Ground) that existed at the time. In addition, part of the Bethel’s churchyard was built over during the construction of the 1852 building. I’m sharing this map from Grant to give you an idea of just how complex these burials are.

This map, courtesy of Grant Mishoe of the Gullah Society, gives you an idea of how many different congregations had burial grounds next to Bethel UMC’s.

After construction of the 1852 building, Old Bethel UMC purchased land for a cemetery on Cunnington Avenue several miles north of Charleston in the area I wrote about in 2016 known as the Magnolia Umbra Cemetery District and contains 23 different cemeteries (some very small). What became known as “Colored Bethel” cemetery is wedged between Lewis Christian Union Cemetery and Friendly Union Society Cemetery.

Who Was Engenia Robia?

While there are some grand monuments in the Bethel UMC burial ground that I’ll show you in this series, there’s also a curious mishmash of pieces of grave markers that resemble puzzle pieces on the ground surrounding the current church. Others, intact, are leaning against the building. Some are clearly old from the early 1800s and some are from later on. This is not a situation unique to Bethel UMC. I’ve seen it at just about every churchyard in the historic district of Charleston. 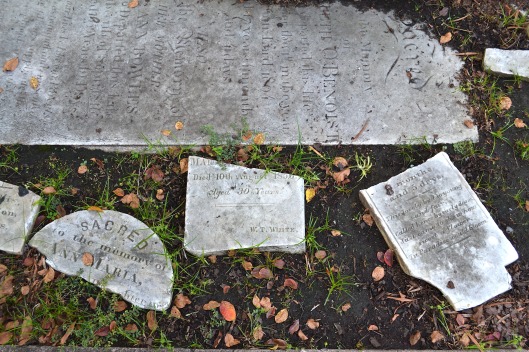 It’s not unusual to see pieces of old grave markers scattered about at Charleston churchyards and cemeteries. One fragment in this picture was from a marker carved by noted Charleston stone mason W.T. White.

One of these was an almost totally intact marker I referred to earlier for a child named Engenia Robia. She was born on March 21, 1859 and died on June 23, 1859, barely three months old.

Engenia Robia was only three months old when she died in 1859. Grant Mishoe has a copy of a death record for her that indicates she was likely the child of a white father and a mixed race or black mother.

Engenia Robia’s past has been obscured by time and circumstances but thanks to Grant, I was able to uncover some possibilities. The Robias were likely descended from slaves who worked for the white Robiay (spelling is uncertain) family, who were originally French Huguenots. Engenia was probably the child of a white father and a mixed raced or black mother, free of slave. There are no known Robias that were white. The Robiays moved to New Orleans, La. after the Civil War.

Were Engenia’s parents members of Bethel UMC or was Engenia’s mother a member of Trinity, who also buried members in Bethel’s burial ground at that time? We don’t know for sure. 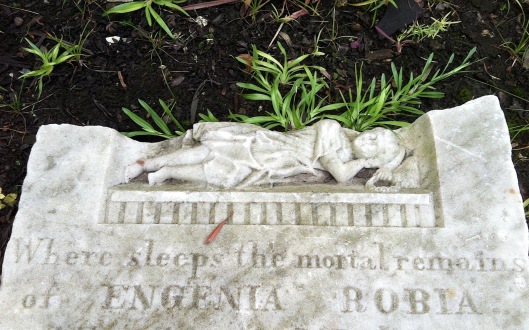 Engenia Robia’s life was very short but she clearly had an impact on those who loved her. Here she appears to be sleeping.

This grave marker carved so exquisitely must have been expensive. The epitaph comes from the first half of a song “Forgive Bless’d Shade” by John Wall Callcott. Published around 1775, it was a popular English song put on gravestones.

Forgive, blest shade, the tributary tear,
That mourns thy exit from a world like this;
Forgive the wish that would have kept thee here,
And stayed thy progress to the realms of bliss.

Died in the Pulpit

I could find little information about Elizabeth Martha Simons Vinmo Moore beyond the fact she was born around 1796 and died on Oct. 26, 1861, possibly 60 years old. Her marker’s epitaph is quite worn but the carving at the top (although the rainwater didn’t help) stands out. I found more information concerning the death of her husband.

Elizabeth Vinmo Moore was the wife of the Rev. George Washington Moore.

Elizabeth was married to the Rev. George Washington Moore, who began serving as a pastor (according to his death notice) in 1820. They had an estimated 11 children together, a few dying in childhood.

An angel bearing a wreath beside an urn tops the grave marker of Elizabeth Moore.

On Aug. 13, 1863, the Rev. Moore died while attending a camp meeting near the Anderson Country Court House. A Charleston Courier article from Aug. 24, 1863 describes his death as follows:

The opening hymn has been sung, and with more than usually fervid power, he had invoked the divine blessing upon the assembled congregation, especially for the widows and orphans of the country. The last word was uttered, the “amen” impressively died upon his lips, and then as if God himself had thus pronounced His approval of a well spent life, the holy man fell forward, and in ten minutes more, was numbered among the sainted dead. He appeared to suffer but little, and did not speak again.

This article also noted that his remains were brought back to Charleston for burial. While his wife’s beautiful marker has survived, the one for the Rev. Moore did not.

“Happy Soul They Days Are Ended”

The last stone I’d like to feature today is for a young woman who was six days away from her 17th birthday and already a wife. That’s difficult for me to wrap my mind around that.

Ann Eliza Prince Calder was only six days from her 17th birthday when she died on May 19, 1859.

Ann Eliza Prince was born on May 25, 1842 to bricklayer Edwin Prince and his wife, Sarah. We don’t know when she married Edwin Eason Calder. But they had one child, Annie, shortly before Anna’s death on May 25, 1859. Edwin and little Annie went to live with his in-laws, the Princes.

A flower with a broken stem indicates a life cut short.

Sarah lived with her parents, and little Annie, along with her other children. The last record of her is that she was boarding at a residence at 231 Meeting Street. Son James was working as a carpet layer and his sister, Caroline, was living with him.

What Happened to Annie?

Annie was lived with her step-mother until she married mechanic John Reynolds McCarrell on April 7, 1879. They had two children, John Jr. and Alice. John died in in 1887 and Annie remarried to John P. Bee, with whom she had a son, John P. Bee Jr. John P. Bee, Sr. may have died in 1918. Annie vanishes after appearing on the 1920 U.S. Census living with daughter, Alice, and her family.

There’s much more to discover at Bethel UMC Burial Ground in Part II.