Did you know it was five months ago when I started writing this series about the historic district churchyards  of Charleston, S.C.?

Most of the information I gathered and photos I took were from a single day in May 2018 when author/educator Frank Karpiel kindly showed me around some of his favorite haunts. A few I’d been to before and a small number of my photos are from those previous visits. My visit to Bethel United Methodist Church took place in 2013 but I felt it was worth including.

Today, I’m finishing the adventure by wrapping things up at the Circular Congregational Church (CCC) burial ground with a final look around at this unique collection of grave markers and monuments. 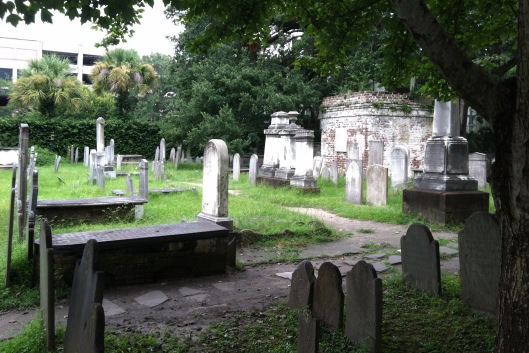 A view of the Circular Congregational Church burial ground. That’s the Huston-Peronneau brick vault to the right.

The largest grave site in the CCC burial ground is the Hutson-Peronneau brick vault, measuring 10X10X10. An archeological survey done in the early 1980s revealed that at least 18 persons were interred inside of it, many that are listed in church records. 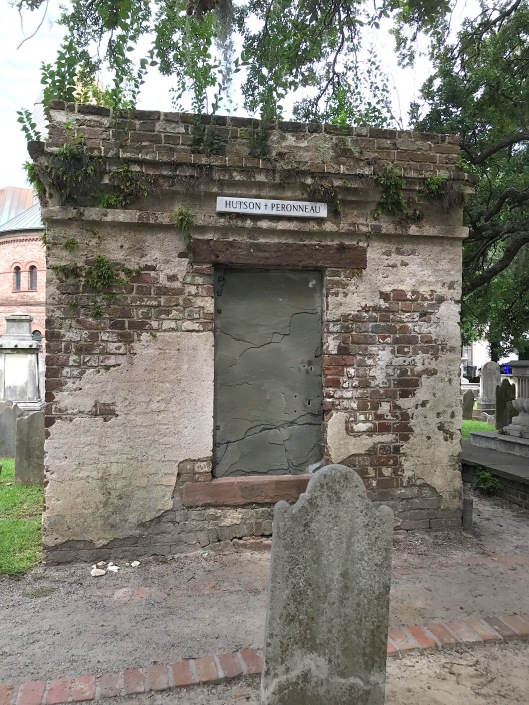 Some of the markers I shared last week belonged to the Peronneau family. Arthur Peronneau (1735-1774) may have been the first person placed inside of this vault. I could not find much information about him. He married Mary Hutson at St. Philip’s (whose West Cemetery is right next door) in June 1762.

Arthur died on Oct. 15, 1774 at the age of 39. His will mentions his wife, Mary, and the four oldest children, all of whom lived to adulthood. It does not mention his youngest daughter, Ann. Sadly, she was born nine days after Arthur died on Oct. 24, 1774.

The most famous person interred in the Hutson-Peronneau vault is Arthur’s brother-in-law, Richard Hutson (1747-1795). A plaque detailing his storied career was placed on the vault by his family’s descendants in 1995. 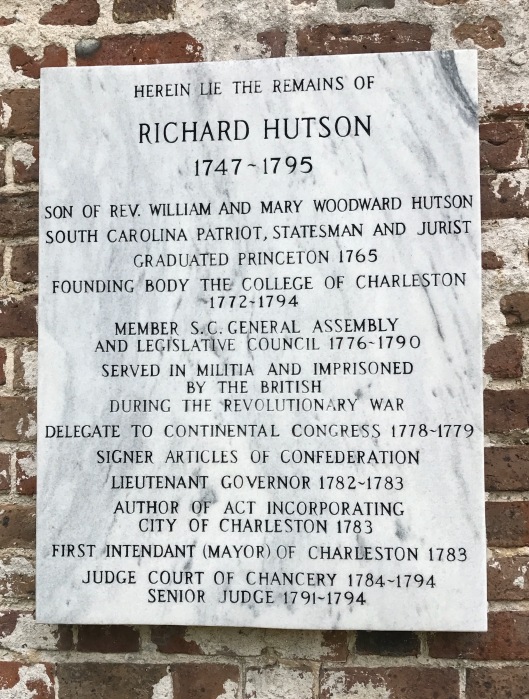 Richard Hutson graduated from Princeton University in 1765. He studied law afterward and gained admittance to the South Carolina bar in 1768.

Hutson also played an influential role in Charleston’s political circles. He served five terms in the South Carolina House of Representatives between 1776 and 1788. After the British captured Charleston in 1780, he was held prisoner at St. Augustine, Fla. until July 1781. After he returned to Charleston, Hutson served as the eighth Lieutenant Governor of South Carolina under Governor John Mathews in 1782 and 1783. 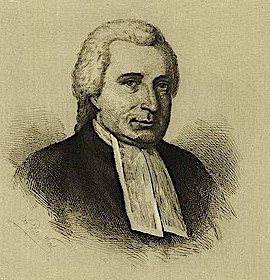 Hutson also served as Charleston’s first intendant mayor, serving in 1783 and 1784. The position was known as intendant until 1836, and has been known as “mayor” since that time. He died in Philadelphia, Pa. in 1795.

The Actor Who Became a Pastor

I’d like to share the grave marker of Richard Hutson’s father, the Rev. William Hutson. It might look familiar in style because it was carved by William Codner, who also produced the Rev. Nathan Bassett’s marker that I shared about in the previous post. 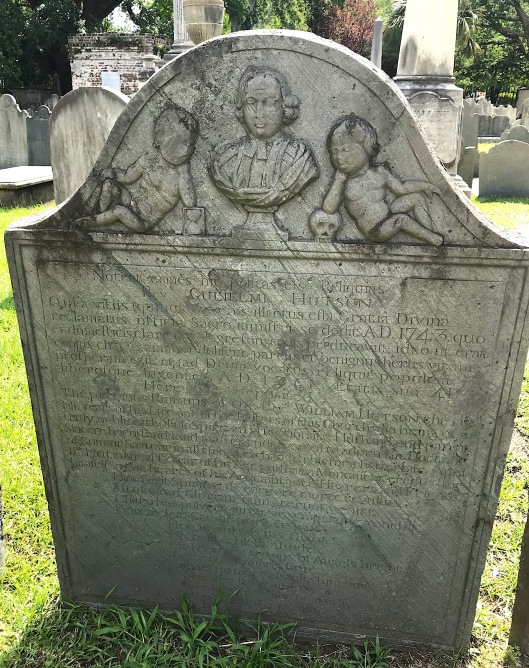 The Rev. William Hutson’s marker is inscribed in Latin.

Born in 1720 in England, William was a stage actor who made his way to America. He was working on the stage in New York when he attended a revival where George Whitfield was speaking. Whitfield was part of the Great Awakening, a religious revival sweeping the new country. As a result, William became a pastor and eventually led the Circular Congregational Church. I wonder if William’s acting skill helped him in the pulpit when delivering sermons. 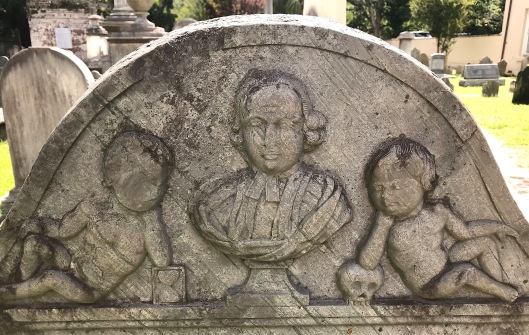 Note the two cherubs flanking the Rev. Hutson. One is leaning on an hourglass and the other on a skull.

The Rev. Huston died in 1761 at the age of 41. The top of his marker fascinates me. Like the Rev. Bassett, there are two cherubs flanking a portrait bust. But if you take a close look at the cherub on the left, he’s leaning on an hourglass. That fits right in with the 18th-century notion that we have little time on the Earth. The other cherub is leaning on a skull, tapping into the motif that we’re all going to die so it’s best to live a good life so we end up in Heaven and not Hell.

“His Turn is Come”

This next marker is truly striking. While much isn’t known about John Warham (1751-1773), we do know his stone was carved by Rhode Islander John Bull. An hourglass dangles on the blade of a scythe, a favorite motif he used on some of his stones. 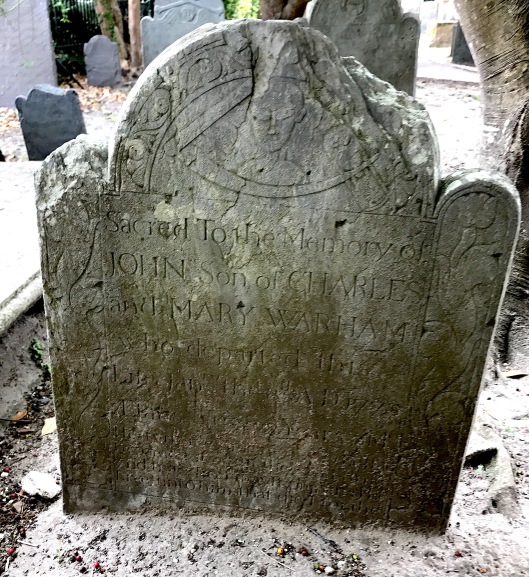 Over toward the Parish House is a plot that Frank Karpiel pointed out to me during our 2018 tour of Charleston cemeteries. It’s a domed brick vault in the plot belonging to the Simmons family. Dating from 1695, many believe this to be the oldest crypt in Charleston. Around it are markers other pioneer families like the Peronneaus and Vanderhorsts. 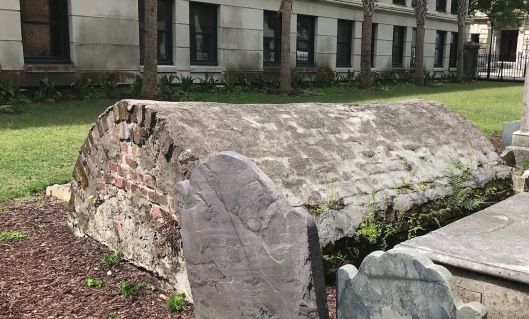 This domed brick vault could be the oldest crypt in Charleston.

There are two portrait-style grave markers I don’t want to leave out. Attributed to carver William Codner, the stones for Isaac Holmes, Jr. and his wife, Elizabeth Stanyarne Holmes, capture details some of his others do not. Note that neither has angels/cherubs flanking the portraits, something Codner liked to do. 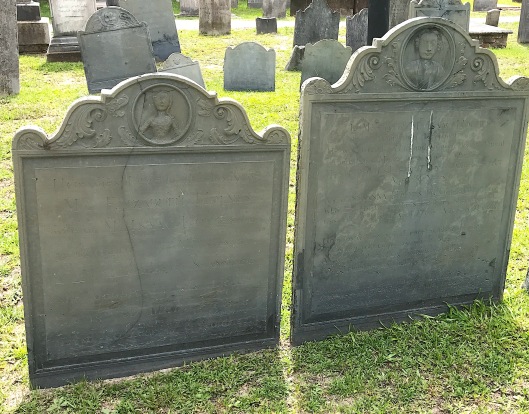 The son of Isaac Holmes, Sr., a native of Boston, Isaac Jr. was a prosperous merchant who was born and raised in Charleston. He married Elizabeth Stanyarne in September 1755 when she was around 16 years of age. She died only three years later on May 18, 1758 at age 19. It looks like they’ve had to repair her stone due to cracks. 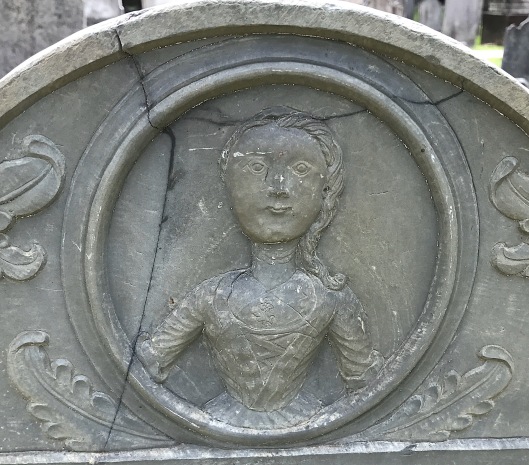 If you get a good look at Elizabeth’s portrait, the detail is amazing. Codner does a lovely job of detailing the curls of her hair, the folds of her gown, and even the ties of her bodice. 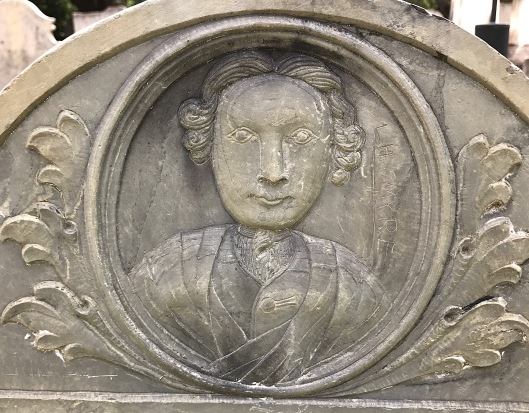 I think Codner did an equally amazing job on Issac and Susannah’s marker. Again, the detail of the hair is apparent. Note the button and buttonhole of his coat. Even the folds of Isaac’s cravat are included.

Isaac died only seventh months after his daughter, Susannah, on Dec. 17, 1763. Here’s part of the inscription on their stone, with the spelling exactly as it was carved:

“Arrested by the Hand of Death”

There are a few more grave stones I’d like to share that date a bit later than previous ones but are still remarkable. This one is for Mary Jane Smith (1740-1765). She was the wife of a CCC deacon, Josiah Smith, according to her stone. 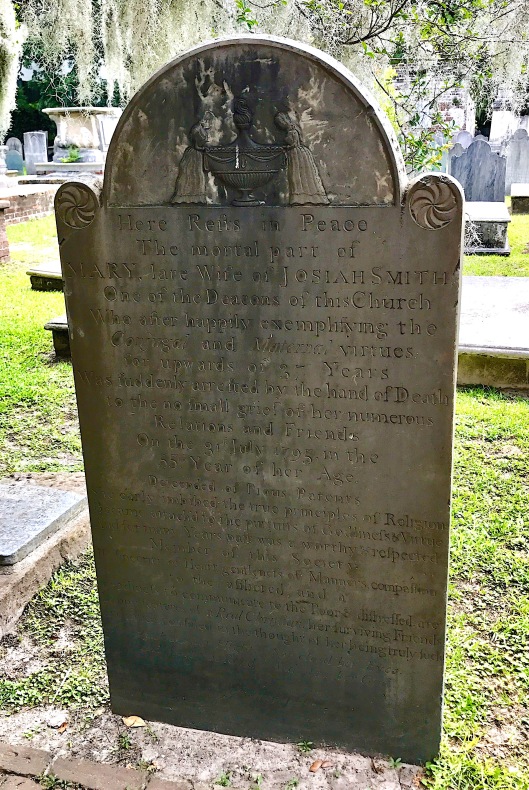 Her marker features an urn flanked by two weeping women, which is keeping with the movement away from soul effigies and portraits. The Classical influence is more heavily felt in this era. Let’s take a look at the top closer up. 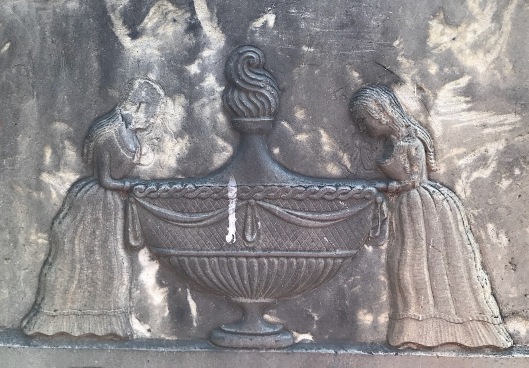 Two women weep on both sides of an urn.

You’ll notice that the urn is quite detailed, from the flame to the draping of the ribbon. I have a notion that the mourners were added later and with less attention, although they are still well done. I think someone else, even much later, added the additional arms bearing handkerchiefs. The face of the mourner on the left was vandalized, sadly.

What’s in a Wreath?

This last monument is for Major David Ramsay (1830-1863), whose life is memorialized by a cut-off column topped by a wreath. A broken off column often meant a life cut short. It was carved by one of Charleston’s best known stone masons, E.B. White (his name is on the base).

Wreaths are ancient symbols, going back to the ancient Greeks, who wore them to signify their occupations, achievements, or status. They also crowned Olympic game winners with laurel leaf wreaths as a symbol of the Greek god Apollo, who embodied victory and achievement.

During the 1800s, in grave iconography, an oak leaf wreath meant strength. Laurel wreaths still meant victory but could also signify the arts/music. The bay leaf wreath often stood for death and mourning.

Educated in the Schools of Charleston he completed his collegiate studies at the University of Heidelburg, Germany. There his natural gifts of intellect aided by industry and stimulated by an honorable ambition secured for him the highest honors of his alma mater.

Returning to his native country he embarked in the practice of law and soon reached an honorable rank of the profession fame and fortune seemed equally with in his reach when at the call of his country he repaired to the field of battle, there as Major of battalion. He fell mortally wounded gallantry fighting in the defense of Battery Wagner on Morris Island. 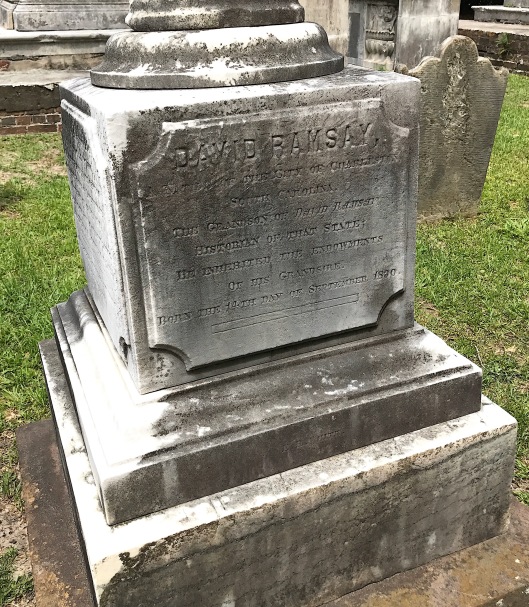 Stone carver E.B. White’s name is on the base of David Ramsay’s monument.

A well-educated man, David Ramsay was practicing law and had attained a seat in the state legislature when the Civil War began. As a Confederate Army officer, Ramsay served as a major in the First South Carolina Volunteer Infantry Battalion, also known as the Charleston Battalion. He died on Aug. 6, 1863 after he was mortally wounded at Battery Wagner on Morris Island, S.C.

David’s grandfather, also named David Ramsay was an American physician, public official, and historian from Charleston. He was one of the first major historians of the American Revolutionary War. He is also buried at the CCC burial ground, albeit with a much humbler marker that I missed seeing when I was visiting.

It’s hard for me to leave Charleston behind. I’m not totally done with this city because I’ve not yet written about Magnolia Cemetery, which I’ve visited numerous times. So look for that to be accomplished in the near future (fingers crossed).

In the meantime, I’m going to leave you with some more CCC markers that I think you ought to see. Thanks for joining me on this long but amazing adventure through Charleston’s historic church yards. 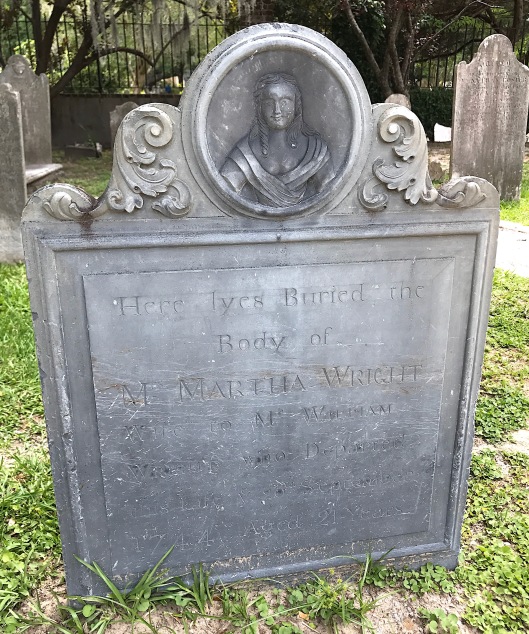 Martha Wright’s stone was one of many carved by William Codner. 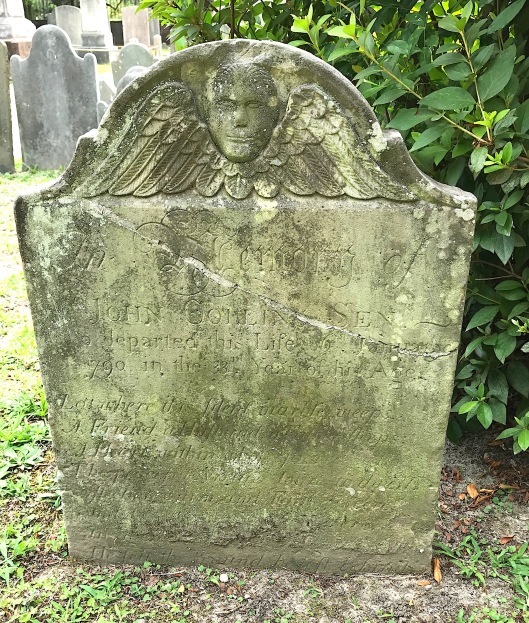 The head on the soul effigy on John Collins’ (1757-1790) marker has an almost modern-looking hairstyle. 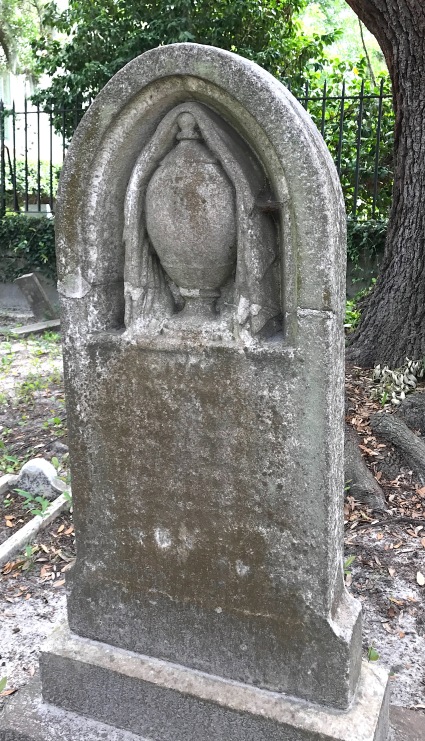 The inscription on this marker is worn off but the beauty of the draped urn remains. 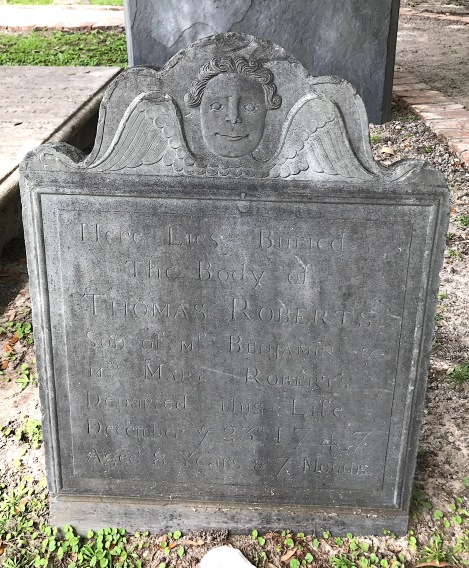 Thomas Roberts (1739-1747) was only eight years old when he died, a sad end indeed. But the impish look on the face of the soul effigy on his marker makes me smile.