After devoting the last several months to the graveyards of Charleston, I’m heading back to Iowa (somewhat familiar territory) and South Dakota (totally new territory). In the summer of 2018, after spending a week at Folly Beach, S.C., I got on a plane for Omaha, Neb. to visit my best friend, Christi. She’s always up for a roadtrip and understands my cemetery obsession.

On the Road to South Dakota

That year, it was our goal to visit Sioux Falls, S.D. I’d never even BEEN to South Dakota and thought that was very cool.

Our first cemetery stop was randomly chosen because I found it on the Find a Grave app as being located not far off of I-29, 50 miles north of Omaha. Some people call it Blencoe Cemetery (after the nearby town) while the sign indicates it is Graceland Cemetery. So I’m going to stick with Graceland.

Like most Iowa cemeteries of this size, Graceland Cemetery has a large sign and is well kept. It’s one of the reasons I keep coming back here to nose around the cemeteries. They respect and take very good care of them, making my job much easier.

On patriotic holidays, the flagpoles lining the main road into Graceland Cemetery are full of American flags.

I could find very little information about the cemetery itself, such as when it was established. The oldest markers I saw dated from the early 1880s. According to Find a Grave, there are about 1,125 total burials recorded at Graceland. Some are unmarked. That’s the extent of what I know.

I didn’t know the story I was going to uncover about Abram “Abe” Michaels until this week when I began doing some research on his marker. I knew he was 31 when he died, so I was curious to know what happened to him.

It’s difficult to trace Abe’s roots. Some records indicate he was born in Cleveland, Ohio while others say he was from Indiana or Iowa. Regardless, he married Ellen “Martha” Kennedy (Glenn) on May 2, 1885 in Sherman, Iowa.

Abe Michaels was originally buried at Little Sioux Cemetery, about 25 miles away from Graceland Cemetery.

On Saturday, March 21, 1891, Abe had spent much of the day at a saloon (newspapers called it a “beer shack”) playing cards and socializing. Newspaper accounts say once outside, he got into a dispute with local men George Welch and John Marley. Witnesses said Welch tried to reason with Abe but instead of calming down, Abe drew a knife. Welch allegedly picked up a piece of a two-by-four and hit Abe in the head with it in self defense.

The story of why Abe didn’t receive prompt medical attention is not clear but he died the next day from his concussion. Both Welch and Marley were arrested for their role in his death and awaited trial for murder.

Martha gave birth to a son, Abram Russell Michaels, on May 13, 1891. I can’t imagine what she was going through at the time. A small newspaper item notes that she purchased a plot at Graceland Cemetery in October the same year with the plan to move Abe’s remains from where they were buried 12 miles away at Little Sioux Cemetery. She apparently did just that.

Abe’s wife, Martha, had his body moved from Little Sioux Cemetery to Graceland Cemetery several months after he died. Article from the Monona County Democrat, Oct. 29, 1891.

On Dec. 3, 1891, George Welch was acquitted of the charge of murdering Abe. As a result, John Marley’s indictment was dropped.

Abe Michaels died two months before the birth of his son.

Untangling Martha’s martial history was tricky. She had married Robert Glenn in 1880 when she was 18 years old. She married Abe five years later. Her marriage to Englishman Samuel Neeson, who was a few decades older than she, came in 1898. After Samuel died in 1918, she married Christoper Decker. She died in 1947 in Arkansas. Her son with Abe, Abram Russell Michaels, died in 1957 in Arkansas as well.

Near the entrance of the cemetery is a small stump grave marker for four-year-old William Earl Noble. He was the son of Jackson Noble and Ida Belle Hogue Noble. It has more detail than most stump stones I’ve seen in the past. It even has fern fronds on the side.

Let’s talk about the oak leaves and acorns that adorn Earl’s stump. I found them rather curious considering he was only four years old when he died.

What Do Oak Leaves Signify?

Oak leaves were a popular symbol on gravestones in the 19th and 20th centuries.    The oak stands for longevity, strength, and power.  It also symbolizes eternity, as the oak produces acorns that grow into more oaks that continue the “family” of trees.  Acorns were signs of independence and strength as well.

According to a newspaper article, little Earl Noble had never had good health.

I am more fascinated by the sweet little gird resting on a short branch coming off the stump. The stump itself means a life cut short. But the bird makes me think of little Earl, just getting started in life and stretching his wings.

The Noble family moved to Mitchell, Neb. in January 1907 and Jackson died in December of that year from pneumonia. Ida remarried in 1910 to J.T. Watson. When she died in 1920, she was buried in Graceland Cemetery back in Blencoe beside her first husband, Jackson, with “Ida B. Noble” inscribed on her marker.

“Death, Thou Hast Conquered Me”

I managed to find one white bronze (actually zinc) marker at Graceland Cemetery and it was made in a style I don’t see often. In addition to a small marker, it includes a rectangular border that goes behind it. I’m guessing that loved ones could plant flowers in the space in the middle.

A native of County Donegal, Ireland, Robert Wilkinson and his wife, Elizabeth, came to America around 1881. He was already in his 50s by then and some of the couple’s eight children were already married and had family of their own. A number of them had crossed the Atlantic just a few years before their parents.

Interestingly, a regular square marble marker is situated right beside this white bronze one.

According to an article in the Onawa Weekly Democrat from March 21, 1895, Robert enjoyed breakfast at his house on the day he died. His death was not long after that and the author of the article concluded it must have been from heart failure. Not sure how he came to that conclusion, but there you have it. 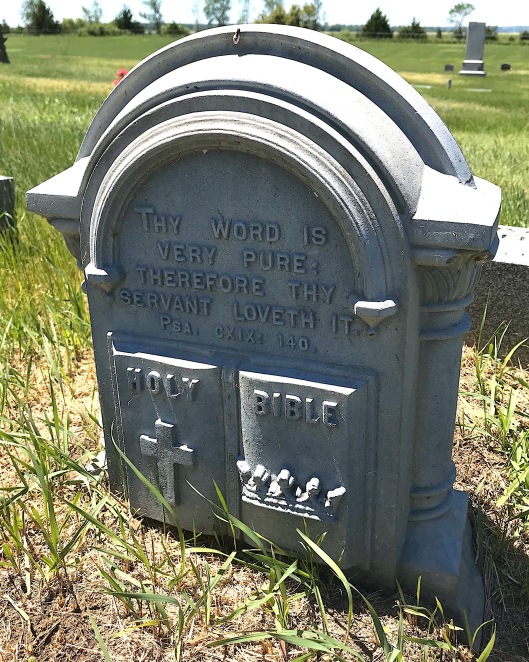 Robert Wilkinson was a member of the Adventist church when he died.

One thing I noticed was that Robert’s white bronze marker was right next to a square marble one with the same information. It matched the style of his other family members. My guess is that one came later. Robert was 68 at the time of his death.

I’m going to finish up my visit to Graceland by sharing with you this glorious double tree monument for George and Martha Edmonds. I’ve seen a lot of tree monuments but not that many double trees. And this one is especially well executed, in my opinion.

George and Martha Edmonds are memorialized by this lovely double tree monument.

A native of New York, George W. Edmonds was born in 1816 in New York. He married Martha Ricketson and at some point, they moved to Plattsville, Ill. to start a family. They did not move to Iowa until sometime around 1880. Their son, Edgar, moved there as well. Their daughter, Rosina, had married and stayed behind with her family in Illinois.

George died on Oct. 19, 1892. Martha died on Oct. 5, 1894. I am guessing that Edgar may have commissioned a carver to make this amazing double tree monument. Notice how the upper branches are intertwined.

I noticed that two names at the bottom of the monument indicating the company that produced it, but was unable to find out anything about them since my picture didn’t get their entire names. But they were located in Council Bluffs.

I wish I had gotten a better picture of the monument makers’ names.

You can also find two “logs” with the words “father” and “mother on them in front of the monument. It would be great if someone could reclaim them from the ground that’s threatening to swallow them up. 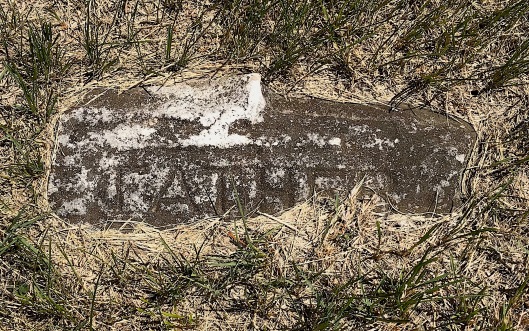 Edgar died in 1933 and was buried at Graceland according to both his death certificate and a newspaper article. I did not see a marker for him there. His wife, Melissa, died in 1934. There is a stone for her at Plattville Cemetery back in Illiniois where both were born and raised. Edgar’s sister, Rosina, is buried there as well.

Back on the Road

Having spent a some time wandering Graceland Cemetery, it was time to head the 12 miles up the road to Onawa Cemetery. Meet me there next time for another adventure.

A last look at Graceland Cemetery.