Onawa Cemetery, also located in Monona County, is just up the road from Graceland Cemetery. It’s a bit bigger, with about 4,400 burials listed according to Find a Grave.

Onawa Cemetery is still an active site, with many recent burials.

Established around 1857, there’s some debate on how the town of Onawa got its name. Some believe it was a contraction of the pioneer phrase “on-a-way”. But most seem to think T. Elliot, the gentleman who is thought to have named Onawa, had a love for Longfellow’s poem “Hiawatha”, which includes the Native American word “Onaiweh”. The translation means “wide awake.” This seems plausible since Monona County is said to come from the Native American name for “peaceful valley.”

I could find nothing abut Onawa Cemetery itself, when it was established, etc. I saw some markers dating back to the 1870s and I’m sure there are some that date earlier than that.

Like a lot of cemeteries, Onawa has a memorial to honor the town’s Civil War dead. I want to point this one out because there’s some history behind the company that created the bronze statue on top of the five-ton red granite base. I apologize that due to the bright sunlight, you can’t see the soldier’s face amid the shadows very well.

If you look on the base of the statue, you can make out the name of the company that made it, the W.H. Mullins Company of Salem, Ohio. Sorry it’s rather blurry.

You can find W.H. Mullins statues in many cemeteries, North and South.

The company’s origins were as follows. Thompson and Bakewell came first, then Bakewell and Mullins in 1882, then W.H. Mullins in 1890. Statues were just one of the many items they sold, from metal boats to fences to architectural pieces. I found one of their catalogs from 1894. These are three of the statues they offered. They were often made of sheet zinc or copper, sometimes bronze. That’s what Onawa’s soldier is made of.

This is the 1894 edition of the “Catalogue of architectural ornaments and statuary, in sheet zinc, brass or copper : manufactured by W.H. Mullins, Salem, Columbiana Co., Ohio.”

A statue like one of these could cost $300 to $500 depending on the size and material. According to a newspaper article, funds for the 20-foot monument came from a local tax imposed by the county board of supervisors. The total cost of the monument was $2,000.

Onawa’s monument was unveiled on Memorial Day 1916 with great fanfare and speeches, preceded by a ceremony at the local opera house. The red granite base was secured by the local monument firm of Sheely and Lane, who had it brought from Council Bluffs.

It’s important to note that W.H. Mullins produced similar statues for Confederate monuments in the South, such as one in Pittsboro, N.C. So if you’re ever in a cemetery, regardless of what part of the country, odds are good you might get a glimpse of a W.H. Mullins statue. Just look at the base.

Last week at Graceland Cemetery, I featured a stump marker for a child and a lovely double tree monument for an elderly couple. I hope you don’t mind but I naturally gravitate to this style and I found a few wood-themed gems at Onawa that I fell in love with.

This stump marker is for the children of Charles Huntington and Rebecca Anne Norris Huntington. While that indicates there was more than one child, only one name is inscribed on the marker. Charles was employed by the local Onawa bank as a cashier.

Only one child’s name is inscribed on the Huntington marker.

I found the death notice for Sam Norris Huntington, who was the second son of the family. Sam died at the age of seven from “diphtheria and inflammation of the bowels”. The 1910 U.S. Census indicates that of the four children the Huntingtons had, two survived. It’s possible the other was an infant who died at birth or soon after.

Can you see the dove?

This stump, indicating a life cut short, has some lovely details. There’s a dove with its wings unfurled perched on a branch beside the inscription of Sam’s details. Fern fronds decorate the base of the stumps and you can glimpse a tiny bird amid the wood “grain” that’s carved near the bottom as well.

The Kendall family monument is a glorious creation of wood-themed branches. Thanks to the digitized Onawa newspapers, I had some information to go by in tracing their history. 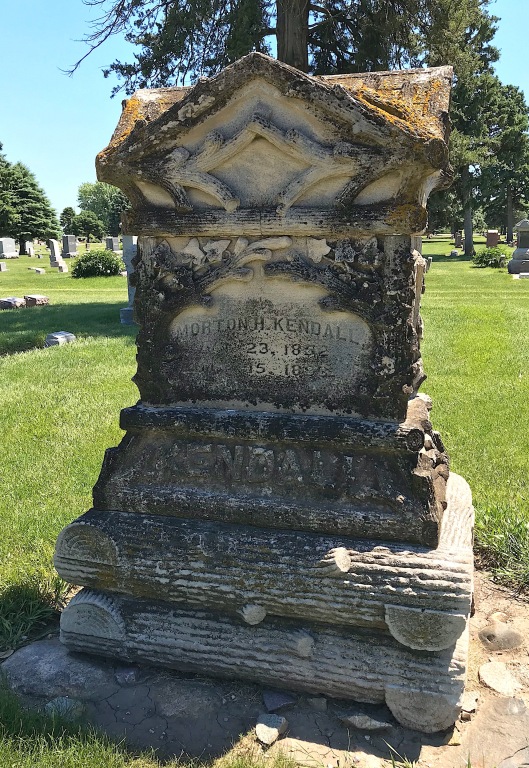 Born in 1853 in Elgin, Ill., Morton Kendall married Florence Wilcox there in 1878. He was already living in Iowa by that time. It’s my belief that Florence’s mother, Angie Greene, moved to Iowa with her daughter. She appears on the 1880 U.S. Census as living with them. Angie is listed in the “widowed/divorced” category.

Was Angie Greene a widow or divorced?

“Re-united in the Home Above”

Morton died on March 15, 1893 at the age of 10 from Bright’s Disease (kidney disorder), according to his death notice, which also mentioned he had not been in good health for several years but was a well-liked businessman in the community.

Florence was the last one in the family to die.

Florence died a few years later on at age 37 on Jan. 8, 1896. One can only imagine how hard it must have been on her own. Her death notice said she was laid to rest beside her husband and that, “Their spirits are re-united in the home above.”

I noticed that in addition to the grand marker, each family member was represented with a “log” bearing their name: Morton, Florence, Lyle and “Grandma”.

Each family member has their own “log” to represent them, akin to a footstone.

Not far from the Kendall monument is another wood-themes monument that I think was probably made by the same maker. They share a lot of similarities, especially the short, knobby “branches” and split “log” base. 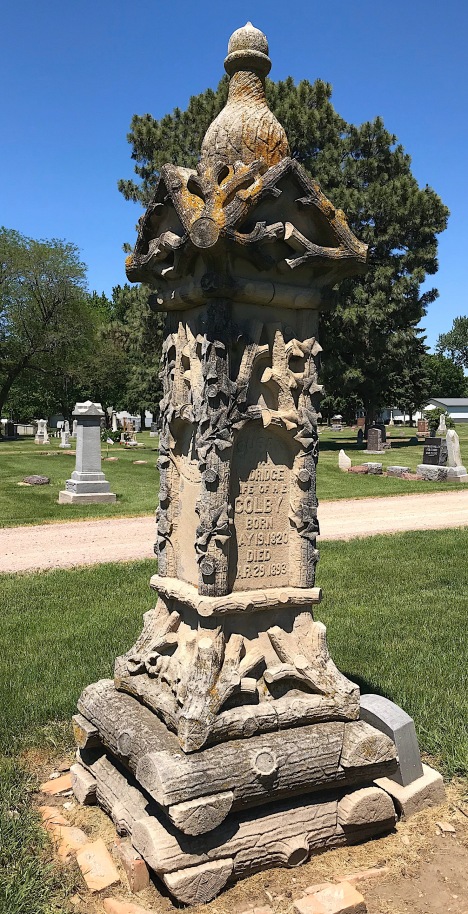 The Colby monument is only for two people.

Born in 1822 in Darien, N.Y., Harry Eugene Colby married Susan Maria Eldridge in Kane County, Ill. This is the same area that Morton and Florence Kendall were from. They moved to Monona County in 1855 when the area was just starting to develop and Harry was considered one of its pioneers. The couple had three children: Helen, Frank, and Harry.

The story of Susan’s death was written in a newspaper account. According to the Monona County Democrat, she was caring for her infant granddaughter on March 29, 1893 at her home. She went to walk the baby home a block away when she felt ill and asked a friend passing by to do it for her. She then sank against the fence in front of a neighbor’s house and had to be assisted onto the porch. She died soon after. She was 72 years old.

Harry Colby’s inscription is hard to make out due to the shadows.

Harry, who had been in business with son Frank, retired soon after Susan’s death but will still much respected and beloved by the community. He died at the age of 80 on Jan. 24, 1903.

The Mystery of Alvin Perkins

This last marker is a bit of a mystery. Albert Perkins was born in 1900 and died in 1917. But who was he? There was no memorial for him on Find a Grave, so I created one for him.

According to Ancestry, the first record for Albert is at the Northern Hospital for the Insane in Redfield, South Dakota. He was nine years old and from Michigan. How did he end up there at such a young age?

Who was Alvin Perkins?

I learned that the hospital was actually meant to be a place for children with developmental disabilities, those consider “feeble minded.” Yet records indicate that Alvin could both read and write. 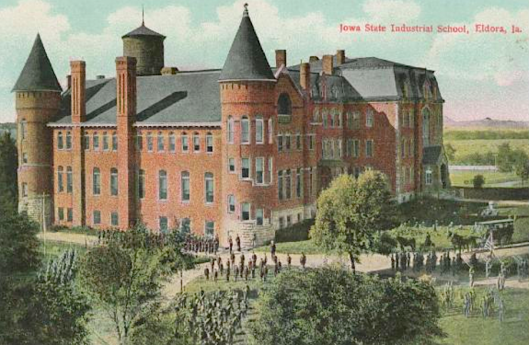 The Industrial School for Boys was located in Eldora, Ill.

At the time Alvin was there, the Industrial School’s goal was to teach young boys who had fallen into trouble some kind of trade in hopes of improving their future. It’s possible someone in Onawa hired Alvin to work on their farm.

I could find nothing about how Alvin died or who might have paid for his grave marker. His death was not reported in the local newspaper. That he has a marker at all is sort of amazing. Yet I’m sad that this is all that’s left to indicate he ever lived, as short of a life as it was.

Next time, I’ll be at Floyd Cemetery in Sioux City.