My Iowa/South Dakota 2018 cemetery adventure actually ended in Nebraska! That doesn’t tie up my “Iowa/South Dakota” trip in a tidy package but it was a part of my visit so it doesn’t feel right to leave it out.

Voss-Mohr Cemetery is located in southwest Omaha in the suburb of Millard, not far from where Christi lives. I learned that it began as two family cemeteries. The Vosses buried their loved ones in the northwest corner of their farm and the Mohrs buried their family members in the northeast corner of their farm. The burial grounds adjoined to form the basis of the Voss-Mohr Cemetery. The area was known as Chalco at the time.

At some point, graves from the Stender family’s cemetery were moved to Voss-Mohr but nobody is sure when. Today, Voss-Mohr is a private cemetery managed by the Voss-Mohr Cemetery Association and burials are still taking place today. Additional room is available for future burials. Well maintained, it is located on busy Harrison Street and easy to access.

So why stop at Voss-Mohr? We were actually driving by it when I saw this large monument from the road. It was a great excuse to pull over and take a look. 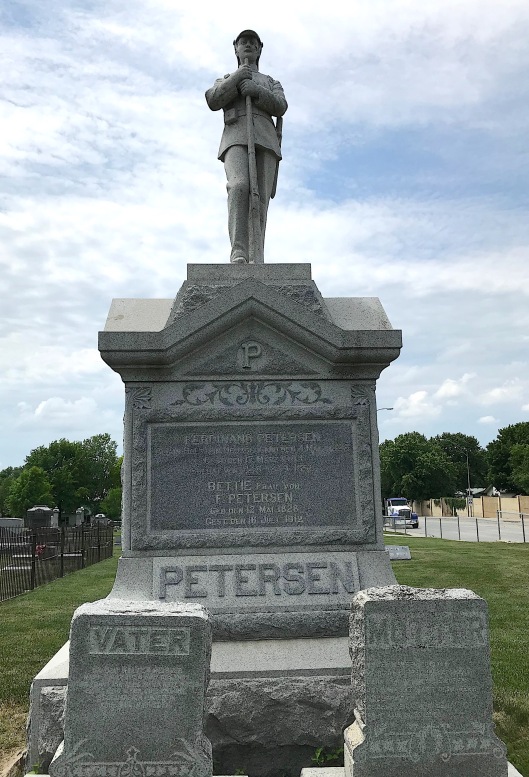 Who was Ferdinand Petersen and why did he do to merit such a large monument?

It’s not often you see a statue on top of a monument in the U.S. of a man in a German military uniform. So I was immediately curious to figure out how Ferdinand Petersen merited such a grand monument.

Born on May 4, 1828, Ferdinand Petersen was from the Schleswig-Holstein region of Germany. It’s located in the far northern part of the country bordering Denmark. That would be a key factor in his future.

Ferdinand Petersen served in the First Schleswig War from 1848 to 1850.

According to his monument, Ferdinand fought in the German Wars of 1848, 1849, and 1850. From what I could find out, the First Schelswig War or Three Years’ War was the first round of military conflict in southern Denmark and northern Germany rooted in the Schleswig-Holstein Question. It involved the issue of who should control the Duchies of Schleswig and Holstein.

It’s a safe bet that it was a desire to leave the strife of war behind him that caused Ferdinand to emigrate to America around 1850. How he ended up in Nebraska Territory is uncertain but around 1858, he married Elizabeth “Bettie” Fuellner. They only had one child, Lizzie, around 1864.

Lizzie married Adolph Voss at the age of 32 in 1897. Adolph had also emigrated from the Holstein region with his family around 1876 as a boy. That explains how the Petersens came to be buried in Voss-Mohr Cemetery. The 1900 U.S. Census shows Ferdinand and Bettie living with their daughter and son-in-law on their farm.

The inscription on Ferdinand Petersen’s “Vater” marker is in German.

Ferdinand died on March 17, 1903 at the age of 74. Fortunately, someone posted an article from the Papillion Times that described the monument and how it came to be at Voss-Mohr Cemetery.

Last week at the cemetery a mile and a half south of Millard was erected one of the finest monuments in the state to the memory of Ferdinand Peterson, who was one of the oldest residents of Sarpy County. The monument was finished and erected by Hodges & Baldwin of Fremont at the cost of $500. It is of the best dark barre granite, with a granite statue of a soldier standing at parade rest, with a uniform like they wore in the German War of 1848, 1849, and 1950 of which Mr. Petersen was an honest soldier. The monument stands 15 feet high and made two train car loads from Fremont to Millard. The bottom base weights over eight tons and took ten horses to haul it from the station to the cemetery.

The inscription on Ferdinand’s marker is in German but someone on Find a Grave had a translation:

As the World’s Master sent me to the last Peace, then you all rest good night. Thy work is complete, now have a blessed sleep in Peace.

I’m intrigued by the effort and expense that went into providing this fine monument for a farmer. He must have been much loved by his family and community. I wish I knew more about what role he played in the community but was unable to do so.

Bettie Petersen died in 1912, nine years after her husband.

Bettie continued living with Lizzie, Adolph, and her grandchildren until her death in 1912. She is buried beside Ferdinand.

Lizzie and Adolph had one son, Ferdinand, in 1902. They moved to Long Beach, Calif. around 1915. Lizzie died in 1919 and her body was sent home for burial at Voss-Mohr Cemetery. Adolph remarried in 1924 to twice widowed Nebraskan Mary Jensen Reeh, who had four children of her own. Adolph died in 1947 in California but he, too, was sent back to Nebraska for burial beside first wife, Lizzie. Son Ferdinand died in 1963 and is buried in California. 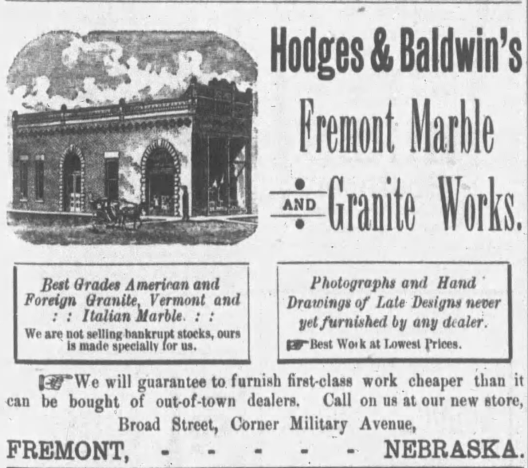 Hodges & Baldwin Fremont Marble and Granite Works (1894) were a mainstay in Nebraska for 50 years. (Photo Source:

It’s not often you get the luck of knowing who actually provided a monument. As the article points out, Ferdinand’s monument came from the Hodges & Baldwin Marble and Fremont Granite Works. Fremont is located about 30 miles northwest of Voss-Mohr Cemetery.

The History of Hodges & Baldwin

George Henry “G.H.” Hodges came to Fremont around 1881 and worked as a stonecutter. At some point, he and L.W. Baldwin forged a partnership, opening their own monument works in Fremont. Over the years, they grew and expanded their operations, always operating a store in Fremont where customers could view samples of the stone available and designs.

The business had its fair share of ups and downs. A lawsuit that resulted after the accidental death of a worker went all the way to the Supreme Court. One article I found reported the theft of a horse from the monument works’ barn. But for the most part, Hodges & Baldwin prospered.

Hodges & Baldwin stayed in business until both men retired around 1936. G.H. died in 1940 at the age of 76. He and his first wife, Lura, share a beautiful monument.

Both G.H. Hodges and L.W. Baldwin are buried at Fremont’s Ridge Cemetery.

Julius Schroeder began farming in Nebraska but gave it up in 1875 due to poor health.

The tree-shaped monument for Julius Schroeder and his wife, Wilhelmine, stands out. There’s also a bit of irony about it that I’ll share later. A native of Germany, Julius was born in 1836. He married Wilhelmine Millitz around 1857. They journeyed to America in 1868.

They landed in Louisiana, traveling through Texas to settle in Nebraska where Julius farmed until 1875 when his health declined. In 1880, Julius was operating a saloon in what was then known as McCardle, just north of the area that became Millard. Julius was part of the first board of trustees when Millard was incorporated in 1885.

Although Julius was still keeping the saloon, he also owned a 320-acre farm that prospered. He and Wilhelmine would have six children who lived to adulthood. 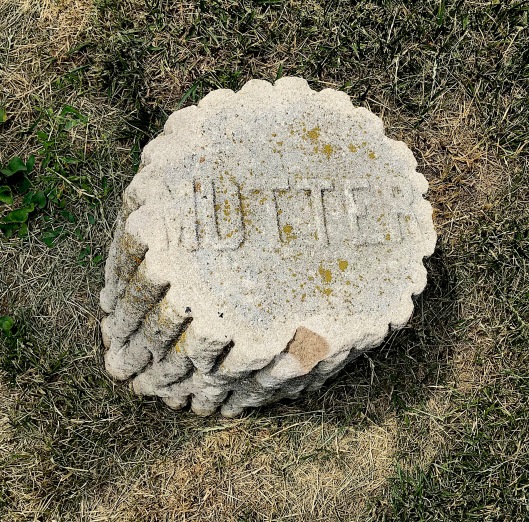 “Mutter” is German for the word “Mother”, which was appropriate for Wilhelmine Schroeder.

Julius Schroeder’s “vater” marker is log-themed to fit with he and Wilhelmine’s tree monument.

Now here’s why I think the Schroeder’s tree monument is a bit ironic. In doing a Newspapers.com search for Julius, I was only able to come up with this interesting item from the Nebraska State Journal (Lincoln, Neb.) on Aug. 28, 1896. In those days, newspapers thought nothing of publishing your financial worth and that included any insurance you might have had.

Julius Schroeder’s life insurance came from his affiliation with the Knights of Pythias fraternal organization.

Mattie Stender was only 22 when she died.

Husband John would remarry to Sophia Lupteen not long after Mattie’s death. The couple had five children, four living well into adulthood. John died in 1902 and is also buried at Voss-Mohr. Sophia died in 1891 but if she is buried at Voss-Mohr, her grave is unmarked.

With all three of these markers, German was used for the inscriptions. Even the German “mutter” for mother and “vater” for father were not considered unusual at the time. This acceptance would change in the next decade when World War I approached and anti-German sentiment began to rise. Some immigrants would even change the spelling of their names entirely to downplay their German heritage.

Visiting Voss-Mohr was a pleasant way to end my Iowa/South Dakota adventure and it’s one I’ll remember fondly. Going cemetery “hopping” with my best friend is time I always treasure.