About 10 days after returning to Atlanta from my Iowa/South Dakota 2018 adventure, I got on a plane with my family to Jackson Hole, Wy. for a much-awaited vacation to Yellowstone National Park and Grand Tetons National Park.

We only visited two cemeteries for a number of reasons. In fact, we didn’t stop at any cemeteries in Grand Tetons. I couldn’t find one that was close to our route. Yellowstone does have a few cemeteries. One of them, Kite Hill Cemetery, involves a hike and only has one marker so we skipped it. We did visit Fort Yellowstone Cemetery in Mammoth Hot Springs, but I’ll get to that one in a few weeks.

The other cemetery we visited was Gardiner Cemetery in Gardiner, Montana, which is just outside the North Entrance of Yellowstone National Park. Truth be told, the food (in my opinion) offered in the Xanterra-operated facilities inside the park leaves a lot to be desired. So we ate a number of meals in the town of Gardiner. The cemetery is very close to “downtown” so it was an easy trip to make. The day we stopped at the cemetery was drizzly and overcast, as the pictures show.

One great resource I had for research is “Death in Yellowstone: Accidents and Foolhardiness in the First National Park” by Lee H. Whittlesey. With a title like that, I was easily persuaded to purchase it.

The Roosevelt Arch is located at the North Entrance to Yellowstone National Park. The cornerstone was laid by President Theodore Roosevelt on April 24, 1903 and covered a time capsule.

Before we exited Yellowstone at the North Entrance, we stopped to take photos of the towering Roosevelt Arch. It has a connection with Gardiner Cemetery that I’ll get to later.

The idea of the arch is attributed to Hiram Chittenden, who thought the area around Gardiner was not sufficiently grand. Before 1903, trains brought visitors to Cinnabar, Mt. Cinnabar was a few miles northwest of Gardiner and travelers would transfer to horse-drawn coaches to enter the park. In 1903, the railroad finally came to Gardiner. With development of the Gardiner train station, the arch was proposed as part of the station ensemble.

Construction of the arch started on February 19, 1903, and was completed on August 15, 1903, at a cost of around $10,000. President Roosevelt was visiting Yellowstone during construction and was asked to place the cornerstone for the arch, which then took his name. The cornerstone laid on April 24, 1903 covered a time capsule that contains a Bible, a picture of Roosevelt, local newspapers, and other items. Several thousand people came to Gardiner for the event. 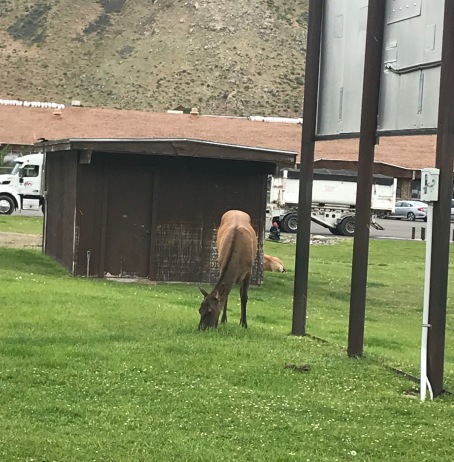 Chris pulled into a parking lot by Gardiner High School’s scoreboard so I could snap a picture of this grazing elk.

Soon after we passed through the arch and into Gardiner, we were not greeted by people but by elk lounging around Gardiner High School’s track. I later learned that the school is located on the former grounds of the Northern Pacific Railway Gardiner train station. The contrast between the school and the wildlife made me wonder how peacefully the two manage to coexist.

Gardiner High School’s mascot is a bear. I wonder what this elk thinks about that.

Getting to the cemetery wasn’t difficult. At first, it looked like the gates were locked but the chain was only secured with a wire you could unwind.

Death of a Tinker

Not much is known about how Gardiner Cemetery began but it’s also known as Tinker’s Hill Cemetery. That’s probably because the first “official” burial there is thought to be of a 60-year-old tinsmith (also called a “tinker”) named John Hartz.

While on a horse that reared up on its hind legs, Hartz tried to keep from being crushed beneath the animal. In the process, Hartz hit his head on a rock and died without regaining consciousness. This took place on Oct. 3, 1886. I didn’t see a marker for Hartz at the cemetery and there’s no photo of one on Find a Grave.

According to Whittlesey, at the time of the cemetery’s establishment, it was outside of park boundaries. Today, it is privately owned by the Eagles’ Club of Gardiner, which recently disbanded. Its representatives are working to get Yellowstone National Park to accept the cemetery. I don’t know if they’ve been successful, but it looked to be in good shape when we were there.

Whittlesey goes on to point out that almost all of the 1880s and many 1890s graves are now unmarked because the stones have long ago fallen from years of neglect. There are at least 50, maybe 77, unmarked graves, he says. Find a Grave lists about 200 memorials for Gardiner Cemetery.

This is the Fitzgerald family plot at Gardiner Cemetery.

Before I talk about Fannie, let me back up a little. Selleck Fitzgerald, Fannie’s father-in-law, was a native Iowan who married Mary Ann Brown in 1863 in Wyoming. After living in several Western states, the couple settled in Montana in 1873. Henry was one of their eight children, born in 1866.

Henry married Fannie Roche on Sept. 30, 1885 in Gallatin, Mt. A son, Roy, was born the next year. Another son, David, was born on July 5, 1888. Sadly, Fannie died of what was then called “puerperal fever”, a common bacterial infection following childbirth often caused by poor hygiene during delivery. It was a common cause of death for new mothers. 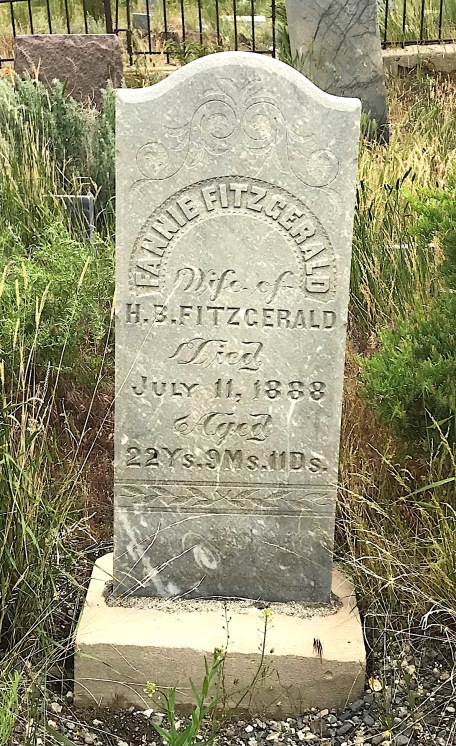 Henry remarried in 1897 to Estella Alderton. Oddly enough, Roy is not listed as living with them on the 1900 Census. I could not find Henry in the 1910 Census but he is listed as living in Stillwater County, Mt. in the 1920 Census. He is listed there as a widow. Roy’s name does appear in Henry’s obituary after he died in 1932. He is buried in Nye Cemetery in Nye, Mt. I don’t know where Estella is buried.

Tragedy in the Fitzgerald family was not limited to Henry. His older brother Ambrose’s wife, Laura, knew her fair share. Ambrose was born in 1864 and in 1891, he married Wisconsin native Laura Hansen. On March 19, 1893, son Willie was born. Hazel was born on March 29, 1895. For reasons his obituary does not note, Ambrose died six months after Hazel’s birth on June 9, 1895. He was only 30.

Henry Fitzgerald’s older brother, Ambrose, died at the age of 30. His marker is on the left of the gate beside his children.

Laura remained in Gardiner with Willie and Hazel, possibly supported by her in-laws and husband’s siblings. By the time of the 1900 Census, she was managing a hotel in Gardiner. But her grief was not over. Willie died on February 21, 1900 at the age of six from spinal meningitis, according to a local newspaper. 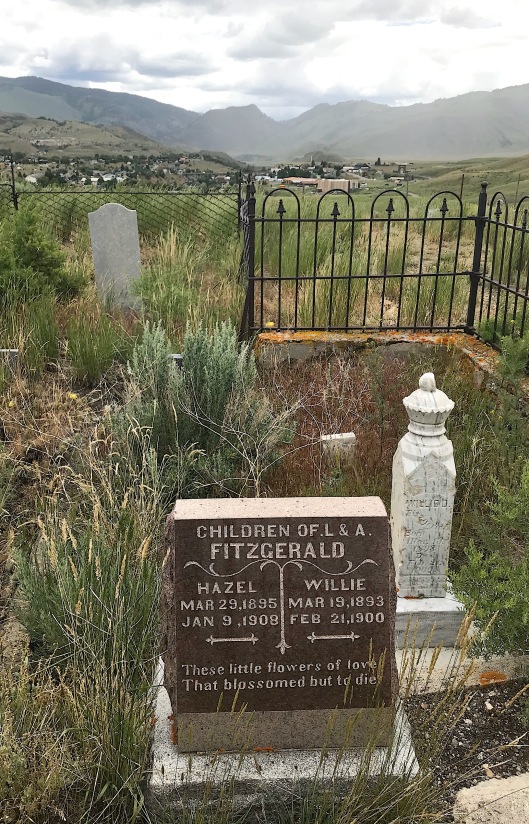 Willie and his sister, Hazel, died eight years apart. Willie has a separate marker of his own to the right and behind the one he shares with Hazel.

“These Little Flowers of Love”

For reasons I could not uncover, Hazel died at the age of 13 on Jan. 9, 1908. The 1910 Census lists Fannie as living in Bozeman, Mt., working as a servant. She died at the age of 53 on April 21, 1912. I don’t now if she was still living in Montana but she is buried in Newport Lutheran Church Cemetery in Wisconsin, and shares a marker with her brother, John.

As it turns out, Henry and Ambrose’s father, Selleck, outlived his two wives and three of his children. He died in Fishtail, Mt. on March 22, 1932 at the age of 92. His first wife, Mary, died in 1906 and is buried beside him at Gardiner Cemetery. His second wife, Emily, died in 1920 and is buried at South Street Cemetery in Portsmouth, N.H.

Whittlesey’s book mentions a Montana pioneer named “Uncle” John Yancey that’s buried at Gardiner Cemetery so I looked through my photos. Sure enough, I had photographed his grave. It’s Yancey who has the Roosevelt Arch connection.

Born in 1826, John Yancey was a Kentucky native. In the 1870s, shortly after the creation of Yellowstone National Park, he turned up as a prospector in the area of the Crevice Creek gold strike on the northern boundary of the park. With the money he made, he established a way station on the Gardiner to Cooke City road inside the park in 1882. Someone who met Yancey during a visit in 1896 described him as a “goat-bearded, shrewd-eyed, lank, Uncle Sam type.”

Undated portrait of “Uncle” John Yancey, a colorful character who ran the Pleasant Valley Hotel for many years.

In April 1884, the Department of the Interior granted Yancey a 10-acre lease in nearby Pleasant Valley to establish a hotel. Soon thereafter, Yancey constructed a five-room hotel he named Yancey’s Pleasant Valley Hotel. While the housekeeping left something to be desired, the hotel was a success and many travelers stayed there.

“Uncle” John Yancey died soon after he attended the April 1903 dedication of the Roosevelt Arch.

Yancey was 77 when he traveled to Gardiner to witness the dedication of the Roosevelt Arch by President Theodore Roosevelt on April 24, 1903. Yancey not only witnessed the dedication, he apparently met President Roosevelt that day. Unfortunately, Yancey caught a cold soon after and died in Gardiner of pneumonia on May 7, 1903.

While Gardiner Cemetery is small, there are many more stories to share from this picturesque burial ground. I’ll have more in Part II.