After a three-week break, I’m ready to tackle the rest of my visit to Pioneer Cemetery in Dallas, Texas.

Pioneer Cemetery is practically in the “front yard” of the Dallas Civic Center.

There’s a story I have to share about a woman buried at Pioneer. Her stone’s inscription is not very clear now due to erosion and time. But her story is too good not the share.

One of 13 children, Juliette Abbey Peak was born May 8, 1837 in Warsaw, Ky. In 1855, her family settled in East Dallas. Her father, Colonel Jefferson Peak, later developed his farm and platted streets, creating lots for other settlers coming to Dallas. Peak, Worth, Junius, Carroll, Flora, Harwood, Field, and Victor Streets were named for Peak family members.

Only 23, Juliette Fowler was pregnant with her second child when she was widowed.

Beautiful and kind, Juliette was Dallas’ first May Queen. She married attorney Archibald Young Fowler in 1857. Their children, Ada and A.Y. Jr., both died as infants. Her husband died from wounds sustained in an argument with the Tarrant County sheriff. You can read more about that here. Julia, who was pregnant with their second child at the time, became a widow at 23. She returned to Dallas and never remarried.

Julia spent the rest of her life focused on caring for others and doing what she could to help people in difficult circumstances. She adopted a young boy she found abandoned in her church. She erected cottages in Chautauqua so young female teachers from Texas could rest and recharge. She cared for her aging parents, all while envisioning and researching methods and treatments for a secure refuge for orphans and widows.

Juliette Fowler was buried next to her husband, Archibald Fowler. Their two children are buried in unmarked graves.

Juliette died at age 52 on June 4, 1889 in New York, seeking treatment for an ear infection. Her will designated $4,000 and 15.5 acres of land in East Dallas to build a home for orphans and widows. Through this act of benevolence, she became known as Dallas’ first major philanthropist. Juliette Fowler Communities, which includes a senior living community and transitional housing for young girls, is still going strong today.

The spiffy new marker for the Rev. William Ceiton Young caught my attention. I am thinking he either did not have a marker placed when he died or if there was one, it was damaged so it was replaced by this one. 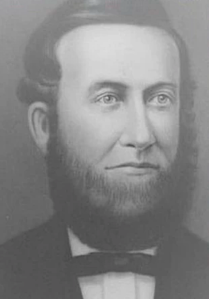 Rev. Young named one of Dallas’ streets after his mother, Marilla.

A native of Trigg County, Ky. born on August 7, 1827, Rev. Young entered the Methodist ministry in early 1849 and was a member of the Memphis Conference for three years. From 1852 to 1865, he was pastor of five different churches in Arkansas and three in Louisiana. He served as a Missionary Chaplain to the Arkansas Confederate Cavalry as well.

Rev. Young married Mary Pipkin in Arkansas in 1857. They moved to Dallas in 1865. He served one term as a Dallas County District Clerk (1867-1868) and was a three-term alderman for the Fourth Ward, which included the Young’s home (called The Cedars) during he 1870s.

Rev. Young died in 1921 at age 93. It’s fitting that Pioneer Cemetery is located near the intersection of Marilla and Young Streets.

Deaths of Lillie and Alma Young

As you’ve learned from reading this blog, couples often had large families in prior centuries but many of these children did not survive. Rev. Young and Mary had several children during their marriage but many did not live long lives. Sadly, in 1885, the Youngs lost a son and a daughter, Alma and Lillie. 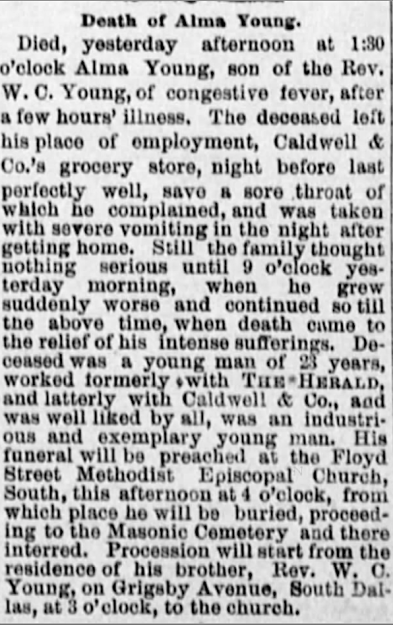 Alma Young was the second child, born in 1861. According to his obituary, Alma was working at a grocery store at the time of his death. Then 23, he had previously worked at the Dallas Herald. On the evening of June 10, 1885, Alma came home from work complaining of a sore throat. He grew worse through the night and died the next day. The diagnosis was “congestive fever”, which was a term used for malaria at the time.

Lillie, age 15, died a few months later on Sept. 19. Her obituary only says that she died suddenly but not the cause. It also noted rather melodramatically:

The sensation among her young associates has been most marked, and with common accord, they exclaim, “If Lillie has gone, how soon may we follow!” 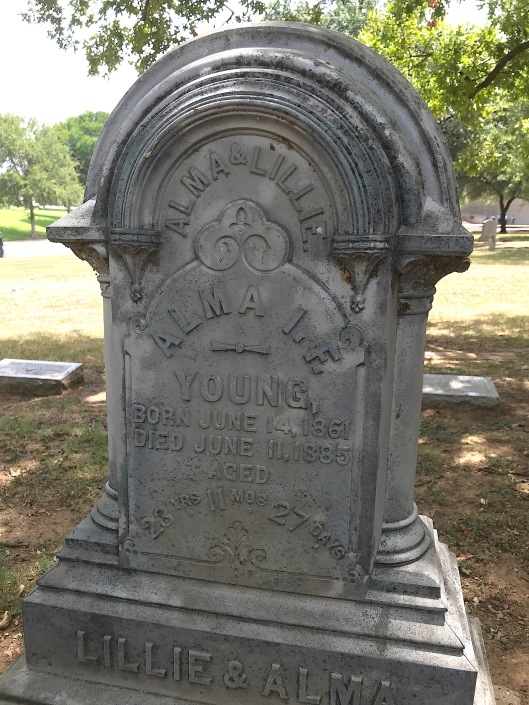 The Youngs purchased a single white bronze marker for Alma and Lillie, the only one in Pioneer Cemetery. It has a silver color to it, which I don’t often see because usually they have a greenish gray color. 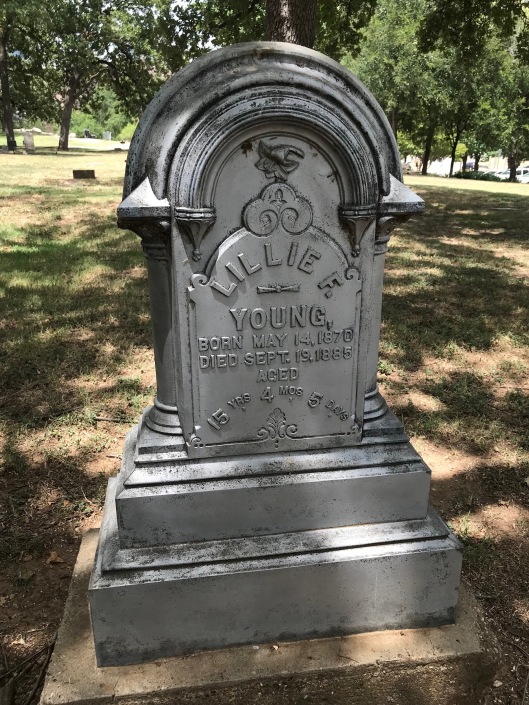 The cause of Lillie Young’s death is not known but it was sudden.

The only monument with a statue in Pioneer Cemetery is located in the Eakins family plot. It represents the lives of John J. Eakins, his wife, Ophelia, and several of their children.

Born in Henderson Co., Ky. in 1822, John J. Eakins came to Dallas in 1849 after serving as a captain in the Mexican War (1847-1848). He married Ophelia Crutchfield, a fellow Kentucky native, in 1850. According to Ophelia’s obituary, they had eight children together.

The Eakins plot features the only monument with a statue in Pioneer Cemetery.

Eakins is possibly best known for selling 60 acres of land to the City of Dallas in exchange for $600 (some articles say he donated it). The land became what is known today as Old City Park or Dallas Heritage Village.

The park was originally designed to be an “aesthetic, driving park” where Dallas residents could drive their carriages while enjoying fresh air and scenery. In other words, it was a place to see and being seen. Later, City Park housed Dallas’ first zoo. 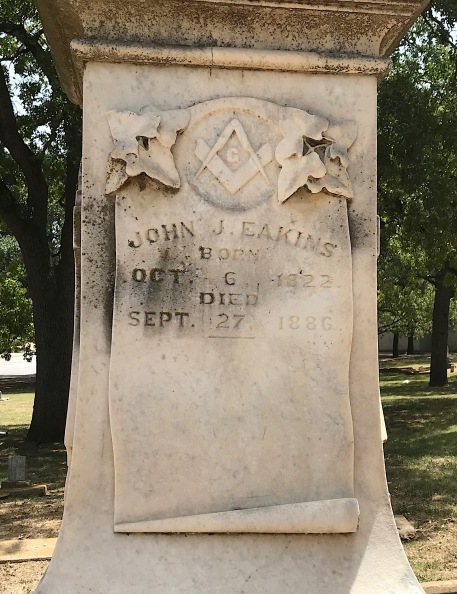 John J. Eakins was a Mason, ensuring his place in the Masonic burial ground that is now part of Pioneer Cemetery.

I did find it interesting that when reviewing a timeline of City Park’s history, I learned that twice it was suggested that it be named Eakins Park. Both times it was rejected, first in 1887 after John Eakins died and again in 1902.

The names of five of John and Ophelia’s children who died in childhood are all listed on the monument. I’m not sure which ones are actually buried in the plot.

By the time Ophelia died in 1903 at the age of 72, she had outlived all of her children save one, son Edwin. Curiously, her name is not inscribed on the monument but her obituary notes that she was to be buried there. Edwin died in 1914 and is also buried in the plot but his name is not on the monument either, although his death certificate states that he was buried there as well.

I did want to share that at the time we visited Pioneer Cemetery in July 2018, we saw this large monument (pictured below) erected by the United Daughters of the Confederacy in 1896 to honor the Texas Confederate dead. Many men buried at Pioneer served in the Confederate Army during the Civil War. The monument, designed by Frank Teich and installed in Old City Park in 1897, was moved to Pioneer Cemetery in 1961. 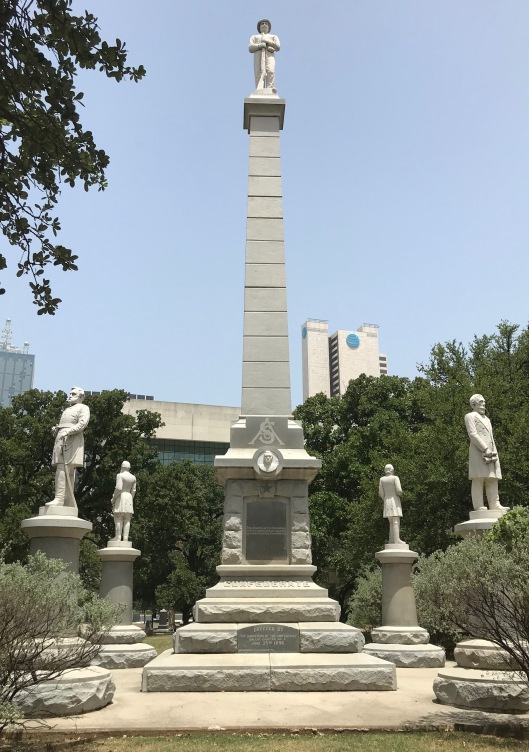 The central obelisk is 60 feet tall with a Confederate soldier at the top. Four Confederate figures (Robert E. Lee, Stonewall Jackson, Albert Sidney Johnston, and Jefferson Davis) are at each corner. All of the figures are 19 feet tall.

I learned this week that efforts to have it removed had been underway for some time. The work to dismantle and remove it began in June 2020. It is now being stored at Hensley Field, part of the Grand Prairie Armed Forces Reserve Complex and the site of the former Dallas Naval Air Station.

We did visit one other cemetery while we were in Dallas, Greenwood Memorial Park and Mausoleum. I’ll be writing about it next time. 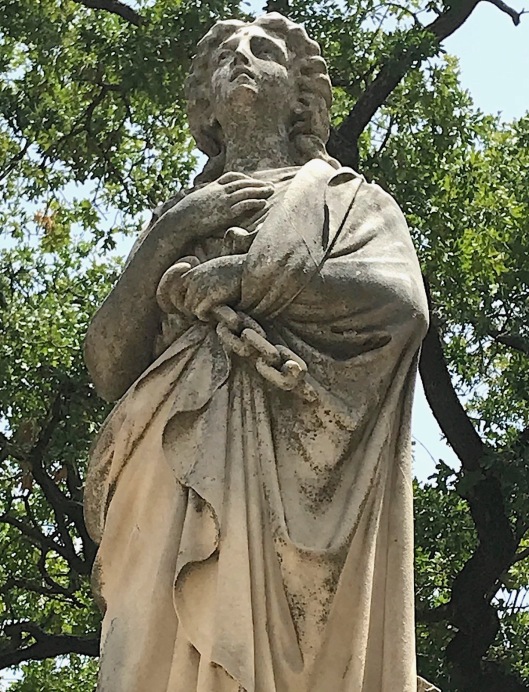 Ophelia Eakins’ name is not inscribed on the family monument.