In this modern age, you don’t even have to wear black to a funeral any more. There are no rules, it seems. I’ve seen people show up in everything from sweatpants to club attire.

Back in the Victorian era, there was a very specific code for what a woman (men were pretty much off the hook) in mourning must wear and for how long. If you didn’t follow it to the letter, you risked being branded a social outcast by those around you.

In the third season of PBS’ popular “Downton Abbey”, Lady Mary follows the dictates of society by wearing jet jewelry in her time of mourning.

The Victorian age officially began in 1837 when an 18-year-old Queen Victoria took the British throne. A few years later, Victoria married her German first cousin, Prince Albert. Their marriage resulted in nine children and was said to be a very happy one.

Franz Xaver Winterhalter’s painting of Queen Victoria and Prince Albert with their children. Most people do not picture her as a happy wife and mother. Photo courtesy of Wikimedia Commons.

Perhaps that’s why when Prince Albert died of typhus in 1861, the Queen went off the rails a bit when it came to grieving her loss. She remained in full mourning for three years. From that day forward, she always wore black and spent a considerable time in seclusion. This earned her the nickname, the Widow of Windsor.

Mourning clothes were supposed to be an outward reflection of a family’s inner feelings.The rules for who wore what and for how long were complicated, and were outlined in popular journals or household manuals which were very popular among Victorian housewives. They were filled with instructions about appropriate mourning etiquette. If your second cousin’s cousin twice removed on your father’s dad’s side died and you wanted to know what sort of mourning clothes you should wear and for how long, you consulted The Queen or other manuals.

The elaborate mourning fashion code tended to isolate a widow in her time of need just as the Queen had done. For the first year, a woman in mourning was not allowed to leave her home without full black attire and a weeping veil. When she did go out, it was supposed to be only to attend church services. Crepe was the material of choice for its dull sheen and lack of richness.

Examples of mourning fashions for widows.

In other words, when you were in full mourning, there was no such thing as throwing on a pair of yoga pants to run to the grocery store for a gallon of milk. You had to send someone else to do it. So although it really mattered what you wore, few people saw it because you were stuck at home!

Middle and lower class women did not have the luxury of buying an entirely new wardrobe for mourning. But they would go to great lengths to appear fashionable in such times. Dying clothing black and then bleaching them out again was quite common. The industry of mourning became so vital to tailors that rumors were spread concerning the bad luck of recycling funeral attire. 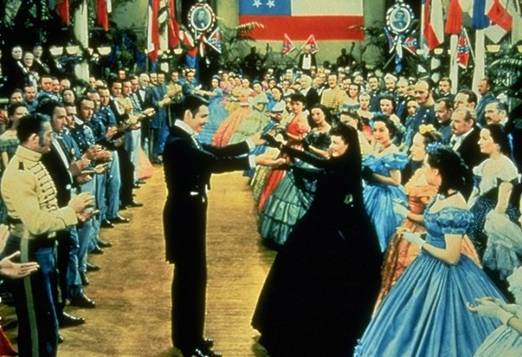 In Gone With the Wind, Scarlett O’Hara broke all the rules of proper mourning by dancing with Rhett Butler at a fancy dress ball. She was supposed to be at home crying for her dead husband.

In nineteenth-century England, a widow was expected to remain in mourning for over two years. The rules were slightly less rigid for American women. 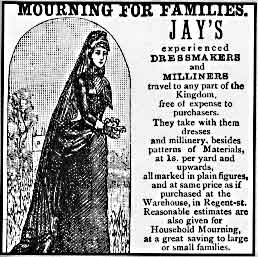 These stages of mourning were observed by widows:

Full mourning, a period of a year and one day, was represented with dull black clothing without ornament. The most recognizable portion of this stage was the weeping veil of black crepe. If a women had no means of income and small children to support, marriage was allowed after this period. There are cases of women returning to black clothing on the day after marrying again. 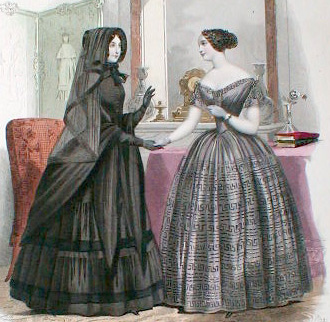 The woman on the left, from an 1855 fashion magazine, is an example of full or second mourning with her black veil, shawl, gown and gloves.

Second mourning, a period of nine months, allowed for minor ornamentation by implementing fabric trim and mourning jewelry. The main dress was still made from a lusterless cloth. The veil was lifted and worn back over the head. Taking their cue from Queen Victoria’s example, older widows often remained in second mourning or half-mourning for the rest of their lives.

Half mourning lasted from three to six months and was represented by more elaborate fabrics used as trim. Gradually easing back into color was expected coming out of half mourning. All manor of jewelry could be worn. A woman now had a bevy of colors to choose from, by comparison. Grey, mauve, purple, lavender, lilac, and white could all be implemented. Subtle prints using any combination of these colors were also allowed. This trend was more popular in the South because of the weather. I can’t imagine wearing black crepe in 90 degree heat. 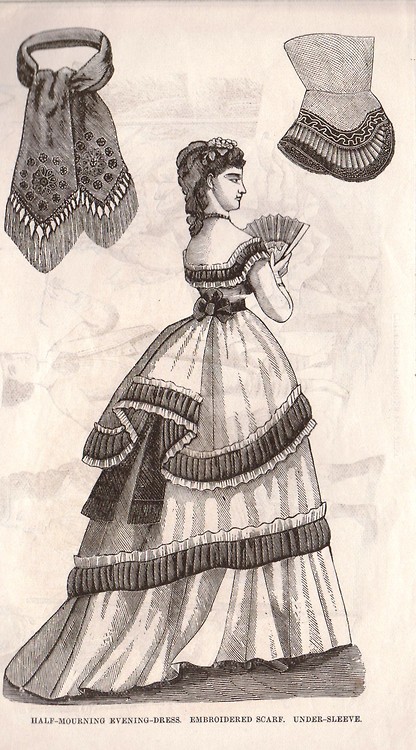 Half mourning finally saw the gradual return of color to a widow’s wardrobe.

The standard mourning time for a widower was two years but it was up to his discretion when to end his single status. Men could go about their daily lives and continue to work. Typically, young unmarried men stayed in mourning for as long as the women in the household did.

Mourning for parents ranked next to that of widows, children mourning for their parents or parents for children being identical. One year was the standard length. Six months in crepe, three in second, and three in half mourning. Second mourning, without full mourning, was suitable for parents-in-law. After one month in black, lilac would follow.

Did you get all that?

Not long after the Queen’s death, the Victorian style of mourning attire faded out. Styles became more relaxed and women became more independent. Black became a fashionable color that transcended death, giving its importance in mourning fashion far less impact. The “little black dress” became a key element of a woman’s wardrobe, but not for grief.

While the pendulum may have swung almost too far back the other way, few would say they desire a return to this kind of lengthy, rule-driven form of mourning. But for the Victorians, for whom death was a large part of life, it seemed entirely natural. 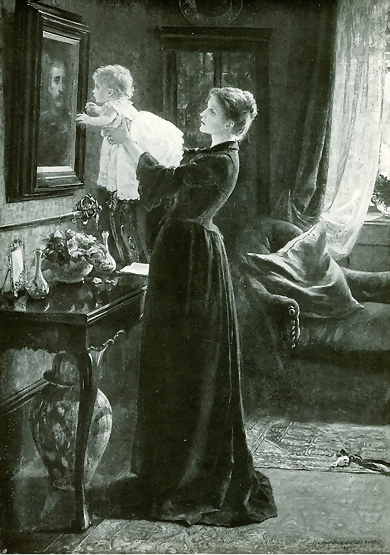 4 thoughts on “Paint it Black: Mourning Fashions in the Victorian Age”