This week, for the first time, I am featuring a guest blogger!

Meet Steve Reagin. We became good friends in high school through the drama department and by being in the same church youth group together. I hadn’t seen or talked to him since 1987 until we made contact on Facebook last year.

This is a picture of Steve from the 80s. Photo courtesy of J. Frank Lynch.

This is me in the 80s with my best friends. Christi, who went with me on my first cemetery trip in Omaha, is on the left. 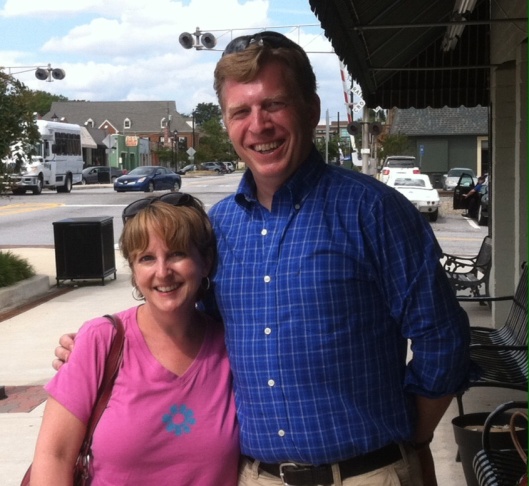 I think we look pretty good more than 20 years later, don’t you?

Here’s a message he sent me in February:

“Hey Traci, If you’re ever in a cemetery around Conyers, Lithonia, or Stone Mountain, and you run across a headstone for “Marvin J. Reagin, Sr.” or some version thereof, give me a yell. That would be my grandfather. No one alive seems to know where he’s buried.”

What happened after that is what Steve has written about in his own words. I know you’ll enjoy reading about how he found many of his ancestors in just one day in a Georgia cemetery:

When my Dad died in August 2007, I began to wonder more about his family. I realized I knew close to nothing about the generations of Reagins before him. When he was a kid, his father was an alcoholic who spent time in and out of jail, and died in a car crash fleeing the police. His mother ran out on the family for a while. My Dad and his brother, Robert, were shuffled amongst his aunts and uncles, and weren’t always treated well. A few years before I was born, Robert died in a car accident as well. Because of this, Dad rarely talked about his family, not even to Mom. I had no concept of a larger family outside of my immediate family.

At Dad’s funeral, I met a cousin who was so close to Dad when they were kids, he was like another brother. He told us stories about Dad as a kid and about my grandfather whom he called “Mr. Joe”. During one of his stories (which always seemed to end with Dad keeping my grandfather out of jail or bailing him out of jail), he stopped, looked right at me, and said I “was the spittin’ image of Mr. Joe.” 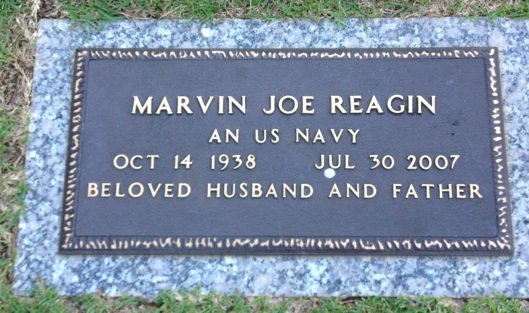 This is the grave of Steve’s father, Marvin J. Reagin, Jr. He is buried in Fayetteville, Ga.

After Dad’s funeral, my sister-in-law, Kara, showed me some information she found on the Reagins through Ancestry.com. She and my parents even tried to find the family land in South Carolina where Dad’s ancestors lived before moving to Georgia. I didn’t pay much attention to this and forgot about it for the most part.

On my way back to my current home outside of Seattle, I realized I had no idea where my grandfather or uncle were buried. We never visited a graveside on a birthday, death anniversary, Memorial Day, etc. The next time I talked to Mom, I asked if she remembered where they were buried. She said no, but assumed they were at Lithonia City Cemetery. This struck me as odd, as I knew she had to have been at my uncle’s funeral. He was the best man at my parent’s wedding and had dated Mom before Dad did. I knew she must have attended his funeral. However, I decided not to push it.

Years later, through Facebook, I started reconnecting with friends I hadn’t seen since before I moved to Seattle in 1993. One of those friends was Traci. After reading some of her blog posts, I sent her a message that if she ever came across the graves of Marvin J. Reagin, Sr. or Robert Reagin to let me know. Traci zoomed into action. In a matter of moments, she was looking up census records, death records, and a website called Find A Grave.com. She didn’t have much luck, but said she would keep an eye out during her adventures.

Some months later, I found out I was going to Atlanta for a work conference. I arranged to stay a few extra days to visit with Mom and see some friends. I asked Traci if she would be interested in exploring some cemeteries with me in search of my grandfather and uncle. She was all over it.

Before we met up, Traci did some legwork to see if she could find anything. She found many of my grandfather’s brothers and sisters in the Lithonia City Cemetery and nearby Turner Hill Baptist Church Cemetery, but no sign of my grandfather and uncle. She said I should be prepared for the reality that they could be in unmarked graves. She did send me a picture of a monument in the Lithonia cemetery that said “REAGIN” that had no names etched into it or any other markers around it.

This is the Reagin monument I found at Lithonia City Cemetery. I feel strongly that although their graves were unmarked, Steve’s grandfather and uncle are buried there. He agrees with me.

As my trip neared, I finally remembered the information that Kara had put together and left with Mom. When I got to Mom’s house in Georgia, I searched Kara’s research for any clues. While there was nothing much about my grandfather besides the listing of his siblings and parents, the story I discovered about my family was incredible!

In contrast to the story I remember hearing about three brothers who immigrated to Georgia from Ireland during the potato famine in the mid-19th century, evidence suggests that my family came from Ireland in 1690s and settled in Maryland. Part of that original family wound up in Newberry County, S.C., where one William Reagin owned a plantation that consisted of 250 acres and many slaves. 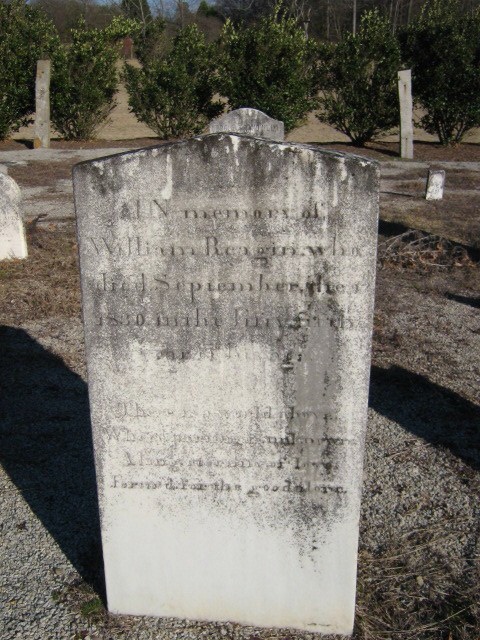 William Reagin owned a plantation in Newberry, S.C. He is buried in the Reagin Family Cemetery in Newberry. It reads: “There is a world above where parting is unknown, A long eternity of love formed for the good alone.” Photo courtesy of Donna Brummett.

When William died in 1830, his estate was divided up between his wife and 10 children. Sometime after that, three of his sons and one daughter left for Georgia including my great-great-great-great-grandfather, James Jones Reagin.

As I was reading this history and talking with Mom, she started to remember some things. Yes, both my grandfather and uncle were buried in Lithonia City Cemetery. She vaguely remembered where they were located and described what she remembered seeing from the graveside (and obelisk across the road, Confederate graves off to the side, a Scottish family nearby).

This enormous magnolia tree is the only tree in Lithonia City Cemetery.

When Traci and I finally got to the Lithonia City Cemetery, a city landscaping crew had just finished mowing and trimming the entire cemetery, so it was very easy to see everything. When I stood in front of the monument Traci had found, I knew that this was where my grandfather and uncle were. It matched my Mom’s description exactly.

I was surprised at how emotional I became, not only because I found where my grandfather was buried, but as I looked around, I saw the name “Reagin” everywhere. The only time I had ever seen Reagin on a headstone was on my Dad’s that I had just seen in person for the first time a few days before. I finally had a sense of a larger family that I never had before, and I found myself crying beside my grandfather’s grave. 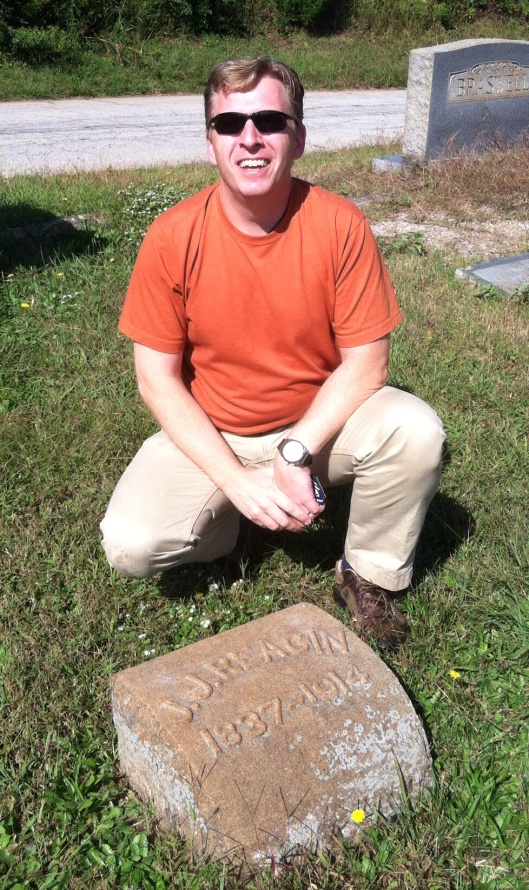 Steve discovered many of his relatives’ final resting places at Lithonia City Cemetery.

As we walked around the cemetery, I started recognizing some of the names that were in the historic information Kara had gathered, which I neglected to bring with me. I started taking pictures of the Reagin headstones that sounded familiar. James, Jones, and Joseph are all common names through the Reagin generations. My middle name is even James. When I showed Mom what I had found, she said, “By the way, your father’s grandparents are in the same plot as his father and uncle.”

As I looked at the family tree, I realized the next person up would be my great-great-great-great-grandfather, James Jones Reagin, one of the sons of William Reagin that moved to Georgia from South Carolina. My information didn’t show where he was buried, but it did note that one of his brothers was buried in the McClung Cemetery near Conyers, and his sister was buried in the Rock Springs Primitive Baptist Church Cemetery near Lithonia. I messaged this to Traci, and she quickly found a listing for both James and a third brother at the McClung Cemetery on Findagrave.com.

By contrast, McClung Cemetery is private so it doesn’t receive the care that Lithonia City Cemetery gets. As a result, it is neglected.

On my last day before heading back to Seattle, I found myself searching for McClung Cemetery in the middle of a residential neighborhood near Conyers. I drove down a dead end road and didn’t see it. I turned around thinking I may not find it after all, but as I headed back to the main road, I noticed what looked like a vacant lot, but there were stone stairs leading up from the road. This was it.

McClung Cemetery is a neglected cemetery. The weeds are waist high. Right in front of me were granite tombstones with “REAGIN” carved or etched into them. It seems there are more Reagins than McClungs in the McClung Cemetery. Some graves are marked only by a single, huge, granite rock. Under a tree, I found a very well preserved stone that said “REAGIN” and under it the names and dates of James and Talitha, my great-great-great-great grandparents. The trees that shelter the tombstone definitely weren’t there when James and Talitha were buried, but fortunately, they protected the couple during the graveyard’s years of decline and neglect.

I eventually found one of James’ brothers grave, and what I think are the broken remains of the other brother’s tomb, as well as their sister later on in a nearby church graveyard. However, as I stood in front of James and Talitha’s grave, I marveled at the fact that the day before, I was unaware of my grandfather, and now I’d discovered five generations of my family. 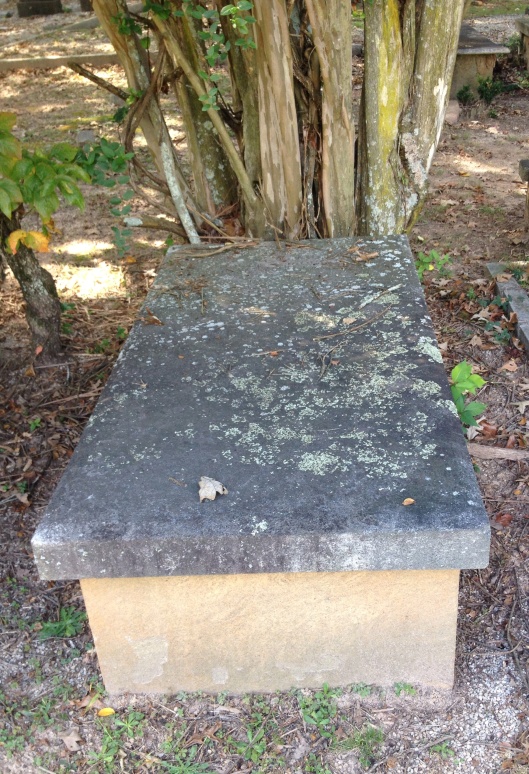 James moved his family to Georgia, and as of right now, we don’t know exactly why. When his father’s estate was divided up, was there not enough money? Did the oldest brother claim the plantation house itself? Did James leave to work in the granite quarries around Lithonia, Conyers, and Stone Mountain? Did he become a stonecutter as some of his descendants did?

For whatever reason, he is why I was raised in Georgia and why I’ll always identify myself as a Georgia native. His decision five generations ago had a hand in shaping who I am today. It also makes me wonder if five generations from now, will there be someone standing at my grave wondering why I moved from Georgia to Washington State?

What will my legacy be?

This is a photo of Steve and his beautiful family today. I think he can be quite proud of the legacy he’s creating.