In the mid 90s, I visited my friend (and fellow Church Chick) Megan in Washington, D.C. The U.S. Holocaust Museum had not been open very long so we went to see it. That day changed my life.

At the beginning of the tour, each guest was given a passport of a real person who lived during the Holocaust and was sent to a concentration camp. It briefly described their life and what happened to them. When I opened mine, I was stunned.

The name inside my passport was Hana Mueller. My niece’s name is Hannah. And my maiden name is Muller. That’s when the Holocaust truly became real to me.

Born in Prague (now part of the Czech Republic) in 1922, Hana was reading John Steinbeck’s The Grapes of Wrath in her apartment when she was taken by the Nazis. Despite enduring months in two different concentration camps, Hana was freed when her work crew was abandoned by the SS as liberators approached in May 1945. To watch videos from 1990 of Hana talking about her experiences, you can visit the museum’s website. 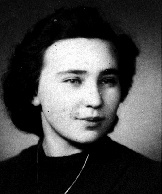 Hana Mueller was reading a book by Steinbeck when she was taken by the Nazis. Steinbeck has always been one of my favorite authors.

My father’s roots are in Germany. The Mullers came from the town of Konz in the Rheinland, in the Southwest. My great-great grandfather, John Henry Muller, arrived in the United States in 1866. He was a carpenter and a Catholic. But despite the fact Hana was from Prague and a Jew, I thought that girl could have been me. 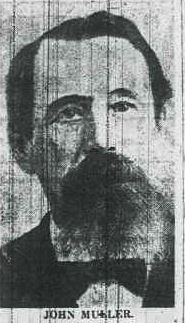 This picture from his newspaper obituary is the only photo I have of my great-great grandfather, John Henry Muller. He came to the U.S. in 1866 and worked as a carpenter up until his death in 1926.

Ever since then, my interest to learn as much as possible about the Holocaust has been almost obsessive. I’ve read countless memoirs written by Holocaust survivors and seen over a hundred hours of documentaries. I’ve read The Rise and Fall of the Third Reich all the way through. It’s a subject I never tire of learning more about.

When I heard Atlanta had a cemetery with a Holocaust Memorial, I knew I had to visit it. That’s when I discovered Greenwood Cemetery, located off Cascade Road in Southwest Atlanta.

Greenwood Cemetery opened in 1907. Its diversity is worth noting. Hundreds of graves are for Jews who made Atlanta their home. I had never seen Jewish headstones up close before, except at Oakland Cemetery. There’s also an entire section for those of the Greek Orthodox faith, complete with a small chapel. A very small area belongs to the Chinese, perhaps 20 graves in all. 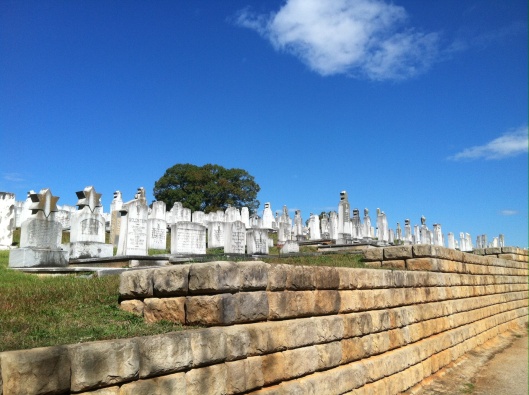 Row upon row of Jewish graves at Greenwood Cemetery. Usually, the front inscription is written in English and the Hebrew version is written on the back.

But what truly separates Greenwood Cemetery from others is its Holocaust memorial. Built in 1965, the “Memorial to The Six Million” is a small granite open-air structure. The funds to build it came from a group of 100 Holocaust survivors living in Atlanta. In 2008, the Memorial was added to the National Register of Historic Places. It is the only Holocaust memorial in Georgia to have that distinction. 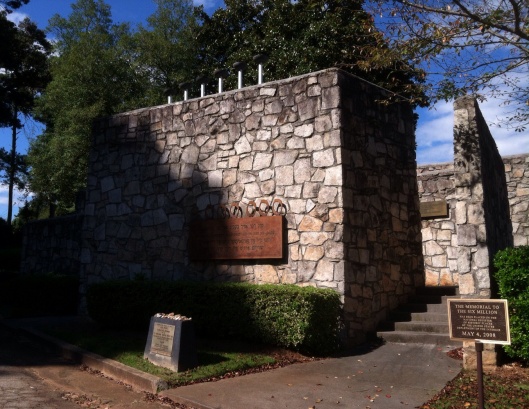 The Memorial for the Six Million is small but impressive. You can see the six white “candles” above the top edge.

What catches your eye immediately are the six 19-foot tall pillars in the middle of it. They represent the estimated six million Jews who perished as a result of the atrocities of the Holocaust. During special ceremonies at the Memorial, these “candles” are lit as an act of remembrance for those who died.

Inside, on the walls, are plaques inscribed with the names of hundreds of people (with surviving family members and descendants that reside in Atlanta) who died in the concentration camps scattered across Europe. Entire families are listed, their lives snuffed out by the Nazi regime. The pillars are anchored by a large, black base that resembles a casket. 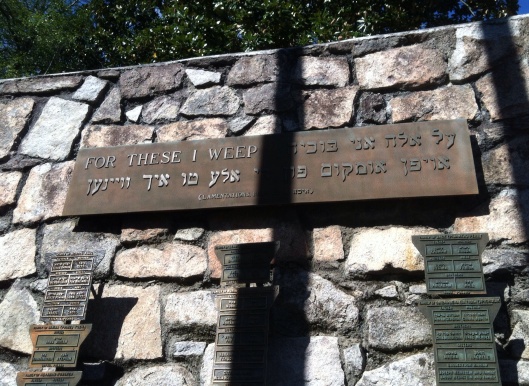 This metal plaque is inscribed in both English and Hebrew. “For these I weep…” is from Lamentations 1:16 of the Old Testament.

On the day I visited Greenwood and the Memorial, it was a stunningly beautiful sunny day with a hint of fall in the air. Nobody else was around as I quietly entered. It is a place of reverence and remembrance. As I scanned the names on the wall, it was like being back at the Holocaust Museum in D.C. The huge number of six million becomes much more personal when you see the actual names of people who died. 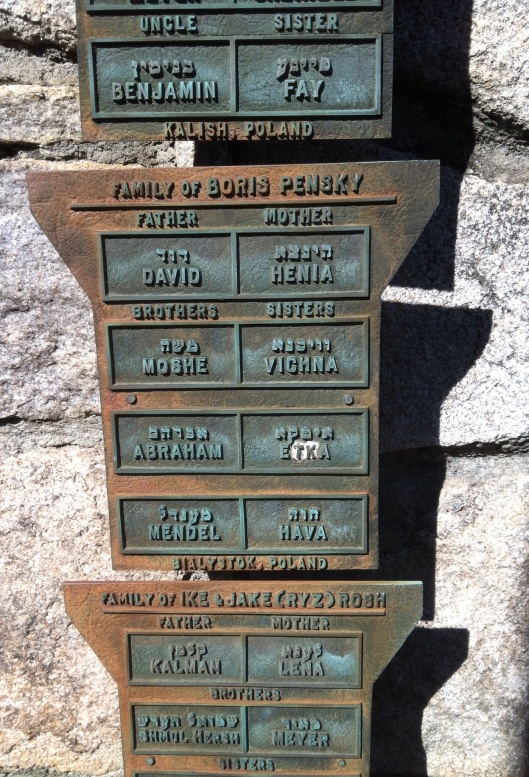 Entire families perished in the Nazi concentration camps and ghettos. Many came from Poland, which surrendered to Hitler in September 1939.

Also within the memorial is an urn containing human ashes brought from the concentration camp at Dachau.

There is a bit of controversy attached to the Memorial. Outside of it are buried four bars of soap that are purported to have been made by Nazis from the fat of Jewish Holocaust victims. A Jewish soldier who was part of a U.S. force that liberated a concentration camp brought them home after the war. They were forgotten until his wife found them in their Dekalb County basement in 1970. They are stamped “RIF”.

Historians say the initials stand for Reich Industrial Fat. But when the bars were found, the “I” was widely interpreted as a “J,” and some people thought the initials stood for the German translation of Pure Jewish Fat.

After the bars were discovered, the couple called a local rabbi who consulted with Jewish scholars and planned a burial at Greenwood. The bars remain buried there, although I could not find the flat stone marker where they are located. 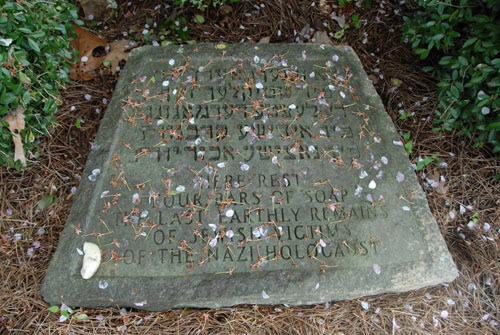 This is a picture of the memorial stone where four bars of soap purported to be made from the remains of Jews killed in the Holocaust are buried. Historians do not believe that the Nazis ever did this. Photo courtesy of Anneke Moerenhout.

In 2000, a Jewish architect from Atlanta named Ben Hirsch (his parents and two siblings died in concentration camps) wrote a book that included his belief that the Nazis did indeed make soap from Jewish victims. Hirsch’s uncle’s unpublished writings describe how he was forced to work in the concentration camp crematories and saw it himself.

Most historians contend that while the atrocities enacted by the Nazis were horrific, there is no substantial proof that this soap making actually took place. Because of this sentiment, the U.S. Holocaust Museum barred a book signing for Hirsch there.

Regardless of who is right or wrong, the Memorial for the Six Million at Greenwood Cemetery is a sacred place that sends the message it creators originally hoped to get across. Such a tragedy must never be repeated. That’s why remembering it is so critical.

We must never forget. 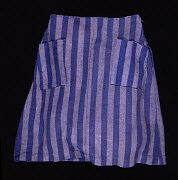 This is the skirt Hana Mueller wore as a concentration camp prisoner. It is on display at the U.S. Holocaust Museum in Washington, D.C.