Sometimes you have to dig deep to find something special.

John Bayne, a kind reader of my blog, recently contacted me about a project he’s working on about Westview Cemetery. I wrote about Westview a few months ago. He had a list of famous people buried at Westview whose graves he hoped to photograph. As you can imagine, I was more than willing to help with that. In the course of that work this week, I discovered Madge Bigham.

You’ve probably never heard of her. I had not until John gave me her name. No picture of her has survived. But in the early years of the 1900s, Madge Alford Bigham was a famous children’s author. She also founded the West End Kindergarten, one of the first of its kind in Atlanta. Her career, for a woman, was beyond her time. But today, she is largely forgotten or unknown.

Overheard in Fairyland was one of Madge Bigham’s many popular children’s books.

Madge’s grave was last on my list for the day and all I knew was that she was in Section 16, which contains taller stone monuments. You can even see some of the names from the road. But I couldn’t see a Bigham among them as I began to “hop” down the rows. An hour later, as I reached the front end of the section, I was tired, cranky and ready to leave. But my foot scraped an indentation in the grass. Not willing to give up on Madge, I got on my knees and began brushing and pulling away dead grass and weeds with my bare hands.

Hidden under the grass, I found the narrow, flat gravestone for Madge’s sister, Eugenia Bigham. Beside her were Madge, sister Kate, and brother James. All of them were totally covered with a mesh of grass clippings from multiple mowings that had grown over them. Had I not stopped, I would have walked right over them. 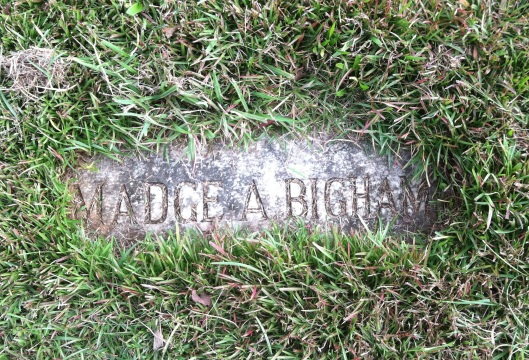 Madge Bigham’s simple, flat grave marker lay hidden under grass and dirt until I found it this week. She and her siblings were hidden from sight.

Something told me there was much more to Madge than her simple grave marker. Later, I got on the Internet and started learning about an amazing woman who stepped outside society’s confines to teach children and share her imaginative stories with them. What I learned about her is mostly thanks to the efforts of Atlantan Tommy Jones’ blog, tomirtonics.com. What you read about Madge here came mostly from his research.

Madge was the daughter of Methodist minister Rev. Robert William Bigham. When his first wife, Charlotte, died in 1871, Rev. Bigham was left to care for his eight young children. He remarried and the Bighams had at least four more children. Rev. Bigham wrote a number of children’s books himself, the most famous being Vinny Leal’s Trip to the Golden Shore.

Madge was born in LaGrange, Ga. in 1874, and attended the Female Academy there. She continued her studies at the Lucy Cobb Institute in Athens. In 1896, she graduated from the Georgia Woman’s College (then in Covington). By 1902, she was principal of the Atlanta Free Kindergarten, located on Fort Street east of downtown.

The first kindergarten in the United States was formed in 1856. Established in 1895, the Atlanta Free Kindergarten Association was part of an international movement that began in Europe in the 1840s. The Association’s president in the early years, Nellie Peters Black, was an advocate for free kindergartens and hospitals, enforcement of child labor laws, as well as for the admission of women to the University of Georgia and the Georgia Bar.

The Bad Little Rabbit was just one of Madge Bigham’s books that young children clamored to have read to them.

Madge’s brother, James Whitaker Bigham, purchased a home on 124 (now 503) Peeples Street in Atlanta’s West End. James, along with his spinster sisters Kate, Madge and Eugenie, never married. The four siblings moved into the house and probably by 1911, they had added an addition in the back for Madge to open the West End Kindergarten. The house was near the Wren’s Nest, home of prominent author Joel Chandler Harris (who wrote the Brer Rabbit stories).

By that time, Madge was already following in her father’s footsteps to become a noted author. Her first book, Stories of Mother Goose Village, was published in 1906. More books were to follow, including Sonny Elephant, Fanciful Flower Tales, and The Bad Little Rabbit.

Sonny Elephant is a story about a baby elephant and his adventures. It is probably her most remembered book and was reprinted several times.

Celestine Sibley wrote about one of Madge’s stories in her syndicated newspaper column in 1970. “The Story of How Apples Got Stars Within” comes from Overheard in Fairy Land. In the tale, a little apple tree loved the evenings when she could gaze at the canopy of stars stretched overhead. Her wish to have just one star of her own was overheard by the Fairy Queen, who promised the little tree that if she worked hard to grow straight and tall, she would get her stars one day.

The little tree did just that and grew tall, eventually blooming with beautiful pink blossoms. When the blossoms were gone, little brown seeds took their place. That’s when the Fairy Queen returned to grant that wish. The tree, now big, had forgotten about it and told the Fairy:

“That was a foolish wish of mine. But if stars you have to give, give them, I pray you, to my baby seeds.” So that is why, when you cut your apple through the center of the circle side, you find brown baby seeds nestled in a five-pointed star.

When the Great Depression hit in the 1930s, Madge was forced to close her beloved West End Kindergarten. Her other unmarried siblings died as the years went by and she found herself caring for the house with her brother Ernest’s widow, Mary, and their children. Madge died on August 11, 1957. 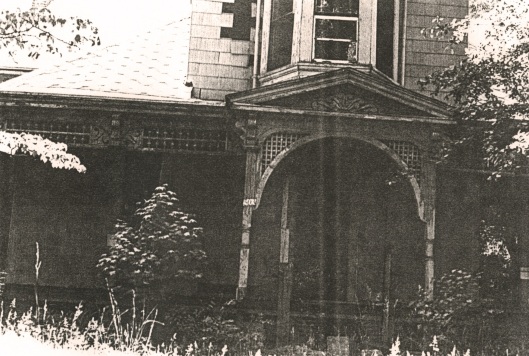 This is thought to be the condition the house was in when Dr. Hammonds bought it in the late 70s. He died shortly after he finished restoring it. Photo courtesy of Tommy H. Jones.

Eventually, the house (which was in such bad shape it had been condemned) was purchased by Dr. Otis Thrash Hammonds and completely renovated. After the doctor’s death from leukemia in 1983, the house sat vacant until Fulton County purchased it. Today, it is the Hammonds House Museum and features Dr. Hammonds extensive African-American art collection. The sounds of children have returned to the house where Madge taught her students. 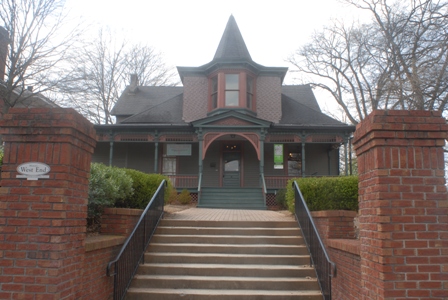 Today, the Hammonds House Museum contains an impressive collection of African-American art. Much of it was collected by Dr. Hammonds over the course of his life. He died in 1983.

Unlike Joel Chandler Harris, Madge Bigham’s name slid into obscurity. Occasionally, her books show up on eBay or in a rare book collector’s shop. Like her grave, her amazing life has become obscured in a modern era in which stories about heavily merchandised animated characters have upstaged happy little apple trees. I hope one day she gets the recognition she truly deserves.

Don’t worry, Madge. I’ll be back to make sure you keep seeing those stars at night.