UPDATE:  The Heard Cemetery court case was settled privately not long ago and is safe from development or having any homes built on it. According to this article, a key to the case was the discovery of an old deed that granted the Heards’ male heirs ownership of the cemetery in perpetuity.

As you’ve learned from this blog, small but remarkable cemeteries can be tucked away in some surprising places. This week I visited one I read about last year and it’s embroiled in a legal battle that shows no sign of being resolved anytime soon.

Heard Family Cemetery is located in Fulton County at the end of Heards Drive, a narrow road lined with multi-million dollar homes. It’s a quiet haven, with about 30 or so visible grave stones with many more unmarked. Unlike some neighborhood cemeteries slowly sliding into ruin under vines and branches, this one is lovingly cared for by its neighbors.

This area is also near the site of what was once called Isom’s Ferry. If you’ve lived in Atlanta for any length of time, you know that many of the roads are named after the pioneer-operated ferries on the Chattahoochee River during the 1800s, such as Paces, McGinnis and Johnson. Isom’s Ferry was operated by James Isom until 1868. 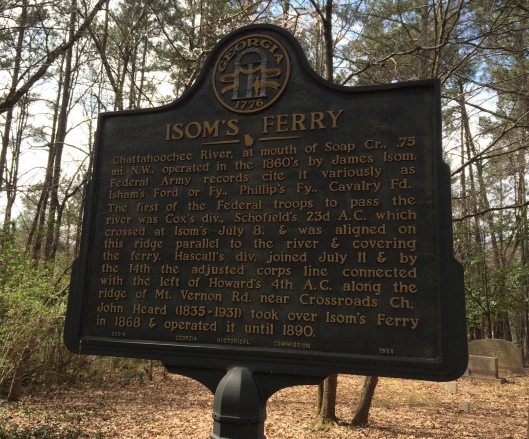 This historical marker at the Heard Family Cemetery explains the pivotal role of Isom’s Ferry (now known as Heard’s Ferry) during the Civil War.

Located at the confluence of Sope Creek and the Chattahoochee River, this land is historically important because Union troops first crossed here on their way south to Atlanta during the Civil War. A well-written article by Kimberly Brigance, Clarke Otten and Michael Hitt describes the events that took place in July 1864.

This map shows the location of the Heard Family Cemetery and where Union troops crossed the nearby Chattahoochee River via Sope Creek on their way south to Atlanta. Map courtesy of Reporter Newspapers.

During that summer, President Abraham Lincoln faced re-election and his prospects were not good. Confederate troops had racked up a high number of Union casualties at the Battle of Kennesaw Mountain. General William T. Sherman knew that for Lincoln to have any chance of being re-elected, Atlanta had to fall by November. The Chattahoochee was the last natural barrier between Union troops and Atlanta and Isom’s Ferry was thought to be the weakest point at that time.

On July 7, Sherman sent troops to the Sope Creek area with orders of little noise and no fires. On July 8, Union soldiers on ridges along the Sope Creek side of the river opened a barrage of rifle and cannon fire aimed at the Confederate position. About a hundred soldiers came out of the woods toward the river, firing across it at the water level.

Pontoon boats like this one ferried Union soldiers across Sope Creek so they could advance south to Atlanta. Photo courtesy of Reporter Newspapers.

From behind the ridge, 25 pontoon boats carrying soldiers went into Sope Creek and headed downstream toward the opposite bank of the river. Confederate gunners are reported to have only gotten off one shot before being overtaken. By day’s end, Federal engineers had two pontoon bridges in place shuttling more men and equipment into Sandy Springs. Union troops held three hill tops, one being the home of the Heard family and present location of the Heard Family Cemetery. 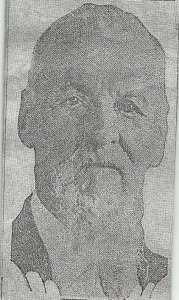 This newspaper photo of Judge John S. Heard is from his later years. His annual birthday barbecues at his farm were attended by many, including his family members.

Judge James S. Heard was born to William “Buck” Heard (a blacksmith) and Rebecca Gill Heard in 1835. During the Civil War, Judge Heard served in the Ninth Battalion of the Georgia Artillery and is said to have been present at Appomattox when General Robert E. Lee surrendered to General Ulysses S. Grant. In 1868, Judge Heard bought Isom’s Ferry from James Isom and operated it until 1890 so it was renamed Heard’s Ferry.

Judge Heard’s first wife, Abie, was Isom’s daughter and together, they had several children. Some died in infancy but several lived to adulthood and had families of their own. 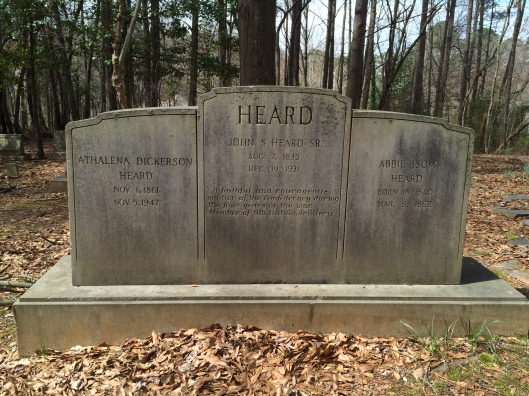 Judge John S. Heard is buried with his first wife, Abie Isom Heard, and his second wife, Athalena Dickerson Heard. Several of his children and grandchildren are buried around him.

After Abie died in 1882, Judge Heard married Athalena Dickerson. She was about 20 years his junior and they, too, had several children. Judge Heard lived to the ripe age of 96, celebrating his birthday each year on August 7 with a festive barbecue at his farm that was attended by many locals and family members.

Judge Heard sits between two of his granddaughters at the last birthday barbecue he celebrated in 1931. He wanted to be buried on his land among his family when he died.

The stones at the Heard Family Cemetery tell stories of lives short and long, especially children who died in infancy. Many of them are the grandchildren of Judge Heard and his wives. 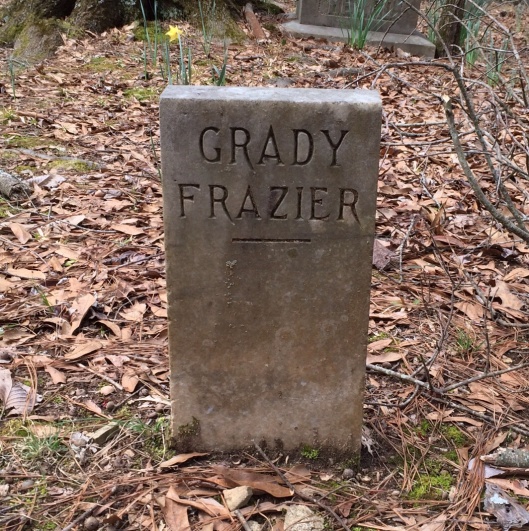 Grady Frazier was the son of Kansas Heard Frazier and William Frazier, and grandson of Judge Heard and his first wife, Abie.

James “Jim” Heard was Judge Heard and Abie’s son. As a police officer, Jim made headlines when he was shot and killed during the 1906 Atlanta race riot. He and his 19-year-old bride, Stella Sowers, had been married less than a year. Originally buried at Oakland Cemetery in Atlanta, Jim was moved several months later to Heard Family Cemetery. 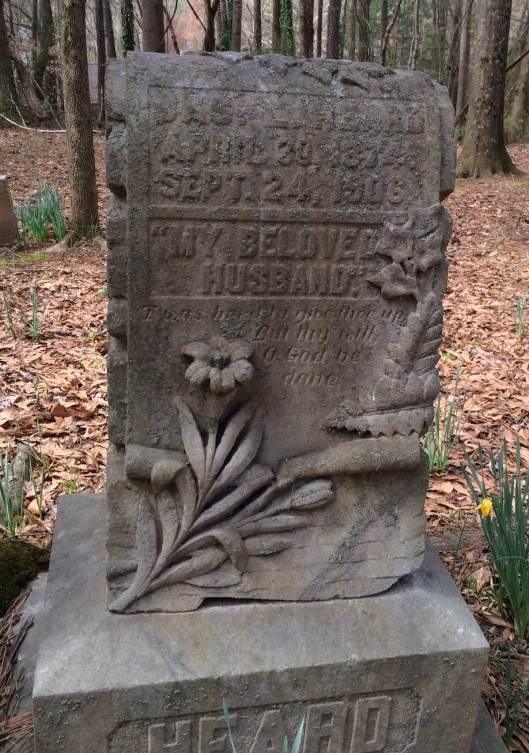 James “Jim” Heard was a policeman who was shot and killed during the 1906 Atlanta race riot. He was only 42 at the time.

One of the more intriguing graves is that of Judge Heard and Abie’s eldest son, Newton Heard and his wife, Ellen. A tree is growing up the back of the stone and is actually notched on top of it, using it as a support. I don’t see that very often.

Newton Heard was the eldest son of Judge Heard and his first wife, Abie. A tree appears to be using his grave as a support. Newton is buried with his wife, Ellen.

In 1900, with hopes of creating a permanent resting place for himself and his descendants, Judge Heard deeded the cemetery to his family. All went well until the mid-1990s when Fulton County, for reasons unknown, began to tax the property despite the fact cemeteries are tax exempt.

What happened next has been reported differently by various media outlets so I’ve done my best to piece things together. The property wound up on the tax assessor’s delinquent list. In December 2007, Mary Ann Elsner filed an affidavit of descent stating that she was the rightful inheritor. Elsner (listed as Mary Ellis in most of the older records) signed legal documents claiming to be the sole surviving heir of Carl Heard Jr., her brother, who was a descendant of Judge Heard.

Attorney Christopher Mills filed a lawsuit in 2012 against the City of Sandy Springs for blocking his attempt to build on property where the Heard Family Cemetery is located. Photo from the website of Busch, Slipakoff & Schuh, LLP

Mills’ attempt to build on the portion of the property not containing graves (which is in dispute since a number of unmarked graves exist) was blocked by the City of Sandy Springs, who refused to give Mills a permit to build. Mills sued the city in August 2012, arguing that the land is already zoned for residential use.

All of this has not gone unnoticed by the Heard descendants and neighbors living around the cemetery. They stand with the city in wanting the cemetery to remain as it is and don’t want Mills to build on the property.

Wright Mitchell, the attorney representing the Heard descendants, said as long as there are descendents of Judge Heard that would be eligible to be buried on the land in the future, the entire property should be considered burial grounds and restricted from being used for another purpose.

In a WSB-TV report, he said, “Mr. Mills may be building his house on top of graves that haven’t been identified yet.”

“I don’t think it matters how much of it is being used, there are decedents who do plan to be buried there in the future and that’s what the land was set aside for,” Heard descendant Nancy Smith said at a 2013 hearing about the lawsuit.

Georgia Court of Appeals judges John J. Ellington and Carla Wong McMillian heard the case in September 2014. After deliberating on the matter, they will send their decision to the parties’ lawyers at a date yet to be determined. It could take months before this happens so the fate of the Heard Family Cemetery remains in limbo.

Several Heard family descendants attended a hearing in 2013 to voice their opposition to plans for a house to be built on the property where the Heard Family Cemetery is located. Photo by CBS 46.

In the meantime, Heard descendants and cemetery neighbors have created a Save the Heard Family Cemetery Facebook page here they post updates on the case. They also have a PayPal account where supporters can contribute to paying for the legal fees incurred.

It’s heartbreaking that an error that began with the taxation of a cemetery that’s exempt from it was the catalyst for what may spell the end for a historic site. Mr. Mills contends that he can build on the remaining part of the property. But having seen the property myself, I think it would be very hard to do so without disturbing the graves (including the unmarked ones you can’t see).

As I walked around the cemetery this week, a gentle breeze hinting of spring stirred the daffodils as I examined the old stones. Unlike many family cemeteries, it’s not fenced off or locked up. The Heard Family Cemetery is a lovely oasis amid a neighborhood that takes care of it and wants it to remain undisturbed, for both Judge Heard’s descendants and newcomers like me seeing it for the first time.

I think that’s something well worth saving. 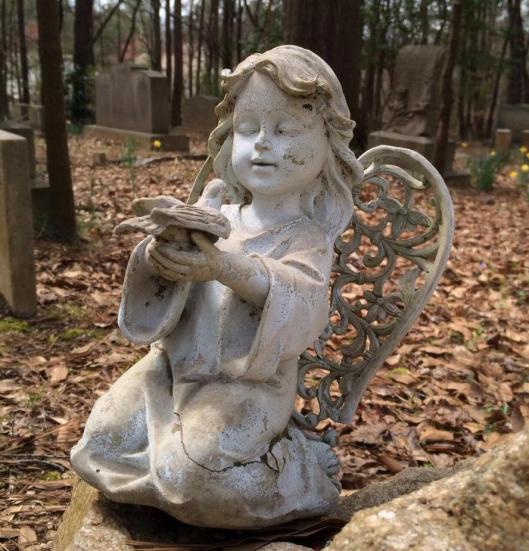 7 thoughts on “History at Risk: Saving the Heard Family Cemetery”