I’m still in South Carolina but this week, we’re exploring a different part of the Sea Islands that edge the state’s shore.

I’ve mentioned before that every summer, my in-laws invite us to join them for a week at Folly Beach. Folly Island is located in front of James and John Islands. We drive through James Island to get to Folly Beach and located on the main road is James Island Presbyterian Church (JIPC).

It wasn’t until last summer that I explored the cemetery (or rather cemeteries) in front of JIPC. I didn’t know I’d be encountering the grave of the man who inspired one of Gershwin’s most famous musicals.

James Island Presbyterian Church was founded sometime around 1706 by the Rev. Archibald Stobo (who came to America from Darien, Scotland in 1699) with land donated by hatmaker Johnathan Drake. The first church building was erected in 1724 but it burned down during the Revolutionary War period.

The current James Island Presbyterian Church building was erected in 1910. This is just the front entrance.

The second building also burned down, supposedly due to an accidental fire during the Civil War, and was replaced by a simple wooden building. That’s when it earned the name “the Burned Church”. This third building was torn down and the current Gothic Revival structure built in 1910, with an addition put on in the 1950s.

JIPC actually has two cemeteries separated by a line of azalea bushes. The larger cemetery (in terms of space) closest to the road is the cemetery that was dedicated to black burials when slaves were members of the church. In 1853, over 200 of the church’s membership was black. In fact, James Island was predominantly black until after the turn of the century with about 150 whites and over 4,000 African-Americans in 1914.

After the Civil War, freed blacks built their own church nearby but continued to bury their loves ones at what is sometimes referred to as the “Burn Church Cemetery” at JIPC. I saw burials as recent as the 2000s so it is still an active cemetery.

Although black members of James Island Presbyterian Church built their own church after the Civil War, they continued to bury their dead in the Burn Church Cemetery.

On the other side of the hedge is the official JIPC cemetery, which was for white members in the church’s earlier days but is now open to all members of any race. I’ll get to that side of the azalea hedge next week.

One of the very first stones I saw in the Burn Church Cemetery was fairly new from 1986, erected for an impoverished man who died in 1924. His name was Samuel Smalls but he was better known as “Goat” or “Goat Cart Smalls” because he got around Charleston in a goat-drawn cart due to his physical disabilities. It’s said he sold peanut cakes from his cart. Smalls was known to hang out at a gambling spot on Charleston Neck called the Bull Pen, where he shot craps while his goat faithful waited outside. 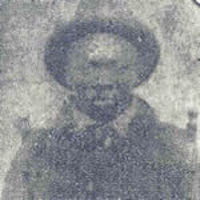 Samuel “Goat” Smalls probably suffered from polio, making it nearly impossible for him to walk. He and his goat-drawn cart weres well known around Charleston.

Playwright DuBose Heyward read about Smalls in a News & Courier article recounting Smalls’ arrest after he’d tried to shoot a woman. The police caught Smalls after he and his goat led them on a chase down several alleys. This article is said to have inspired Heyward to base the character of Porgy on Smalls in his novel “Porgy and Bess” that was published after Smalls died in 1925.

DuBose and his wife, Dorothy, turned his novel into a play that debuted in 1928 at the Guild Theater in New York with an all African-American cast. But it was George Gershwin’s musical based on Heyward’s novel that debuted in Boston in 1935 that truly got the world’s attention. I learned that after two attempts to desegregate the Dock Street Theater, the opera would not be performed in Charleston until 1970.

Samuel “Goat” Smalls finally got his own grave marker in 1986.

Smalls, who was born on James Island, was buried in an unmarked grave at the Burn Church Cemetery. It wasn’t until 1986 that a marker was made and placed in his honor. It is close to the edge of the JIPC parking lot and easy to find.

As I’ve found in a number of African-American cemeteries, the markers at Burn Church Cemetery encompass a mix of styles. The older slave graves are not marked, the wooden crosses used decades ago long since gone. But you can see some other marker styles and epitaphs unique to this cemetery. I also discovered dates that often didn’t match death certificates.

The marker for Henry Graham is a good example of the rustic styles I saw. Born in 1884 on James Island to Ben Graham and Susan Harker Graham, he was married to Florence Brown Graham. They had at least two children according to the 1920 U.S. Census.

The font of the words inscribed on Henry Graham’s marker can be found on several at Burn Church Cemetery.

At the time of his death in 1926, Henry was a cook at the U.S. Quarantine Station located at Fort Johnson on James Island. Starting in 1922, the facility was used for ships entering Charleston. The buildings are now owned by the Medical University of South Carolina but a 2016 news report indicated MUSC wanted them torn down due to their poor condition.

The “K of P” written at the top of Henry’s marker indicates he was a member of the Knights of Pythias, the first fraternal organization to receive a charter under an act of Congress. It was founded by Justus H. Rathbone, who was inspired by a play by Irish poet John Banim about the legend of Damon and Pythias. This legend illustrates the ideals of loyalty, honor, and friendship that are the center of the order.

I saw a number of other markers with the same font style and the anchor entangled in a vine at the top. The anchor often indicates a strong faith in Christ. Hebrews 6:9 refers to it as “which hope we have as an anchor of the soul, both sure and steadfast”.

Joe Gilliard’s grave marker is almost exactly the same, including the epitaph. The death date recorded on it is May 25, 1925 but his death certificate says 1924. Both his marker and death certificate show he was born in 1826. The son of Cuffie and Alice Gilliard, Joe was probably born into slavery and spent his life on James Island.

Having lived to almost 100 years old, Joe Gilliard died of tuberculosis in 1924.

Nancy Fludd Washington’s marker has the same font (type style) but the decoration at the top is simpler. Oddly, her death certificate has her birth year as 1884 when it is actually 1871 on her marker. She died at the age of 60 from a heart ailment. 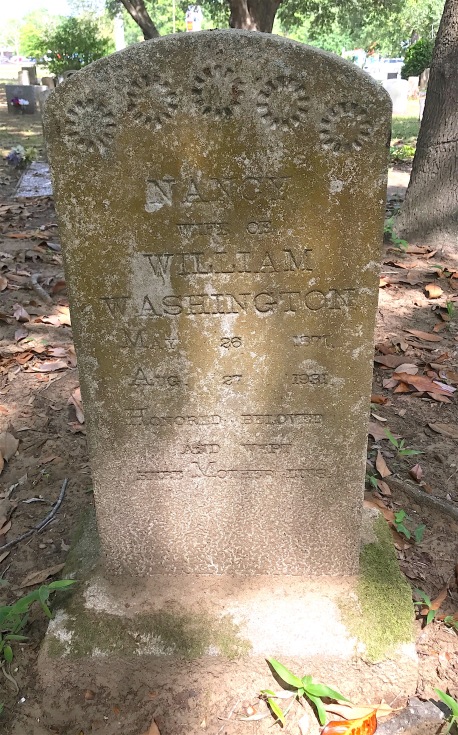 Nancy Fludd Washington’s sons are buried near her but her husband, William, appears to be buried elsewhere or has an unmarked grave.

Nancy’s son Jessie James Washington has a much more rustic stone. Born in 1911, he died of pneumonia in 1947 on New Year’s Eve.

Jessie James William died at the age of 38 from pneumonia.

Finally, I’d like to include the grave of Irene Chavis Gilliard. She was the daughter of Paul and Betsy Matthews Chavis and spent her life on James Island. She died of influenza in 1949. Her grand-nephew, Eugene Frazier, recalled that on the day she died the family learned that her sister, Alice Chavis McNeal, had also passed away. 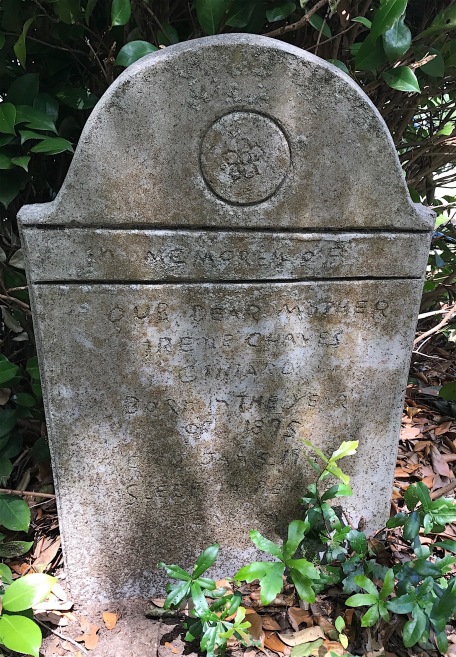 Irene Chavis Gilliard’s grand-nephew remembers when she sold vegetables in downtown Charleston from a pushcart.

Oddly, her death certificate (which misspelled her last name as “Galliard”) indicates she was born in 1905 but her crudely etched marker says 1895, as does her grand-nephew’s book “A History of James Island Slave Descendants & Plantation Owners: The Bloodline” published in 2010.

Next time, we’ll peek over the azalea hedge and explore the JIPC cemetery.

1 thought on “Exploring James Island Presbyterian Church’s Cemeteries: The Burned Church and Gershwin’s Inspiration for “Porgy and Bess”, Part I”